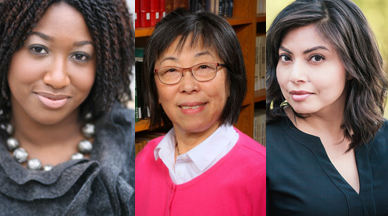 Announcing the Newest Members of Our Board

We’re proud to announce three new additions to our Board of Directors: Pam Aguilar, Kisha Cameron and Kayo Denda

Pamela A. Aguilar is Senior Director of Programming and Development for PBS. In this role she identifies, develops and oversees the production of original Primetime content across various genres: history, science, nature, arts & culture and independent film. She works closely with Latino Public Broadcasting, to co-curate the nationally broadcast documentary series, VOCES and with co-producing partners like VOX Entertainment and the BBC; and with producing member stations like WGBH, WNET and TPT. Her latest project, No Passport Required with Chef Marcus Samuelsson (VOX), is a multi-platform docu-series that celebrates America’s diverse cultures. Other credits include, Big Pacific, narrated by Daniel Dae Kim (NHNZ), The Wonders of Mexico, narrated by Anthony Mendez, 9 Months That Made You (BBC), and Going to War (VULCAN). Pamela serves on the board of Women Make Movies and NALIP’s Diverse Women in Media Advisory Committee; a graduate of The New School University in New York City, she hails from the Golden State of California.

Kisha Imani Cameron is currently the Chief Talent Development Officer at Ghetto Film School, an award-winning non-profit that educates, develops and celebrates the next generation of great American storytellers. Previously, Ms. Cameron served as COO of Ghetto Film School, and Consultant of Scripted Programs for the Tribeca Film Institute. Ms. Cameron was an Associate Producer on SOMETIMES IN APRIL, the HBO film based on true events surrounding the 1994 genocide in Rwanda; and on Spike Lee’s controversial film, BAMBOOZLED. As president of her production company Completion Films, Ms. Cameron for 10 years had a first look producing deal with Focus Features. With then CEO James Schamus, she created and ran the FOCUS FEATURES AFRICA FIRST SHORT FILM PROGRAM as Executive Director.  A long-time champion of diversity of all kinds in entertainment, Ms. Cameron passionately works in the artist development space as coach and trainer via the Visionary Legacy Project. She has led artist development workshops for South Africa’s ATFT, Film Independent and Chicken & Egg.

Kayo Denda is the Head of the Margery Somers Foster Center and Women’s Studies Librarian at Rutgers University Libraries. She is the liaison librarian to the Women’s and Gender Studies Department, Institute for Women’s Leadership, Institute for Research on Women, Center for Women’s Global Leadership, and Douglass Residential College. Denda has been involved in a number of projects centered on Japanese-American community that settled in New Jersey to work at the Seabrook Farms, after their internment experience during the WWII.  She led efforts in creating the CWGL: Center for Women’s Global Leadership Poster Collection, a digital collection of 292 posters published by 166 international women’s activist groups based in 24 countries between 1990 and 2005 and collected by Rutgers, Center for Women’s Global Leadership.  Denda is also a co-author of the book Douglass Century: Transformation of the Women’s College at Rutgers University that will be published by Rutgers University Press in 2018.