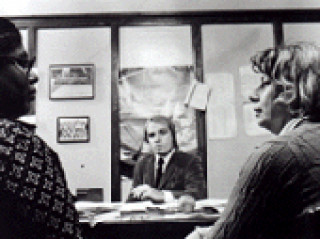 A film by Jackie Shearer

A fight between an African American and a white schoolgirl in Boston is explored in all its complexity in this fact-based drama from one of the producers of EYES ON THE PRIZE.

Jacqueline (Jackie) Shearer was an independent producer and director of documentary films about African Americans. Shearer was born in Boston and graduated from Brandeis University. Her films included "A Minor Altercation" (1978), and "The Keys to the Kingdom" and "The Promised Land" (1989), two segments of the Emmy Award-winning "Eyes on the Prize" (1991), a documentary series about the civil rights movement that aired on public television. She also produced "The Colored 54th Regiment" (1991) which also aired on public television. Her final project "Didn't Take Low," also known as "Addie and the Pink Carnations," was in development for 10 years, but did not reach final production due to limited funding resources and Shearer's death in 1993 due to colon cancer. The Jackie Shearer papers (Additions) consist of personal and professional papers that document her film projects. The personal papers include appointment books and greeting cards. The professional papers primarily consist of research materials and scripts (drafts and final editions) written by Shearer for "Didn't Take Low," which focused on the lives of domestic workers during the Great Depression. The other projects documented in the collection include "A Minor Altercation," "Incident Report," "Sophronia" and a civil rights film. Professional papers also include administrative records that relate to Shearer's company Reel Deal, Inc., principally contracts and subject files. (8/14)