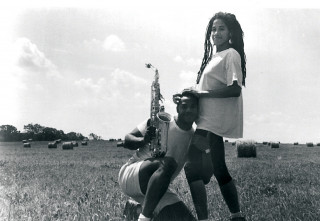 A film by Zeinabu irene Davis

This innovative drama, set in Ohio, traces an African American couple's search for intimacy and friendship. The spirited, African-identified Yasmine Allen is a writer and single mother who has been dating saxophone teacher Craig Watkins for a month. Wishing to end her self-imposed celibacy following her son's birth, Yasmine has reached a turning point in the relationship-but Craig, the Big Lug, wants to take it slow. Sage advice from friends and family members remind them, "sex is a powerful thang." Like her highly acclaimed CYCLES, Davis's film incorporates animation as well as Afro-Haitian dance in a rich exploration of the lives of African Americans.

"Ingeniously pits desire for sexual intimacy against the need for love. A catalyst for in-depth discussions of intimate relationships. Dynamic and entertaining!"

Zeinabu Irene Davis is a director and producer who has received numerous awards for her work with film and video. Born in 1961 in Philadelphia, she received a M.A. in African Studies in 1985 at UCLA, where she also earned her M.F.A. in Film and Television production in 1989. She has received acclaim for her representation of the African American female perspective through a variety of works, which include documentaries, short narratives and experimental films.

Davis directed the film Cycles (1989), an experimental short which earned her an awards from the Black Filmmakers Hall of Fame and the National Black Programming Consortium. Her following works, A Period Piece (1991), A Powerful Thang (1991), Mother of a River (1995) and Compensation (1999) continued to garner her awards from numerous organizations and festivals, including the Gordan Parks Award for Best Director from the Independent Feature Project. Her latest project, Spirits of Rebellion (2011), is a documentary work-in-progress which gathers fellow L.A. Rebellion filmmakers and explores topics in African American film.

Davis has been awarded grants and fellowships from the Rockefeller Foundation, the American Film Institute and the National Endowment for the Arts for her film work. After holding teaching positions at Antioch College and Northwestern University, Davis moved to teach at UC San Diego, where she currently serves as Professor of Communications. (03/19)

COMPENSATION the first feature by award-winning filmmaker Zeinabu irene Davis (CYCLES and A POWERFUL THANG), presents two unique African-American love stories between a deaf woman and a hearing man. Inspired by a poem written by Paul Laurence Dunbar, this moving narrative shares their struggle to overcome racism, disability and discrimination. An important film on African-American deaf culture, Davis innovatively incorporates silent film techniques (such as title cards and vintage photos) to make the piece accessible to hearing and deaf viewers alike, and to share the vast possibilities of language and communication.
Learn more

Rasheeda Allen is waiting for her period, a state of anticipation familiar to all women. Drawing on Caribbean folklore, this exuberant experimental drama uses animation and live action to discover a film language unique to African American women. The multilayered soundtrack combines a chorus of women's voices with the music of Africa and the diaspora-including Miriam Makeba, acappella singers from Haiti and trumpetiste Clora Bryant. The 1991, 4-minute short film A PERIOD PIECE is also available for purchase. Please contact [email protected] for ordering information.
Learn more

Mother of the River

In this poignant story set in the 1850s, a young slave girl befriends a magical woman in the woods called Mother of the River. Through their friendship the young girl learns about independence, honor, humility and respect for others. MOTHER OF THE RIVER is a rare portrayal of slavery from a young woman's perspective. MOTHER OF THE RIVER was funded by the Independent Television Service (ITVS) with funds provided by the Corporation for Public Broadcasting. "Academics will find the film especially useful in courses such as Women's Studies, African American Studies and History." -Jacqueline Bobo, Film and Television Studies, University of NC, Chapel Hill
Learn more
Shopping Cart