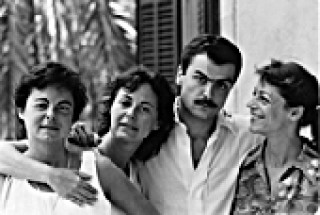 A film by Jennifer Fox

BEIRUT: THE LAST HOME MOVIE is an imaginative film which challenges documentary form and concepts of reality by exposing a personal response to a global event—three months in the life of a Lebanese family living in a heavily-bombed Beirut neighborhood. This extraordinary film captures the real-life experiences of a family living in one of the most chaotic wars in history and provides insight into the psychology of war, 20th century-style. It also reveals the power of cinema verité at its best: a seemingly simple recording of everyday life becomes a fascinating, complex and many-layered look at the connections between personal and political lives.

“A documentary with the expansiveness and complexity of great fiction….It takes great guts to attempt an audacious feat like this one, and something like genius to pull it off.”

Jennifer Fox is an internationally renowned writer, director, and producer. Her groundbreaking films and series include: the Sundance Grand Feature Prize Winner, BEIRUT: THE LAST HOME MOVIE; the ten-hour Gracie Award Winner, AN AMERICAN LOVE STORY; the six-hour IDFA Audience Award Winner, FLYING CONFESSIONS OF A FREE WOMAN, and the Emmy nominated feature, MY REINCARNATION. Fox recently completed THE TALE, which premiered at the 2018 Sundance Film Festival and launched on HBO Films in the U.S. and around the world to audience and critical acclaim. THE TALE has been invited to festivals around the world, including Tribeca Film Festival, Sundance Film Festival London, Oslo Film Festival, Munich Film Festival, Zurich Film Festival, Durban Film Festival and many more into 2019. The film has been accompanied by an extensive global outreach and impact campaign country by country, including being shown at the United Nations in both Geneva, Switzerland and New York. It was nominated for the Emmy Awards, the Gotham Awards, the Gotham Awards, the UK National Film & TV Awards, the Satellite Press Awards, as well as the Golden Globe Award nomination for Best Actress. Fox has executive produced numerous acclaimed films including LOVE & DIANE, ON THE ROPES, THE PATHOLOGICAL OPTIMIST, THE REST I MAKE UP and Associate Produced SHE'S LOST CONTROL. She lectures internationally and her films and series have been shown in retrospectives around the world. (07/19)

A visually striking meditation on loss and a perceptive political critique, this deeply personal work has two subjects: filmmaker Olga Naccache’s ailing mother and the chaotic country where Naccache was raised. Both fell sick in 1975, the onset of incurable depression for one and a bloody civil war ushering in deep divisions for the other. In this sequel to LEBANON: BITS AND PIECES (1994), Naccache ponders the plight of the country she clearly loves while honoring the mother dear to her. Her montage draws on conversations with Naccache's mother toward the end of life, along with footage of this beautiful, accomplished woman and ardent secularist in more physically robust times. Stunning scenes of tranquil Beirut and southern Lebanon contrast with close-ups of a nation under siege from within and abroad. Recent interviews with two longtime friends—a leftist teacher of philosophy in a Christian village school and a Shiite Muslim viewing Hezbollah as Lebanon’s only hope—raise crucial questions about the nation’s identity and precarious future.
Learn more
Shopping Cart