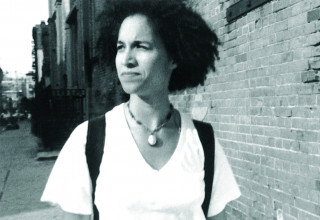 Beyond Black and White

A film by Nisma Zaman

BEYOND BLACK AND WHITE is a personal exploration of the filmmaker’s bicultural heritage (Caucasian and Asian/Begali) in which she relates her experiences to those of five other women from various biracial backgrounds. In lively interviews and group discussions these women reveal how they have been influenced by images of women in American media, how racism has affected them, and how their families and environments have shaped their racial identities. Their experiences are placed within the context of history, including miscegenation laws and governmental racial classifications. BEYOND BLACK AND WHITE is a remarkable celebration of diversity in American society.

“Mandatory viewing for anyone interested in issues of hybrid identities, racialized gender, and the politics of location. Perfect for a wide range of classes: sociology, politics, ethnic studies, women’s studies.”

After graduating from Ithaca College in 1992, with a degree in film, photography and visual arts, producer Nisma Zaman began work at the New York Center for Visual History. During her time at the non-profit arts and culture documentary organization, she was involved in a variety of productions, including the PBS series American Cinema. Zaman went on to work for various renowned filmmakers like Jennifer Fox, Tina DiFeliciantonio, and Jane Wagner: she worked with Fox on the feature documentary AMERICAN LOVE STORY, which profiled an American, interracial family, and with DiFeliciantonio and Wagner on WALK THIS WAY, an in-depth look at nine children’s experiences with race and diversity. Zaman’s next significant role was as line producer on Nickelodeon’s animated series Little Bill, based on the children’s books written by Bill Cosby. Little Bill even earned Zaman a Daytime Emmy in 2004 for Outstanding Children’s Animated Program. Most recently, Zaman served as a producer on the feature-length documentary PEACE BY PEACE: WOMEN ON THE FRONTLINES. The award-winning documentary premiered at the United Nations in October 2003 and was broadcast on PBS the following summer. One of Zaman’s own documentaries is BEYOND BLACK & WHITE, a 16mm film that explores the complex identity issues of five mixed-race women. Zaman was the Dean’s Award recipient for the School of Communications in her centennial class and in March 2004, she was invited by her alma mater to serve as an artist-in-residence. (10/09)