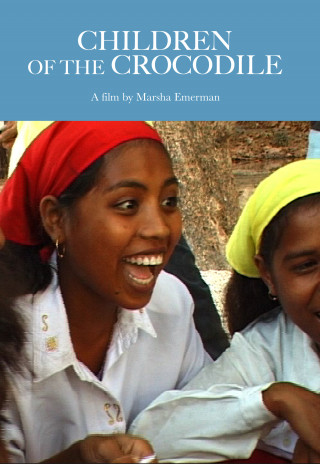 Children of the Crocodile

A film by Marsha Emerman

This documentary tells the story of two young Timorese-Australian activists – one a high profile human rights worker, the other a performance artist and lesbian – and their personal journey to further the cause of peace in the homeland they were forced to flee. Although merely infants when their families left East Timor to seek political asylum in Australia, Cidalia Pires and Elizabeth Exposto carry on their parents’ human rights work promoting the Timorese struggle. Their tireless activist efforts are documented through two amazing years in East Timor’s history - from the joy of voting for freedom in August 1999 to the rage at the destruction that followed and time of renewed commitment and hope. Their country’s independence fulfills their lifetime dream, but it also brings hard choices and painful returns for them both. Cidalia, in particular, faces the additional challenge of being an openly gay Timorese woman in a culture heavily steeped in tradition and conservative gender roles. CHILDREN OF THE CROCODILE tells a story which is personal yet universal - about ideals, identity, and the strength of an exile community that is committed to furthering the cause of peace in their native land.

“A touching and poignant account…told through the lived experience of East Timor’s struggle for independence. An excellent ethnographic film…highly recommended for a variety of social science courses: cultural anthropology courses focusing on refugee and immigrant issues, gender, and politics; courses in women’s studies, and history and area courses on Southeast Asia.”

"[an] evocative journey...This is a genuine, courageous, warm tale worth seeing."

"... a fascinating documentary ...a moving insight into the lives of two passionate young women and a reminder that behind every grand historical moment there is a multitude of individual stories just waiting to be told."

“… tells the dramatic but little known story of the East Timorese independence struggle from the perspective of young people of the diaspora... Highly recommended for its attention to the role of generation, gender, and sexuality in the construction of both nationalist and diasporic identities.”

Marsha is a documentary producer, director, writer and researcher with over twenty-five years' experience. Her film CHILDREN OF THE CROCODILE, a personal history of East Timor, was broadcast nationally in Australia on SBS TV, screened in cinemas, and showed in festivals around the world. It won Best Documentary at Toronto's Inside Out Film Festival, Award of Excellence at Through Her Eyes Film Festival, and was included in a major exhibition at the Australian National Maritime Museum. Other credits include Lihok Pilipina, about women in the Philippines and Intersections, about new migrants to Australia.

In the USA, Marsha gained an MA in Cinema Studies from San Francisco State University and worked on such classic films as"Dark Circle", "The Day After Trinity" and "The Fall of the I-Hotel". Since migrating to Australia in 1989, she has been a lecturer in the documentary MA program at the VCA School of Film & TV. Her 'Women and Documentary Film' class, and expert knowledge of women's contribution to documentary, have led to visiting lectureships at the University of Oregon and Portland State University. (10/17)