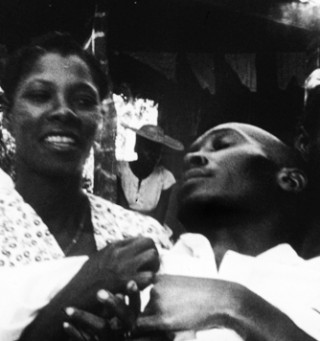 A film by Maya Deren

A journey into the fascinating world of the Voudoun religion edited from footage shot by Deren in Haiti.

"Maya Deren was a brilliant filmmaker and theorist whose substantial body of films and writings has paled beside the even larger legend of her life and death. At the center of the legend is the film, never finished in her lifetime, that she made in Haiti between 1947 and 1951, of the voodoo dances and ritual ceremonies into which she became initiated."

Born in Kiev in 1917, Maya Deren emigrated to the United States with her parents a few years later, grew up mainly in Syracuse, New York, and attended Syracuse University. A social activist from her teens, she became interested first in dance and subsequently in filmmaking. Throughout the 1950s, until her premature death in 1961 at the age of 44, Maya Deren was a leading exponent of experimental cinema and considered one of its most influential artists. She first traveled to Haiti to film dances in 1947, and returned in following years for lengthy stays. The work in Haiti led to the classic ethnographic study, Divine Horsemen, written with the encouragement of Joseph Campbell, as well as audio recordings and a documentary film which was later edited by Teiji and Cherel Ito. A two-hour documentary on Maya Deren and her work was produced for BBC television in 1987. (10/07)