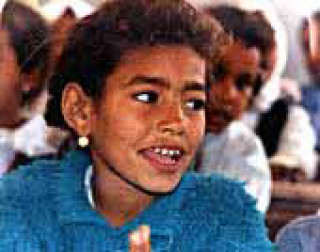 In this engrossing new documentary, award-winning filmmaker Ateyyat El Abnoudy realistically portrays the challenges facing girls in a country where one in four marries before age sixteen and one in five ever attends school. While girls both in and out of school share ambitions ranging from becoming a doctor to attaining basic reading skills, parents express mixed feelings about education's relevance. An affecting view of how Egyptian women still struggle for such basic human rights as education and the avoidance of compulsory marriage, GIRLS STILL DREAM highlights the cultural clash between traditional values and young women's growing self-awareness in the developing world.

Award-winning Egyptian documentarist Attyat El Abnoudy was one of the few film-makers in the Arab world whose work has been consistently acclaimed in the West. She is widely regarded as the finest exponent of documentary cinema in Egypt.

Her work concentrated upon social issues revolving around the Egyptian, Arab and African underclasses, especially upon the lot of women, a choice of subject matter which has limited her popular appeal and frequently invited the displeasure of Arab governments. However, her artistry was universally applauded.
Trained as a lawyer, Ms. Abnoudy studied film-making at the Egyptian Film Institute and later at the International Film and Television School in England. Her first film, Horse of Mud (1971) won three international prizes, Grand Prix and FIPRCI at Grenoble Film Festival, Grand Prix at the Manheim Film Festival and Grand Prix at the Damascus Film Festival. Her next film Sad Song of Touha (1972) won the French Critics Prize at the Grenoble Film Festival. The 22 films she made between 1971 and 1996 have won over 30 international awards.

Her film Permissible Dreams (1983), an Egyptian-German co-production, was broadcast on Berlin Television, Channel 4 (UK), Greek Television, and throughout the Scandinavian countries as well as in the Arab world. Rhythm of Life (1988), a German-British co-production, was broadcast on Channel 4 (UK) and ZDS, the German 2nd Channel.

Her most recent films are Rawya (1995), a profile of a peasant woman artist, Girls Still Dream (1995), a study of the problems of Egyptian teenage girls, and Democracy Days (1996), tracing the role of women in the 1995 Egyptian parliamentary elections.