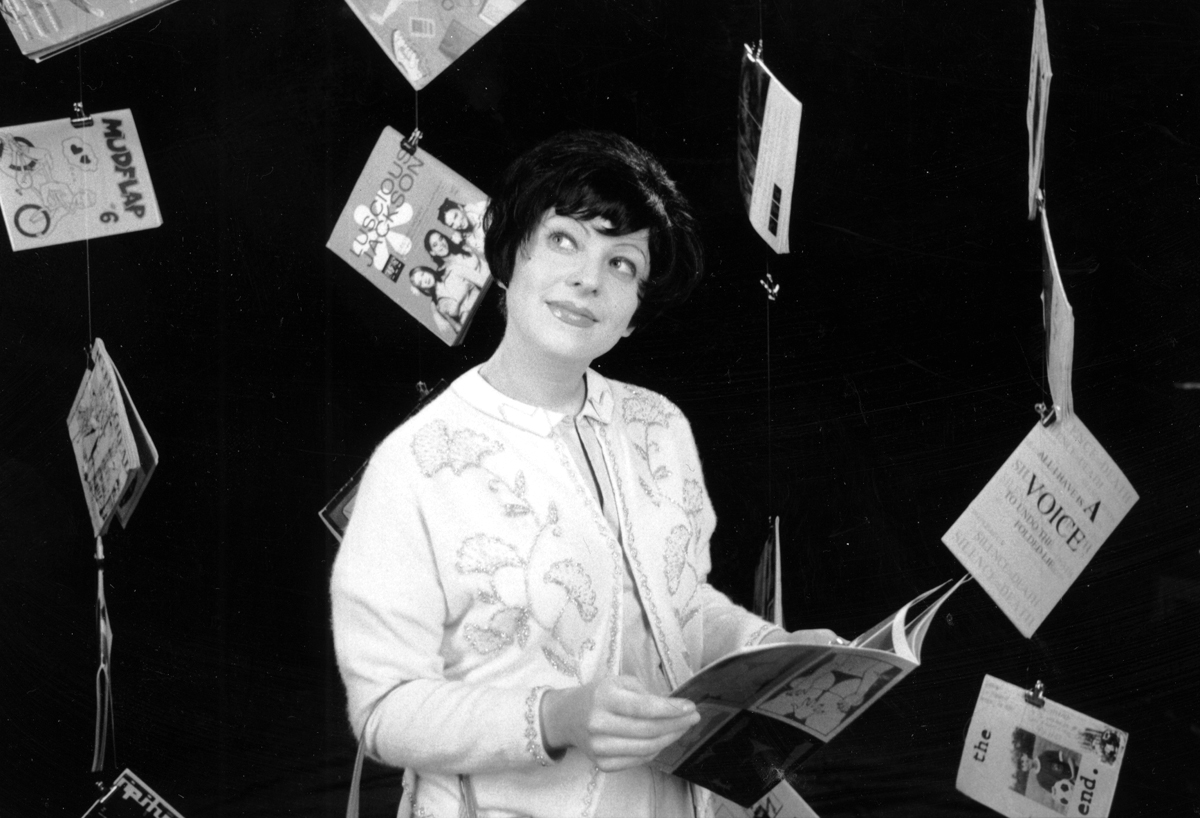 A film by Kara Herold

An 18 minute explosion of fringe feminism and print media, The GRRLYSHOW is a powerful and rebellious message from new voices often left unheard. Filmmaker Kara Herold examines the girly Zine revolution and culture in such a way that the film intellectually and stylistically addresses anyone's question concerning whether or not feminism has reached it's 3rd wave: the postmodern. By interweaving head-shot interviews, clips from the zines and 1950's television-esque vignettes, Herold clearly illustrates feminism's ability to exist subversively within a system that generally doesn't give women their own voice . The GRRLYSHOW successfully brings to the surface alternative voices and projects that are vital to the continuation and expansion of feminism. An excellent film for mass communication, women's studies and pop culture courses.

"A perky peek at the alternative media community where self-publishing gals are doin' it for themselves. Aware, irreverent, entertaining, even brilliant, these zine creators relish the irony that to speak in one's unique unfettered voice is to touch others more powerfully than with the traditional blanded-down mainstream mag approach. Viva the grrly zines!" Al Hoff, Pittsburgh City Paper & Creator, Thrift Score zine

"Gleefully explores the culture of zines and their role in shaping female identity in the twenty-first century."

"A timely spirited look at a new generation of diverse young women taking control of a corner of the media pie by self publishing their own magazines. Inspired by the zines themselves, Kara's film is irreverent, analytical and fun.”

“'Grrlyshow' is an intelligent, honest and rare look at the women behind the alternative girl pop culture scene. It will surely stimulate discussion among diverse audiences -- especially among women and teenage girls -- and leave one inspired and empowered to challenge and re-examine one's relationship to the status quo."

"A lively, witty concoction of cornball footage, ironic reenactments and insider interviews that captures the wicked humor and lively diversity of the girl zine world."

Kara Herold's films employ wit, provocative storytelling, and dynamic visual assemblages to comment upon the uneasy intersections between the real life challenges contemporary women face and hidebound cultural expectations and institutions that may limit their life choices. She has written, directed, and produced films ranging from short animations to award-winning documentaries. Grrlyshow, about the girl zine explosion in the 90s, premiered at Sundance in 2001 and is distributed by Women Make Movies. Bachelorette, 34, a humorous take on society's obsession with marriage viewed through a mother-daughter relationship, premiered at the International Documentary Festival and played at the Documentary Fortnight at MoMA in 2009. Bachelorette, 34 is distributed by New Day Films.

Her awards and grants include support from the San Francisco Arts Commission, Pacific Pioneer Fund, and Film Arts Foundation. She is currently in post-production on 39½, for which she received a New York State Council for the Arts Grant.

Kara Herold received an MFA in Cinema from San Francisco State University. She worked at Yerba Buena Center for the Arts for twenty years and was a stagehand for the International Alliance of Theatrical Stage Employees, Moving Picture Technicians, Artists and Allied Crafts of the United States. She is currently an Assistant Professor in the Department of Transmedia at Syracuse University. (07/19)

Lebanese poet and writer Joumana Haddad has stirred controversy in the Middle East for having founded Jasad (the Body), an erotic quarterly Arabic-language magazine. Dedicated to the body’s art, science and literature, Jasad is one of the first of its kind in the Arab world and has caused a big debate in the Arabic region not only for its explicit images, erotic articles and essays on sex in Arabic but also for the fact that an Arab woman is behind it all. Despite Beirut’s external appearance of freedom portrayed through its infamous nightlife and women’s stylish and open revealing fashion sense, this is all still taboo. JASAD & THE QUEEN OF CONTRADICTIONS, by Lebanese director Amanda Homsi-Ottosson, tackles the subject of sexuality in Lebanon, giving insight on the rare use of the Arabic language to discuss sex and erotica. Different views regarding the magazine and sexuality are also given by the head of a women’s rights organization, a sexual health educator and a doctor who performs hymen reconstruction surgeries. Despite the debates, the threats and the lack of funds, one passionate woman shows no sign of slowing down her small steps towards a “sexual revolution” in the Arab world.
Learn more
Shopping Cart