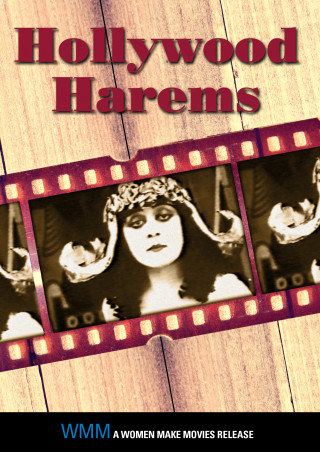 A film by Tania Kamal-Eldin

"Tania Kamal-Eldin has once again produced a stunning video, a half-hour documentary, this time taking critical aim at Hollywood's abiding fascination with and fantasies about all things east. Juxtaposing film clips from the 20s through the 60s, 70s, and 80s, Kamal-Eldin explores the organization of gender, race, and sexuality in Hollywood's portrayal of the exotic east an indiscriminate fusion of things Arab, Persian, Chinese and Indian. She argues, convincingly, that in abridging cultural plurality and difference, these technicolor fantasies have worked both to shape and reinforce often derogative assumptions about peoples of the east while at the same time reinscribing the moral, spiritual, and cultural supremacy of the Anglo-European west. HOLLYWOOD HAREMS is skillfully crafted, well-paced technically adept production versatile and especially suitable for use in a variety of classroom settings."
Dr Valerie Hartouni, Director, Critical Gender Studies Program, University of California at San Diego

"'Hollywood Harems' is a video demanding that it be viewed twice: once for sheer chuckles and enjoyment, but again to trace the carefully developed themes of Orientalist portrayal of women in Hollywood's past feature films."

"Effectively cuts through to the heart of the matter--the pernicious objectification of women by race and gender. Useful in courses on women and ethnic studies as well as national and world cinema."

Tania Kamal-Eldin is an independent filmmaker and educator. Her documentary productions focus on women and Middle Eastern issues with an emphasis on the complex interactions of gender, race and cross-cultural representation. Kamal-Eldin has an MFA in Visual Arts from University of California-San Diego where she was awarded the Jacob Javits Fellowship, as well as a MSC in Political Economy from the London School of Economics. She has taught at the University of California, San Diego, and Palomar College. She has published much fiction including co-authoring a book of short stories. Currently she is an Assistant Professor at American University, School of Communication in Film and Media Arts, in Washington D.C. (8/14)

Covered: The Hejab in Cairo, Egypt

Just over a decade ago it was hard to find women on the streets of Cairo who veiled, a custom that their forebearers struggled to overthrow at the beginning of the twentieth century. But today, many Muslim women in Egypt wear a head scarf called the hejab, and in more extreme cases they cover their entire faces. This absorbing documentary offers a rare opportunity to examine the restoration of veiling and the reasons for its pervasiveness through the eyes of Egyptian women. In unique interviews with women of different ages and backgrounds, COVERED reveals that Islamic tradition, religious fundamentalism, and growing nationalism are not solely responsible for decisions to wear the hejab. Diverse social, economic and political factors, as well as personal preferences, often play prominent roles. As timely as it is compelling, the film shows how complex causes account for a phenomenon that is poorly understood outside the Muslim world.
Learn more

Lebanese poet and writer Joumana Haddad has stirred controversy in the Middle East for having founded Jasad (the Body), an erotic quarterly Arabic-language magazine. Dedicated to the body’s art, science and literature, Jasad is one of the first of its kind in the Arab world and has caused a big debate in the Arabic region not only for its explicit images, erotic articles and essays on sex in Arabic but also for the fact that an Arab woman is behind it all. Despite Beirut’s external appearance of freedom portrayed through its infamous nightlife and women’s stylish and open revealing fashion sense, this is all still taboo. JASAD & THE QUEEN OF CONTRADICTIONS, by Lebanese director Amanda Homsi-Ottosson, tackles the subject of sexuality in Lebanon, giving insight on the rare use of the Arabic language to discuss sex and erotica. Different views regarding the magazine and sexuality are also given by the head of a women’s rights organization, a sexual health educator and a doctor who performs hymen reconstruction surgeries. Despite the debates, the threats and the lack of funds, one passionate woman shows no sign of slowing down her small steps towards a “sexual revolution” in the Arab world.
Learn more

SLAYING THE DRAGON is a comprehensive look at media stereotypes of Asian and Asian American women since the silent era. From the racist use of white actors to portray Asians in early Hollywood films, through the success of Anna May Wong’s sinister dragon lady, to Suzie Wong and the ’50s geisha girls, to the Asian-American anchorwoman of today, this fascinating film shows how stereotypes of exoticism and docility have affected the perception of Asian-American women. Produced by Asian Women United, this invaluable resource has been widely used by universities and libraries. SLAYING THE DRAGON: RELOADED is a 30-minute sequel to SLAYING THE DRAGON. RELOADED looks at the past 25 years of representation of Asian and Asian American women in U.S. visual media — from blockbuster films and network television to Asian American cinema and YouTube — to explore what’s changed, what’s been recycled, and what we can hope for in the future.
Learn more
Shopping Cart