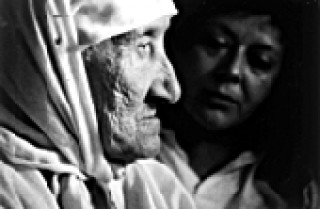 In My Father's House

A film by Fatima Jebli Ouazzani

In this beautiful, poetic and deeply personal film, Moroccan filmmaker Fatima Jebli Ouazzani investigates the status accorded women in Islamic marriage customs and the continuing importance of virginity. Ouazzani left her father’s house in Morocco sixteen years ago to escape the constraints her culture and its traditions have put on women. She returns now to confront those traditions, her own family and herself. Following three generations of women — her grandmother and mothers’ arranged marriages, her grandmother’s subsequent attempts to divorce, and Naima, a young woman who has returned home for a traditional wedding ceremony—she questions whether her choice for a life of her own was worth the loss of her father. Jebli Ouazzani offers us a rare glimpse of the shifts and changes in Moroccan and Islamic culture in this powerful, moving film.

“…a courageous and deeply personal reflection”

Filmmaker Fatima Jebli Ouazzani was born in Morocco in 1959 but moved with her family to Holland in 1970. At the age of 18 she left home, fleeing the oppressive ideals of her father and escaping the likelihood of the same kind of oppressive marriage that her mother and grandmother had entered into a young age. Ouazzani briefly studied psychology before attending the Dutch Film School in Amsterdam, where she received a degree in directing and scriptwriting in 1992. IN MY FATHER’S HOUSE (1997) is Ouazzani’s first film; an expansion of her previous dramatic and documentary shorts and a deeply personal reflection on her own family history and her coming of age within the constraints of Moroccan society. The film debuted at the 1998 San Francisco Film Festival. Ouazzani currently lives in Amsterdam and is a freelance journalist for Dutch radio and television. (10/09)

QUEST FOR HONOR, which premiered at Sundance and was shortlisted for an Academy® Award, investigates the still prevalent practice of honor killing in the Kurdistan region of northern Iraq.
Learn more
Shopping Cart