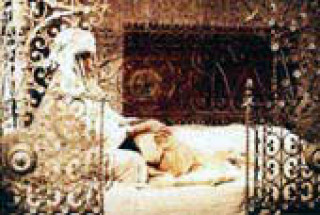 A film by Assia Djebar

Not recommended for exhibition. This is the only existent digital copy from the original film, which was produced by the late filmmaker. If you have questions about the quality, please email [email protected].

Finally available in the United States, this classic film from acclaimed novelist and filmmaker Assia Djebar is essential viewing for an understanding of women in Algeria. Taking its title and structure from the “Nouba," a traditional song of five movements, this haunting film mingles narrative and documentary styles to document the creation of women’s personal and cultural histories.

Returning to her native region 15 years after the end of the Algerian war, Lila is obsessed by memories of the war for independence that defined her childhood. In dialogue with other Algerian women, she reflects on the differences between her life and theirs. In lyrical footage she contemplates the power of grandmothers who pass down traditions of anti-colonial resistance to their heirs. Reading the history of her country as written in the stories of women’s lives, Assia Djebar’s LA NOUBA DES FEMMES DU MONT-CHENOUA is an engrossing portrait of speech and silence, memory and creation, and a tradition where the past and present coexist.

Widely hailed as one of the most important figures in francophone Maghrebian literature, Djebar is the author of more than a dozen books, including A SISTER TO SCHEHEREZADE and WOMEN OF ALGIERS IN THEIR APARTMENT. She is currently Professor and Director of the Center for French and Francophone Studies at the Louisiana State University.

“La Nouba is a film of rare intelligence.”

“Assia Djebar always listens as much as she watches and records, from the special, not to say privileged perspective of a cross-cultural and cross-disciplinary woman. Her vision is therefore unique.”

“When she films La Nouba, Djebar views her appropriation of the camera as a challenge to colonial and patriarchal domination, an important political and symbolic event in the liberation and empowerment of Algerian women.”

Algerian-born, Moslem raised, Paris-educated, Assia Djebar (1936- 2015) tackled all genres: poetry, plays, short-stories, novels and essays. In her books Djebar explored the struggle for social emancipation and the Muslim woman's world in its complexities. Several of her works deal with the impact of the war on women's mind. She wrote, directed, and edited her own films, winning the Biennale prize at the 1979 Venice Film Festival with her very first attempt, La Nouba des Femmes du Mont Chenoua (The nouba or "ritual" festival of the Women of Mt. Chenoua). She staged her own plays and both translated and directed the plays of others (Amiri Baraka’s, for example). In 2000, she authored an operatic libretto, "Filles d’Ismaël dans le vent et la tempête" (Daughters of Ishmael, through wind and storm). Based on her 1991 narrative on the life of the Prophet, Far from Medina, this oratorio was performed to excellent reviews in Rome and at the Palermo Arts Festival. A second version, in classical Arabic this time, is commissioned for future performance in Holland. Djebar is one of North Africa's most famous and influential writers, and was elected to the Académie française on June 16, 2005, the first writer from the Maghreb to achieve such recognition.