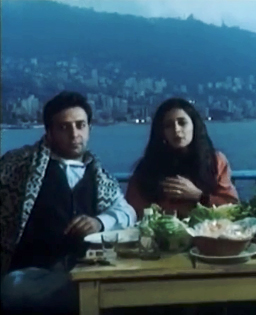 A film by Olga Naccache

LEBANON: BITS AND PIECES is an exquisitely beautiful and profoundly moving exploration of the myths and realities of present-day Lebanon, as reflected through the voices of women. During Olga Naccache's childhood, Lebanon was known to the outside world as an exemplary model of peace in the heart of an Arab Middle East dominated by dictators. Following a seven year absence, Naccache returned to Lebanon with a camera to record the dreams, disappointments and worries of women of her own generation and to meet a younger generation of women whose only memory is that of war. Through these voices, Naccache’s own voyage of rediscovery is revealed — rediscovery of her country and of herself.

“A personal and poignant mosaic of vignettes; one outstanding scene epitomizes the unique multi-culturalism of Lebanon.”

Olga Naccache was born in Mersin, Turkey to a Lebanese father and a Syrian mother. Naccache was raised in Beirut, where the family relocated in 1956. After studying Arabic literature and journalism, she worked as an Assistant Director for various television stations during the Lebanese war. She started directing and producing her own films, including Lebanon: Bits and Pieces, Turkish Woman Unveiled, Tazi Istambooul, Mother Lebanon and Me, in 1994. Souriya, The Challenge is her latest film on the war on Syria. (2016)

A visually striking meditation on loss and a perceptive political critique, this deeply personal work has two subjects: filmmaker Olga Naccache’s ailing mother and the chaotic country where Naccache was raised. Both fell sick in 1975, the onset of incurable depression for one and a bloody civil war ushering in deep divisions for the other. In this sequel to LEBANON: BITS AND PIECES (1994), Naccache ponders the plight of the country she clearly loves while honoring the mother dear to her. Her montage draws on conversations with Naccache's mother toward the end of life, along with footage of this beautiful, accomplished woman and ardent secularist in more physically robust times. Stunning scenes of tranquil Beirut and southern Lebanon contrast with close-ups of a nation under siege from within and abroad. Recent interviews with two longtime friends—a leftist teacher of philosophy in a Christian village school and a Shiite Muslim viewing Hezbollah as Lebanon’s only hope—raise crucial questions about the nation’s identity and precarious future.
Learn more

Lebanese poet and writer Joumana Haddad has stirred controversy in the Middle East for having founded Jasad (the Body), an erotic quarterly Arabic-language magazine. Dedicated to the body’s art, science and literature, Jasad is one of the first of its kind in the Arab world and has caused a big debate in the Arabic region not only for its explicit images, erotic articles and essays on sex in Arabic but also for the fact that an Arab woman is behind it all. Despite Beirut’s external appearance of freedom portrayed through its infamous nightlife and women’s stylish and open revealing fashion sense, this is all still taboo. JASAD & THE QUEEN OF CONTRADICTIONS, by Lebanese director Amanda Homsi-Ottosson, tackles the subject of sexuality in Lebanon, giving insight on the rare use of the Arabic language to discuss sex and erotica. Different views regarding the magazine and sexuality are also given by the head of a women’s rights organization, a sexual health educator and a doctor who performs hymen reconstruction surgeries. Despite the debates, the threats and the lack of funds, one passionate woman shows no sign of slowing down her small steps towards a “sexual revolution” in the Arab world.
Learn more
Shopping Cart