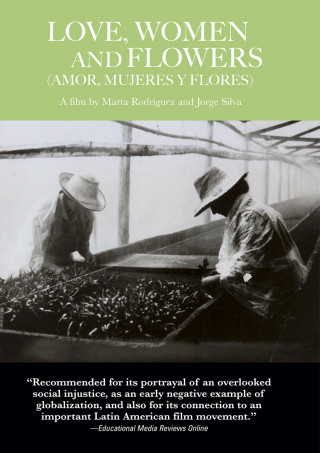 A film by Marta Rodriguez and Jorge Silva

At any time of year in the U.S., carnations of every color are plentiful and cheap – but the ready availability of these beautiful flowers comes at a global price. Thousands of miles away from the bright displays in U.S. stores, hazardous labor conditions endanger the 90,000 women who work in Colombia’s flower industry.

According to a 2007 report, approximately 60 percent of all flowers sold in the U.S. come from Colombia, where the use of pesticides and fungicides – some banned in the developed countries that export them – has drastic health and environmental consequences. With urgency and intimacy, this film evokes the testimonies of the women workers and documents their efforts to organize. As women workers continue to struggle in this industry (in 2007 almost 200 workers were fired from the largest flower plantation in Colombia for their attempts to unionize and improve their conditions) this powerful and unique documentary remains an important resource for those interested in globalization, environmentalism, labor issues, social struggles, and Latin American studies.

“It’s been a long time since I’ve seen a documentary which has affected me so greatly. I was impressed by the directors’ sensitivity to their subject and deeply moved by the testimonies of the people interviewed. Such a balance of true craft and spirit is rare.”

“Recommended for its portrayal of an overlooked social injustice, as an early negative example of globalization, and also for its connection to an important Latin American film movement.”

Marta Rodríguez (born 1933) has never been merely an anthropologist or merely a documentary filmmaker. From her first film Chircales (the Brickmakers), to her present work, Rodríguez has always shown herself to be a politically committed, independent anthropological filmmaker who uses documentary to analyze the living and working conditions and the world view of peasants, native peoples, and workers in her native Colombia

All of Rodríguez' documentaries have been made in collaboration with her spouse, Jorge Silva, who was best known as a cinematographer, a career he began after having worked as a still photographer. He died in 1987 after twenty years of distinguished work as a committed documentary filmmaker.

A brief descriptive Rodríguez-Silva filmography follows. Chircales examines the hellish life of a family of poorly paid, non-unionized brickmakers on the outskirts of Bogota. Planas: Testimonio de un etnocide (Plans: Testimony about Ethnocide, 1970) is an example of denunciatory cinema. The film documents the genocide of an indigenous group and explores the economic and social causes of the slaughter. In Campesinos (Peasants, 1974-76), the filmmakers analyze the violence and exploitation long visited on Colombia's rural population. Nuestra Voz de Tierra, Memoria y Futuro (Our Voice of Land, Memory, and Future, 1973-80) uses fictional elements to explore the magic, myths, and legends of the Indian worldview. Amor, Mujeres y Flores (Love, Women and Flowers1984-89) exposes the dangerous conditions for women workers in Colombia's booming cut-flower trade. Nacer de Nuevo (To Be Born, 1986-87) offers a moving portrait of two indigent seventy-year olds who must somehow get on with their lives after having lost everything in the landslides and floods triggered by the eruption of the Ruiz Volcano in 1985. (8/14)

Jorge Silva was born December 2, 1941, in Giradot, Tolima, Colombia. At the age of 6 he migrated with his single mother, Ana Silva, and his sister to the capital, Bogota. Ana worked as a maid in the La Candelaria quarter. This is where Jorge was renamed Joseph because Jorge was the name of the child of their employers. Jorge was placed in an orphanage due to the difficult work situation of his mother. After Jorge left the orphanage he was unable to finish high school, and worked in construction to help his family and embarked on self-study at the Luis Angel Arango Public Library. He became interested in cinema around 1964 through the influence of the cine-club movement, and latter made his first film, Paper Days, along with his friend Enrrique Forero.

In 1965, Jorge met Martha Rodriguez, who had recently returned from France, where she had studied filmmaking and anthropology. They decided to work together on a documentary film on child exploitation in the "Chircales" artisan brick factories) in the neighborhood of Tunjuelito, south of Bogota. As a photographer, he always paid special attention to the treatment of the image in this documentary. During this period, Jorge was studying with the photographer Hernando Oliveiros, where Jorge had the opportunity to deepen his knowledge of the craft. "Chircales" soon became a classic of the New Latin American Cinema. Its International recognition allowed Martha and Jorge to continue their documentary work.

His documentaries focus on subjects such as the agrarian movement; indigenous lands reclamations, massacres of indigenous communities and peasants, as well as the environmental problems inside the Colombian flower industry. In addition, he left an extensive photographic archive concerning the Colombian political situation in Colombia during his time, urban and rural social movements, architecture, artists, family and friends. Jorge left unfinished projects in collaboration with the writer Arturo Alape. Together they worked on the scripts for three fiction movies about the history of the political violence in Colombia.