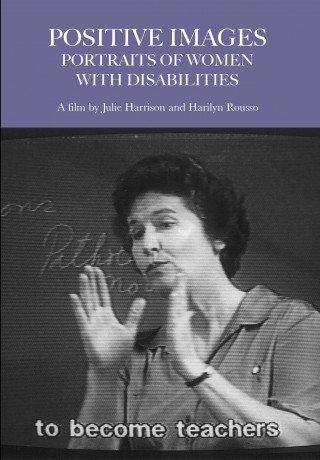 Portraits of Women with Disabilities

A film by Julie Harrison and Harilyn Rousso

People with disabilities constitute nearly twenty percent of the American population. Sexism and often racism compound discrimination based on disability. Designed to provide positive, realistic pictures of the lives of women with disabilities and the social, economic, and political issues they face, POSITIVE IMAGES focuses on three strong and articulate women. Offering crucial role models for women and girls with disabilities, this powerful film also locates disability as a women's issue of concern to us all by discussing education, employment and careers, sexuality, family life and parenting, and societal attitudes.

"A tremendous resource which integrates issues of disability, gender and sexuality."

"Very well-paced, excellent videography-a glimpse of the lives of three capable and vibrant women who are great role models for others."

Julie Harrison has been a "crossover" artist in New York City for more than thirty years, moving between video, photography, painting, performance, installation, books and digital images. She is the recipient of numerous grants and awards and has exhibited widely. From 2003-2010, Harrison founded and directed the Art & Technology Program at Stevens Institute of Technology in Hoboken, New Jersey, and is currently creative consultant for Granary Books, publisher of artists books and works exploring the intersection of word, image and page.

Julie Harrison's early time-based works in the 1970s traversed through private performances for video to multiple video camera/monitor performances and installations. A single-channel extension of these ideas was developed with image-processed videos, utilizing multiple-source systems in real time, produced over a period of 15 years at the Experimental Television Center. During this time, Harrison recognized the importance of the collaborative process, working with other artists, writers, musicians, dancers, architects, and educators. She was an early member of the artists' group, Collaborative Projects (Colab), participating in seminal theme shows and working in many capacities on the artists' cable TV show, "Potato Wolf." She was co-founder of Machine Language, a video art group, and later, through her own company, Julie Harrison Productions, produced and directed video art, documentaries and art educational videos which have aired on PBS nationwide and were featured in festivals such as the Toronto Film Festival, The World-Wide Video Festival in The Hague; Video Roma in Italy; Video/Culture Canada in Toronto; the National Video Festival in Los Angeles, among others. (8/14)

Harilyn Rousso is a writer, painter, educator, social worker, psychotherapist and activist who has worked in the disability rights field, with a particular emphasis on issues of women and girls with disabilities, for more than twenty-five years. She is the founder of the Networking Project for Disabled Women and Girls of the YWCA/NYC, a unique mentoring program that has been replicated widely, and the President of Disabilities Unlimited Consulting Services, which provides education and training on disability equity issues.

In addition to her memoir, Don’t Call Me Inspirational: A Disabled Feminist Talks Back, Rousso is the author of numerous publications on gender and disability, including Disabled, Female and Proud! and Strong Proud Sisters: Girls and Young Women with Disabilities and is the co-editor of Double Jeopardy, and Addressing Gender Equity in Special Education. She is also the executive producer of the award-winning documentary Positive Images: Portraits of Women with Disabilities, which was shown on PBS.

Impassioned about freedom of sexual expression, Australian sex worker Rachel Wotton specializes in a long overlooked clientele— people with disabilities. Working in New South Wales—where prostitution is legal— Rachel’s philosophy is that human touch and sexual intimacy can be the most therapeutic aspects to our existence. Indeed, she is making a dramatic impact on the lives of her customers, many of whom are confined to wheelchairs or cannot speak or move unaided. Through her graduate studies and her nonprofit group Touching Base, Rachel both fights for the rights of sex workers and promotes awareness and access to sexual expression for the disabled through sex work—and brings together these two often marginalized groups. We follow her from conducting sex and disability workshops to speaking to the World Congress on Sexual Health about her mission to observing her overnight stays with severely disabled clients who blossom under her attention—with one man even gaining back lost movement and sensation thanks to his time spent with her. Rachel has made it her life’s work to end the stigma surrounding these populations; the depth, humor and passion in this positive and pro-active documentary will transform the way we see sex workers and people with disabilities forever.
Learn more

DEFIANT LIVES is a triumphant film that traces the origins of the world-wide disability rights movement.
Learn more

A 28 minute educational version is also available, email [email protected] for details. THE R-WORD is an intimate look at the history of the word ‘retard(ed),’ cultural representation, and the challenges and triumphs of people living with intellectual and developmental disabilities.
Learn more
Shopping Cart