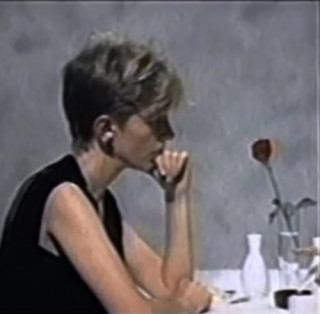 A film by Midi Onodera

Midi Onodera is an award-winning Canadian filmmaker who has been directing, producing and writing films for over twenty years. She has over twenty-five independent short films to her credit as well as a theatrical feature film and several video shorts. Her recent works feature a collage of formats and mediums -ranging from 16mm film to Hi8 video to digital video and “ow end digital toy formats such as a modified Nintendo Game Boy Camera, the Intel Mattel computer microscope, the Tyco and Trendmasters video cameras.

Abandoned by her lover, a young woman finds comfort and safety in her basement apartment. Mundane routines, a diet of junk food and the warmth of the television insulate her from the pain and betrayal of her ill-fated relationship. Eventually, THE BASEMENT GIRL emerges—transformed and ready to "make it on her own". This latest film by Midi Onodera (TEN CENTS A DANCE, SKIN DEEP) breaks new cinematic territory by employing multiple formats from traditional 16mm film to toy cameras including a modified Nintendo Game Boy digital camera and the Intel Mattel computer microscope. "Midi Onodera's latest film is a witty and wonderful meditation on how women translate the images that surround them (from Bionic Woman to That Girl!, from Barbra Streisand to Maya Deren). The film is funny and touching at the same time, as it looks at familiar texts in new contexts. For anyone interested in women and visual culture, this is an absolute must-see." Judith Mayne, Ohio University
Learn more

THE DISPLACED VIEW is a film that movingly depicts the odyssey of an American-born Japanese granddaughter in search of her identity through her grandmother who is the last of the family born in Japan. The sense of isolation the granddaughter feels as a Japanese woman who cannot speak Japanese is skillfully evoked in a montage of images gleaned from old photographs, movies, animated puppets, and various experimental film techniques. Onodera focuses almost exclusively on Japanese women as preservers of the old traditions in a country where they have no meaning. By revealing the inconsistency of memory and the cultural erosion of assimilation, the fragile identity of the Japanese in North America is eloquently expressed, and the sense of alienation and displacement heightens as the old voices try to remember the past. The narrative shifts between English and Japanese, as well as between generations. Japanese subtitles are artfully displayed throughout. The focus on women makes this film ideal for women’s studies, but the historical overview would be important in other disciplines such as history and sociology. Highly recommended for academic libraries. -Roxanna Herrick, SUNY at Stony Brook Library
Learn more