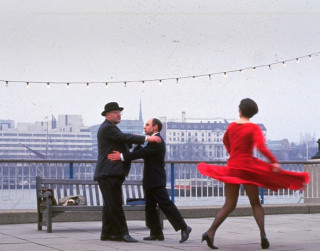 A film by Sally Potter

This lively, accessible spy spoof revolves around the unlikely alliance of three eccentric characters and their mission to uncover government foreign policy duplicity. Beautifully and humorously choreographed against London's most famed locales. In technicolor! Produced in association with the British Film Institute and Channel Four Television.

"Miraculously outrageous. One of a handful of films which successfully mime and deconstruct Hollywood's production values."

Sally Potter made her first 8mm film aged fourteen. She has since written and directed eight feature films, as well as many short films (including THRILLER and PLAY) and a television series, and has directed opera (Carmen for the ENO in 2007) and other live work. Her background is in choreography, music, performance art and experimental film. ORLANDO (1992), Sally Potter’s bold adaptation of Virginia Woolf’s classic novel, first brought her work to a wider audience. It was followed by THE TANGO LESSON (1996), THE MAN WHO CRIED (2000), YES (2004), RAGE (2009) and GINGER & ROSA (2012). Her latest feature, THE PARTY, was released in 2017.

Sally Potter is known for innovative form and risk-taking subject matter and has worked with many of the most notable cinema actors of our time. Sally Potter’s films have won over forty international awards and received both Academy Award and BAFTA nominations. She has had full career retrospectives of her film and video work at the BFI Southbank, London, MoMA, New York, and the Cinematheque, Madrid. She was awarded an OBE in 2012. Her book Naked Cinema - Working with Actors was published by Faber & Faber in March, 2014.

Since Lenin's fervent embrace of cinema in the 1920s, more women have worked in the film industry in Russia than in the West. This fascinating documentary - produced during glasnost and prior to the dissolution of the USSR - includes interviews with actresses, critics, technicians and leading directors Kira Muratova and Lana Gogoberidze. Clips from films such as Larissa Shepitko's WINGS are contrasted with more traditional representations of women in "Soviet" cinema. WOMEN FILMMAKERS IN RUSSIA (aka I AM AN OX, I AM A HORSE, I AM A MAN, I AM A WOMAN) was directed by Sally Potter (ORLANDO). A Triple Vision Production.
Learn more
Shopping Cart