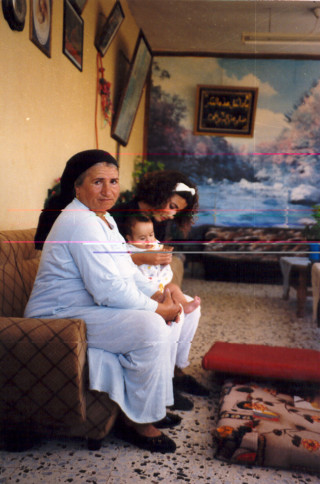 A film by Norma Marcos

THE VEILED HOPE explores the personal and political challenges facing Palestinian women through a series of wonderful portraits of women living on the Gaza and West Bank. The women explain how in their daily lives as doctors, schoolteachers and activists they are working to rebuild Palestinian cultural identity. They also provide a rare insight into the complex feelings women have surrounding the emergence of political Islamic movements. THE VEILED HOPE gives an in-depth analysis of the position of Palestinian women as they juggle women’s and national liberation struggles.

“A useful educational documentary on Palestinian women, The Veiled Hope highlights the links between national and gender struggles.”

Critic, filmmaker and journalist Norma Marcos was born in Palestine and, though she currently lives in Paris, frequently returns to work in Palestine and its territories. During work on one particular project, Marcos had travelled to Palestine to begin production when she was detained by Israeli authorities and jailed in Bethlehem. Never one to let a storytelling opportunity escape her, Marcos used a mini-DV camera to capture her experience during the seven weeks she spent in the Israeli prison waiting for her case to be sorted out. Marcos worked the footage, including interviews with an occasional visitor, her seven-year-old niece Yara, into a short documentary called "En Attendant Ben Gurion (Waiting For Ben Gurion)." The film blends Marcos' own view of Bethlehem during her detainment with a child's perspective on life in the Middle East. "En Attendant Ben Gurion" was screened in competition at the 2007 Rotterdam International Film Festival. (7/12)