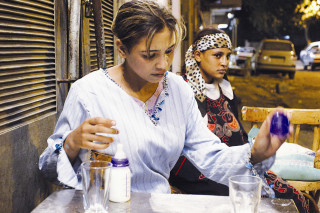 A film by Tahani Rached

Screened to audiences at the Cannes, Toronto, and New York film festivals, this fresh, irresistibly lively, intensely engaging documentary from widely acclaimed Egyptian director Tahani Rached (SORAÏDA, WOMAN OF PALESTINE and FOUR WOMEN OF EGYPT) follows a band of teenage girls living on the streets of Cairo. Rached won astonishing access to the girls’ world; this vigorous, cinematic film is built upon the deep trust of its subjects and the long experience of the filmmaker. Already at a disadvantage as impoverished and abused girls in a Muslim society, they encounter rape, drug addiction, prostitution, pregnancy and motherhood on the streets. While the girls’ troubles are not downplayed, neither are their courage, playfulness and vibrant camaraderie.

Rached brings alive the pulse of Cairo’s streets, offering an unsentimental portrait that avoids traps of guilt or cheap pity. What stands out is the strength and sheer joy that these girls project. With deft skill Rached reveals an invisible world and offers a loving homage to the inspirational, fierce girls who inhabit it.

“Exhilarating… The filmmaker has a remarkable ability to delve into the intimate levels of relationships with her subjects. Highly recommended for discussions on topics of women’s agency, marginality, subjectivity, identity formation, power, and resistance.”

“Inspired…compelling...Jaunty…in keeping with the overpowering child-like energy of the girls themselves.”

“Presents their day-to-day lives with sympathy unadulterated by analysis or First World pity.”

“Follows the lives of these young women without sentimentalizing or sensationalizing their plight, but depicts the severity of their tragedy by allowing audiences to observe their lives at face value.”

“A brief but haunting window into a tragic world, the film captures the young women in all their persevering strength and marginalized wretchedness.”

“3 ½ Stars. Highly Recommended. Remarkable… Rached’s unusual access to the girls’ world pays off brilliantly in this intimate and often heartbreaking expose of a side of Egyptian society unseen in the west.”

Born in Egypt, Tahani Rached settled in Quebec in 1966. After attending Montreal's École des Beaux-Arts, she was involved in community action until she made her first film, Pour Faire Changement (1972), a documentary produced by Le Vidéographe, which set the tone for all her future work. In 1979, her first feature film, Les Voleurs de Jobs, revealed her distinctive view of the world. A documentary on immigration, it demonstrated her ability to capture reality. This was followed by a series of six half-hour documentaries for Radio-Quebec on Quebec's Arab community.

As a NFB staff filmmaker from 1980 to 2004, she tackled sensitive topics: war in Beirut! Not Enough Death to Go Round (1983); the resourcefulness of the disadvantaged, through the songs in Au Chic Resto Pop (1990); and a doctor's battle against AIDS in Doctors with Heart (1993). Four Women of Egypt (1997) features four women who couldn't be more different but who are nevertheless united in their search for meaning and tolerance through 50 years of contemporary Egyptian history. In Emergency! A Critical Situation (1999), an entire emergency room team speaks about their difficult work, while in For a Song (2001), it is extracurricular activities such as singing in a choir that are found to restore social ties, lift the soul and create beauty. Soraida, A Woman of Palestine (2004) captures the reflections, concerns and imagination of a Palestinian woman, her family and her neighborhood, the soul of a nation that is doing its best to survive the war and occupation.