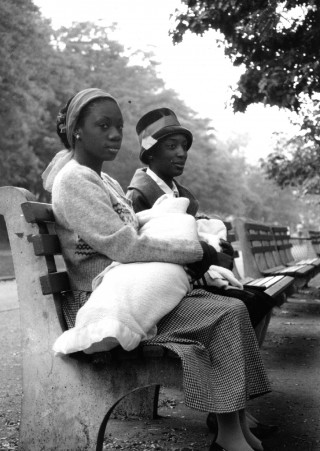 A film by Lisa Collins

Shame and embarrassment propel Savannah, a gifted high school student, to embark on a journey through space and time to witness the prison convictions of her great-grandmother Etta Mae, her grand-aunt Olive, and her aunt Denise. The fanciful and chilling tales of a delightfully vain maid in the 1920s, a hopelessly depressed nanny in the 1950s, and a mother frustrated during the holiday season in the 1980s, help Savannah reconcile her feelings about her own past in this touching coming-of-age story. An imaginative, thoroughly engaging drama that speaks volumes about identity and self-worth, TREE SHADE will have special appeal to teenage viewers and delight audiences of all ages.

“'Tree Shade', a remarkable debut film by Lisa Collins shot entirely MOS, took the award for best American short...Three and a half years in the making, the completion of 'Tree Shade' is as much a story of triumph over adversity as the film itself...”

"'Tree Shade' is a magical, imaginative trip through a family's past where images of reality and fantasy often become one. Lisa Collin's talent for characterization and storytelling is quite evident and truly a rare delight."

Lisa Collins earned her Master’s in Screenwriting and Directing from Columbia University Film School, with a B.A. from Yale in American Studies/Photography. Currently, she’s the Sr. Editor/Sr. Segment Producer for Hollywood.com. She wrote, directed and executive produced two shorts: MISS RUBY’S HOUSE, a mockumentary; and TREE SHADE a surreal black comedy that garnered the Gold Medal for Best Alternative Film at the Student Academy Awards, and was invited to festivals including: Sundance, Atlanta, Seattle, Newport, Avignon and Cannes. It headlined PBS’s "Reel New York" series; won several top fest prizes and a DGA award. She work shopped her script, THE GRASS IS GREENER at the Sundance Screenwriters and Filmmakers Labs.

With several projects cooking in development, Lisa’s most recent, OSCAR’S COMEBACK is a complex documentary inspired by the Oscar Micheaux Film Festival in Gregory, South Dakota, about an all-white town celebrating its famous native son--early 1900s black film pioneer Oscar Micheaux. Shot over four summers, she’s directed and produced it with co-director/producer Mark Schwartzburt. The doc-in-progress has been awarded grants from the South Dakota Humanities Council and NYSCA.

Coming-of-age in a conflicted, racially diverse Brooklyn and being a first-generation American of Jamaican/Cuban parents serves as a source of endless inspiration, humor and raw material. (8/14)