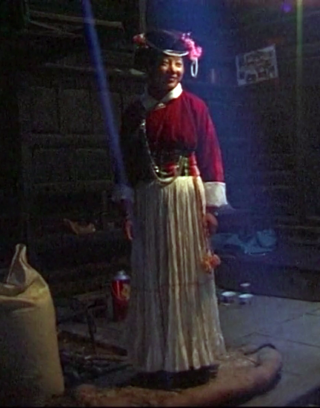 Visitors of the Night

A film by An van Dienderen

The failures of the ethnographic endeavor to discover “reality” are revealed in this expository and experimental film. The narrator-ethnographer embarks on an expedition to encounter the Mosuo, an isolated and matrilinear tribe in the mountains of South West China. Their society is built on the principle of the axia-relationship, ties between ‘visitors of the night.’ This means that a man only stays in his wife’s house at night and during the day he works for the benefit of his grandmother. Since men and women do not have economical obligations, their unique, polyandric relationships are based on love only. Recently due to funding by the Han government, The Lugu region has turned into a major touristic area, where tradition and modernity clash -- particularly when the polyandry of the Mosuo is seen as prostitution by outsiders. Van Dienderen, a visual anthropologist, playfully reveals the distance between textual knowledge and the experience of a cinematographic journey in a thoughtful and fascinating documentary.

Filmmaker An van. Dienderen works at the intersection between documentary, anthropology and visual arts. While exploring various documentary strategies and the anthropological relation between self and other, she also investigates the medium of film in a self-reflective way. She explores the opposition of fact and fiction, imagination and observation, representation and experience, using the importance of the image in our multicultural society as a point of departure. Her work shows the absurd, poetic, and often touching stories that these oppositions can hold in everyday life. She graduated in audiovisual arts (Sint-Lukas, Brussels), obtained a PhD in Comparative Cultural Sciences (Ghent University), and was a visiting scholar at UC Berkeley. She made several documentaries screened worldwide, awarded with (inter)national prizes. Films include Visitors of the Night, Site, Tu ne verras pas Verapaz , The Ephemerist, Patrasche, a Dog of Flanders - Made in Japan, Cherry Blossoms, Letter Home and Lili. She regularly publishes on visual/performative anthropology, is a lecturer and artistic researcher at the School of Arts Ghent, and initiated the international art workspace SoundImageCulture. Her work has been shown on the Margaret Mead Film and Video festival (New York), FID Marseille, DocFest Sheffield, Belluard Festival (Fribourg), Yerba Buena Center San Fransisco, DMZ Korea International documentary festival, International Short film Festival Oberhausen, Festival Internacional de Documentales de Santiago, International Filmfestival Rotterdam, Videonale Bonn, Center for Contemporary Art Zagreb, 25FPS Festival Zagreb (C), Museum of Contemporary Art, Athens (G), Bienal de la Imagen en Movimiento. Learn more: www.anvandienderen.net (07/19)