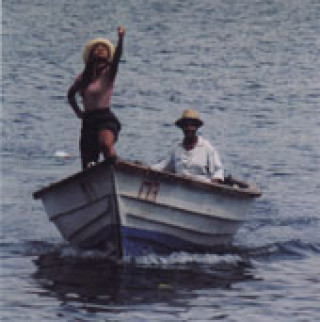 What My Mother Told Me

A film by Frances-Anne Solomon

Exquisitely beautiful and profoundly moving, WHAT MY MOTHER TOLD ME is a dramatic journey towards self discovery. The story focuses on Jesse, a young woman from England, who goes to Trinidad to bury her father. Reluctantly she agrees to meet her mother, whom she thought had abandoned her when she was a child. Her mother tells her stories, revealing a troubled and violent marriage, and Jesse is forced to face the truth about her past. WHAT MY MOTHER TOLD ME cleverly evokes complex connections between history, memory, violence and cultural identity.

“A haunting and memorable film. The acting is outstanding with excellent cinematography and a beautiful musical score. It could be used to spark discussions on any number of relationship issues or be viewed just for its touching and intriguing story.”

Frances-Anne Solomon is an award-winning filmmaker, writer, producer, curator, distributor and entrepreneur in film, TV, radio, theatre, and new media. Born in England of Trinidadian parents, she was raised and educated in the Caribbean and Canada before moving to Great Britain where she built a successful career with the BBC as a TV Drama Producer and Executive Producer.

She moved to Toronto in 2000, where she continued to create, write, direct, and produce her own projects. Her most recent film, A Winter Tale, received many prestigious international awards, including most recently at FESPACO 2009 (Africa’s Oscars held biannually in Burkina Faso West Africa) where it was won Special Mention in The Paul Robeson Diaspora Category.

As well as directing, Frances-Anne is the Artistic Director and President of the two companies she founded, Leda Serene Films, her film and television production vehicle, and CaribbeanTales, a prolific not for profit company that makes multimedia products aimed at the educational market.

She began her television career at Banyan Productions in Trinidad, and studied Theatre at the University of Toronto with Steve Martineau and Ken Gass, and poetry with Jay MacPherson. She trained as a film director in the UK at Bristol University’s RFT Programme and the prestigious BBC Drama Directors Course. (8/14)