Alexis Clements is an award-winning writer and filmmaker based in Brooklyn, NY. Her creative work has been published, produced, and screened in venues across the US, as well as in Europe, South America, and Asia. Her feature-length documentary film, All We've Got, which focuses on LGBTQ women's spaces at a time when many are closing, premiered in October 2019 at NewFest in New York City and has since screened around the globe. In 2021, she launched a podcast, The Answer is No, focused on artists sharing stories about challenging the conditions under which they are asked to work. And in 2019, her play, Unknown, also premiered in October 2019 in Minneapolis, Minnesota. In addition, her writing has appeared in The Los Angeles Review of Books, The Guardian, Bitch Magazine, American Theatre, The Brooklyn Rail, and Nature, among others. She is also a regular contributor to Hyperallergic. She has received grants from the New York City Artist Corps, the Arch and Bruce Brown Foundation, the Puffin Foundation, and the Ludwig Vogelstein Foundation, as well as being awarded a Dramatists Guild of America Fellowship and the Source Theatre's Washington Theatre Festival Literary Prize. She has a M.Sc. in Philosophy & History of Science from the London School of Economics and Political Science and a B.A. in Theater Studies from Emerson College. She is currently serving as a volunteer Coordinator at the Lesbian Herstory Archives where she co-founded Little Rainbows, a story time for queer youth and their caretakers and parents. She has also served on the Executive Board of CLAGS, the Center for LGBTQ Studies at the City University of New York (CUNY).

Alexis has been invited to speak, moderate panels, and teach workshops on topics ranging from the arts economy to LGBTQ women’s communities, at venues such as Harvard University, the Brooklyn Museum, and TEDx Chelsea. Her media appearances include NPR's Marketplace, NY1, Gay USA, Oregon Public Broadcasting's radio program Think Out Loud, and she has been quoted in outlets such as Forbes, HuffPost, and Slate, among others. (5/22) 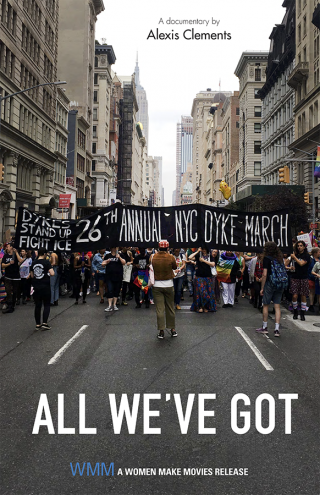 ALL WE’VE GOT is an insightful personal exploration of LGBTQI women’s communities, cultures, and social justice work through the lens of the spaces they create, from bars to bookstores to arts and political hubs. Social groups rely on physical spaces to meet and build connections, step outside oppressive social structures, avoid policing and violence, share…