Five fierce and funny women with limited sight and limitless vision dare look into the dark and share their light.

Legally blind since childhood from Stargardts disease (a rare inherited form of juvenile macular degeneration), THE WRITER is in a doctor’s office for one of her twice yearly follow up visits. In between tests, THE WRITER directly engages and entertains the audience with stories of five women who share her special kind of sight. As the tests continue, it’s clear that THE WRITER’S decades of stable vision may now be changing for the worse.

Fighting despair and fueled by her vivid imagination, she turns visual field tests into celestial landscapes, and stories of vision-challenged women into stars.

Finally called in to hear her fate, THE WRITER is fearful. But armed with the stories of her stars she sings an anthem of resilience.

SEEING STARS is a powerful, heartfelt solo musical brilliantly weaving together stories of five diverse women with Stargardts disease. Ellen Gould’s writing and performance deftly intertwines their stories, including her own, in this film adaptation of her award-winning theater production. You will laugh, cry, be drawn into the depths of each woman’s soul and marvel at their grit and humor as they face losing sight. SEEING STARS speaks to all who struggle with disability and is ultimately a universal story of hope and resilience.

-Martha Steele, Board member of Foundation Fighting Blindness and Carroll Center for the Blind 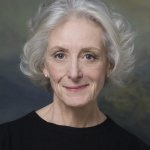 Kathleen Butler is a NY based actor and director. She has played principal roles on stage, in film and TV for over 40 years. A colleague of Edward Albee, she starred in many World Premieres of Albee's plays including THREE TALL WOMEN, later directing his work throughout the United States (her recent direction of A DELICATE BALANCE was just nominated for a BroadwayWorld Regional Award). Kathleen's other directing projects include POUND, starring Christopher Lloyd and the debut of SEEING STARS at The United Solo Theater festival in NYC, where she won the award for Best Direction.

Ellen Gould (Writer, Performer and Co-Producer) is a double Emmy Award-winning writer and performer of solo musicals. Inspired by artists like Spalding Gray, John Leguizamo and Anna Deavere Smith, Ellen is one of the first writer/performers to extend solo theater into the musical realm. She is perhaps best known for BUBBE MEISES, BUBBE STORIES, a musical about the immigrant experience, that opened to critical acclaim Off-Broadway. The made-for-television adaptation of BUBBE MEISES, BUBBE STORIES, aired on PBS and won Ellen two Emmys for her work as writer and performer. (www.ellengould.org)