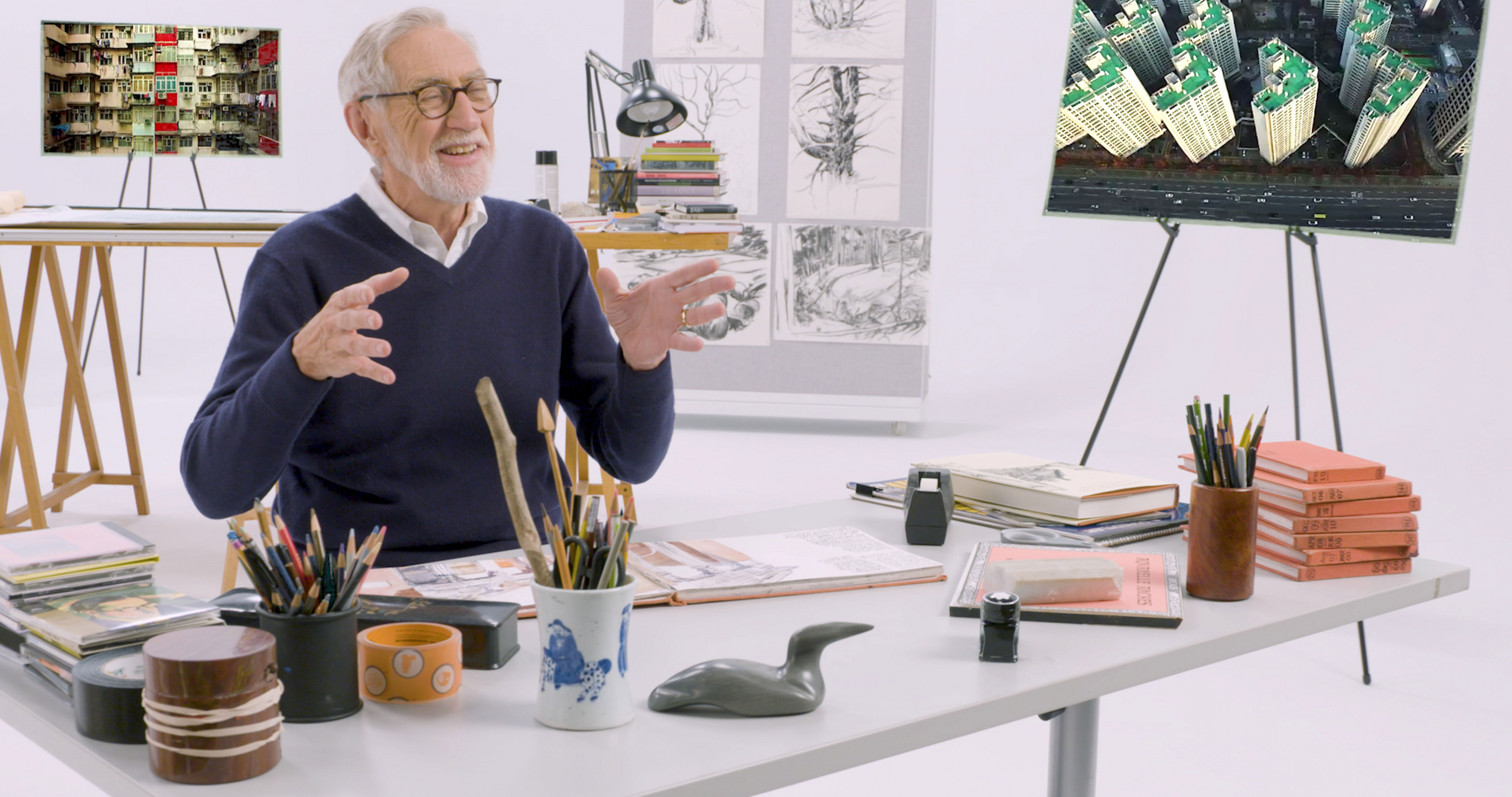 Artist, scholar, architect, landscape architect, professor, author, urban visionary, and unparalleled designer of cities, Laurie Olin is a true Renaissance man who, along with world-renowned architect Frank Gehry, takes us on a visual, eye-opening journey through natural and built environments, revealing the connective tissue for creating healthy and humane societies.

While you may not know his name, chances are high you know his work. Laurie Olin is responsible for many of the most iconic and beloved parks, gardens and public spaces in the country, including the Getty Center gardens, Battery Park City, Columbus Circle, the National Gallery of Art Sculpture Garden, the Washington Monument grounds, Bryant Park, Mission Bay, and Independence Mall to name a few. But his imprint on cityscapes extends all over the globe.

Olin’s motivation has always come from the social aspects of urban design, working passionately to keep cities viable for all citizens with a special focus on the economically marginalized. Over the course of a career spanning fifty years, Olin has aspired to create a level playing field—a more democratic, egalitarian society through shared public spaces.

Given the disproportionate growth of the world’s largest metropolises with more people than ever before being born, living and dying in cities, Olin and his collaborators like Frank Gehry, urge us to take a closer look at the health and survival of our cities. They reveal how our sense of place is either degraded diminished through overbuilding and neglect, or enhanced through purposeful design and social encounter.

Olin's life story will become a launching pad for the exploration of themes and ideas about the world in which we live: the overwhelming disconnect with nature, the effects of population explosion, the failed promise of the suburbs, the global water and climate crisis, and building economically-driven environments instead of human ones.

My passion for landscape architecture began in the mid-1990s when I won a nationwide RFP to create a documentary for The National Park Service, the American Society of Landscape Architects and The Garden Conservancy. That film demanded total immersion in the field and took three years to write and create. It was truly about Americans and their connection to the land.

I have continued to make films on landscape architecture, creating six 90-minute, oral histories on master landscape designers between 2011-2016. It was through this series that I originally met Laurie Olin in 2012 and was struck by his brilliance, charisma and masterful storytelling. It was then that I knew a different kind of film needed to be made about this major artist and his vision of the world.

I’ve been fortunate enough to make award-winning documentaries on other subjects including one about twin survivors of Auschwitz, another on the cultural erasure of the native inhabitants of the ancient city of Akko, and a traveling exhibit film on the history of planet earth. In essence, all of these documentaries have been about the human condition, displacement, survival and ultimately, our relationship to the land.

The importance of Olin’s work cannot be satisfactorily measured in terms of the size, significance, or number of his commissions; their international range; or the celebrity of his architectural and artistic collaborators--although he comes near the top of any list one could make of those criteria. Rather, its significance derives from the combination of immense artistic resourcefulness and deep humanism that he brings to all his work—unerringly, magnificently, and (most astonishingly) in so many different shapes and formulations.
--Professor David Brownlee, PhD, University of Pennsylvania, Department of the History of Art

Filmmaker Gina Angelone’s credits include Producer of Bravo’s “Inside the Actors Studio,” (Cable Ace and Emmy award), creator of “Music Shorts” for Comedy Central, and Writer-Producer-Director of “Connections” (PBS). Her Emmy-winning documentary “René & I,” (NBC) continues in worldwide distribution and her film “It’s Better to Jump,” won seven awards internationally including the MPAC Award for social justice (theatrical release 2013, Al Jazeera 2015). In 2016, Gina wrote and directed the original series, “Defining Beauty” for Disney/MAKER Studios. Between 2011- 2016, Gina directed six 90-minute biographies on master designers for The Cultural Landscape Foundation. She has created a centerpiece film for the American Museum of Natural History, interactive media for Universal Studios/Disney World, and an exhibit film for the Smithsonian Institute, and directed the pilot for "Land of the Free" (RioVista Entertainment, 2018). Gina was Associate Producer of “Raffi on Broadway” (Gershwin Theatre) for the Disney Channel/MCA Home Video and is a published author who has scripted for web, TV and film. Gina's work has received notable grants from New York Women in Film, The Stonewall Foundation, the National Endowment for the Arts (2016 & 2018 grantee), the Graham Foundation (2018), the Philadelphia Foundation (2015), a Lenfest grant (2017), a Speranza Foundation grant for writing (2018), and grants from several private foundations . Gina is fluent in four languages, has lived and worked all over the globe, and now resides in Los Angeles.