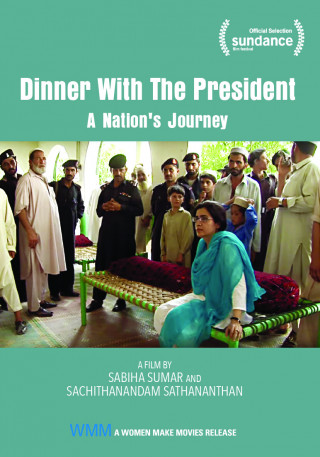 Pakistani filmmaker Sabiha Sumar and co-director Sachithanandam Sathananthan request a dinner with President Musharraf as he’s facing impeachment charges and engage him in an enlightening discussion about the past and his vision for the country.

When Pakistani filmmaker Sabiha Sumar and co-director Sachithanandam Sathananthan request a dinner with President Musharraf as he’s facing impeachment charges in 2007, to their surprise the request is granted. They engage him in an enlightening discussion about the past and his vision for the country. Going beyond the dinner table, the filmmakers interview a wide range of Pakistanis including religious fundamentalists and young beach partiers about issues such as the role of women in politics and the meaning of democracy. The conversations reveal a nation full of contradictions, where ethnic and tribal loyalties struggle against modernization. DINNER WITH THE PRESIDENT asks audiences to rethink conventional Western wisdom about individual rights, power, and political process.

"The movie makes engaging points on the political evolution of Pakistan. Confident and cool-headed, Ms. Sumar is a dynamic screen presence and shrewd interlocutor."

"In interviews with citizens of all backgrounds, the filmmakers absorbingly convey the worldview of the Pakistanis - as well as their displaced hopes."

Born in Jaffna, Sri Lanka, Sachithanandam Sathananthan holds a PhD from the University of Cambridge and has produced and directed a number of acclaimed films spanning across both fictional and documentary genres. Sathananthan’s interests often reside in the subject of national and social movements, particularly concerning issues of gender and religion in Pakistan, as well as his native Sri Lanka. His producing credits include WHERE PEACOCKS DANCE (1992), SUICIDE WARRIORS (1996), and KHAMOSH PANI: SILENT WATERS (2003) a feature film about the growth of Islamic extremism in Pakistan, which won the Grand Leopard prize at the 56th Locarno International Film Festival. All three films were produced by the Pakistan-based company Vidhi Films, which Sathananthan co-founded.

Vidhi Films also produced the widely acclaimed DINNER WITH THE PRESIDENT: A NATION’S JOURNEY (2007), of which Sathananthan co-directed with frequent collaborator Sabiha Sumar. The film centers around intimate dinner conversations with the former President Pervez Musharraf, who seized complete control of Pakistan in 1999 via a military coup. The film was nominated for the Grand Jury prize at Sundance in 2008, premiering in the festival’s World Cinema Documentary section. (3/19)

Acclaimed director Sabiha Sumar, recent winner of the Golden Leopard at the Locarno International Film Festival for her feature Silent Waters, offers an insightful perspective on Pakistan in this finely crafted personal film. Beginning with the creation of Pakistan in 1947, Sumar traces the relationship of Islam to the state in an effort to understand how women are coping with and surviving the increasing religiosity of civil and political life in her country. Raised in a more secular time, she struggles to comprehend how religious schools have expanded at once unthinkable rates and presents chilling footage of a mother encouraging her toddler to be a martyr when he grows up. Mixing political analysis with interviews with activist colleagues, noted Islamic scholars and Pakistani women who have chosen to embrace fundamentalism, Sumar’s provocative questions dramatically capture the tension between liberal and fundamentalist forces that are shaping life in contemporary Pakistan. “Less an ethnography than a philosophical and historical inquiry into the meaning of gender within Islam, it provides a witty, incisive, and important reflection on the "parameters" of gender hierarchy and, indeed, the "truth" of law, both secular and religious. Required viewing to understand some of the specific ideological conundrums within the sexual politics in Pakistan.” Joseph Boles, Northern Arizona University
Learn more