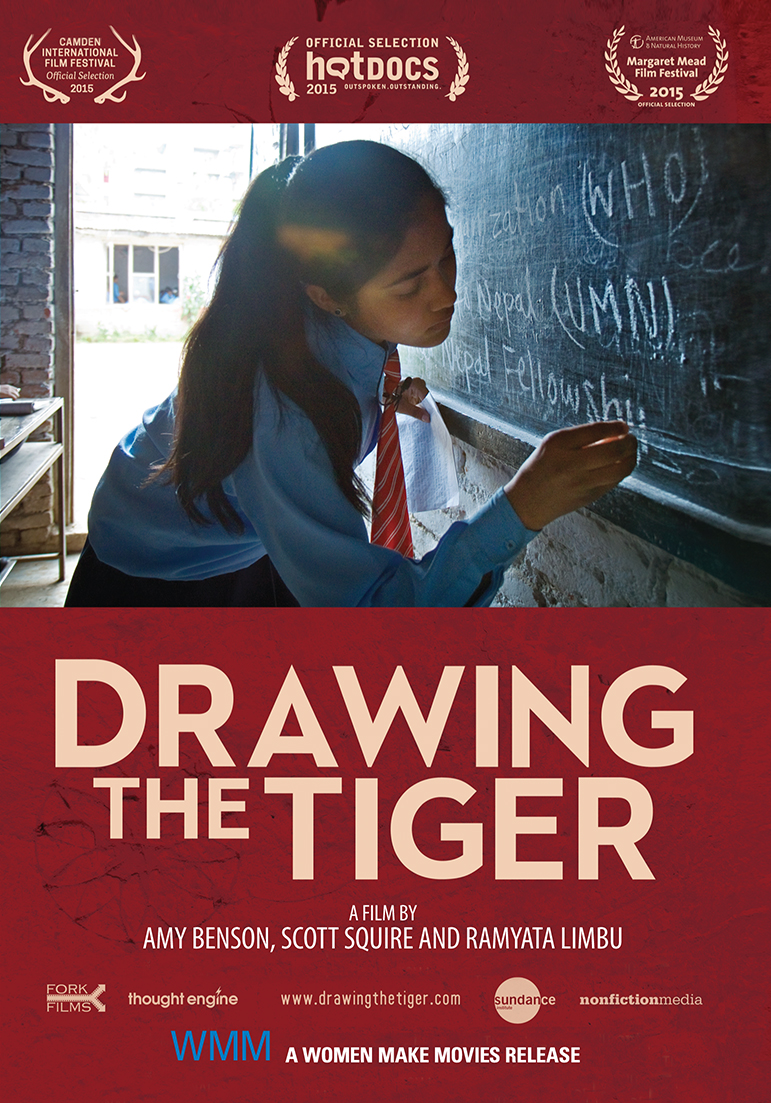 Shot over seven years, Drawing the Tiger takes a sweeping view of one Nepalese family’s daily struggle to survive off of subsistence farming. Eat, pay their debts, stay alive—that’s their day-to-day reality. But when their bright daughter receives a scholarship to study in Kathmandu, the family’s prospects suddenly improve by leaps and bounds overnight. They rest their hopes and dreams on her narrow shoulders, but will the weight of their expectations crush her? Can she really break the cycle of poverty and redefine their collective destiny? She seems eager to try, promising to return and free her family from their hand-to-mouth existence. But when she doesn’t come home, the family is forced to face their fate. Is their future set in stone or sand; is it solid or ever-shifting? Drawing The Tiger is a powerful portrait of pressure and the price one family pays for their golden opportunity that reminds us of what we can and cannot change.

"A quietly powerful film that will stick with viewers long after it ends."

"The filmmakers’ unwavering commitment to truthful storytelling achieves a rare, nonjudgmental respect for the lives of the people they observe."

Amy Benson left her career as a middle school girls teacher to become a documentary filmmaker. Since switching fields, Benson has shot and edited over 30 short films telling the stories of nonprofits in North America, Africa and Asia. Her first independent documentary short, CALLED TO SHINE, about Clarksdale, Mississippi’s only female preacher premiered at the Langston Hughes film festival. Another short, THREE: IMPRESSIONS FROM THE STRUGGLE FOR GIRLS’ EDUCATION, was the centerpiece of the UNIFEM Singapore film festival. With her husband, Scott Squire, Amy co-owns Nonfiction Media, a production company based in Seattle. Amy is also a founding member of the Seattle Documentary Association - a community for Seattle filmmakers to thrive. Her first feature documentary, DRAWING THE TIGER, is a granted project of both the Sundance Institute and Fork Films. It premiered at Hot Docs in April 2015 and has since been in over 30 film festivals worldwide. It has been awarded the Best Feature Jury prize by the Northwest Film Forum, the Documentary Feature Award from CAAM Fest (Center for Asian American Media) and the UNICEF award at Film South Asia in Kathmandu, Nepal.

Amy has a Tedx talk about her experience making DRAWING THE TIGER. (01/20)

Scott is a lifelong photographer with a masters in journalism (Berkeley). His work on a homeless children living in Bucharest earned him the Dorothea Lange Fellowship and the Susan Meiselas Fellowship from UC Berkeley. Scott’s photo essay on post-9/11 Cairo street café culture was featured on PBS’s Frontline World website. His first book, Edges of Bounty (2009, Heyday Press), is a fine art documentary photo essay on small scale, independent food production in the Central Valley of California. His latest book of photography, See Them Run: Great Plains Coyote Coursing (University Press of Mississippi) was released in November 2015. Drawing the Tiger is his first feature. (6/18)

Ramyata co-produced and shot the documentary Dreams of Chomolungma for PBS’s Frontline World, and co-produced and shot the award winning feature documentary, Daughters Of Everest. For six years she was a producer for Young Asia Television, producing programs focusing on social issues in Nepal. Ramyata is the also the director of the Kathmandu International Mountain Film Festival (KIMFF). Her most recent documentary work is co-producing Sari Soldiers, another Sundance Institute grantee— a film about female soldiers on both sides of the Maoist insurgency in Nepal. She is currently working as a correspondent for Al Jazeera. She has been busy covering the stories of people and places hardest hit by the 2015 Nepal earthquake.

There is a group of people in the world today who are more persecuted than anyone else, but they are not political or religious activists. They are girls. Being born a girl means you are more likely to be subjected to violence, disease, poverty and disadvantage than any other group on Earth. In I AM A GIRL, we meet 14-year-old Kimsey from Cambodia, forced to sell her virginity at 12; Aziza from Afghanistan, who will be shot if she goes to school; Breani, a teen living in a ghetto of NYC and dreaming of stardom; Katie from Australia, who is recovering from a suicide attempt; Habiba from Cameroon, betrothed to a man 20 years her senior; and Manu from Papua New Guinea, about to become a mother at 14 following her first sexual encounter. As they come of age in the way their culture dictates, we see remarkable heart-warming stories of resilience, bravery and humor. Nominated for four Australian Academy Awards including Best Documentary and Best Director, I AM A GIRL is an inspirational feature length documentary that paints a clear picture of the reality of what it means to be a girl in the 21st century. I AM A GIRL provides practical and ready-to-use resources for educators to address human rights and social justice issues affecting girls in the classroom. Girl Be Heard Education Guides for I AM A GIRL are three units of 25 total lesson plans aligned with US Common Core Curriculum (grades 9-12), to provide a practical and ready-to-use resource for teachers to address human rights and social justice issues affecting girls around the world. Girl Be Heard Education Guides for I AM A GIRL help teachers bring important human rights topics and a future of gender equality to the classroom. For more information, go to: http://girlbeheard.org/i-am-a-girl-education-guides.
Learn more

Thulasi, a young Indian woman in her twenties, is literally willing to box her way out of poverty and into a better life. A Dalit or “untouchable” born outside of caste, she rejected her place on society’s lowest rung at an early age and was forced to leave her parents’ home when only 14. Ten years later, despite her impressive record in the ring, ranking 3rd in India’s Light Fly category, Thulasi remains stuck at the bottom, deprived of opportunities she rightly deserves. Despite an uphill battle against sexual harassment, poverty and the pressure to marry, Thulasi refuses to compromise herself and her goals and takes her destiny into her own hands. Filmed during three eventful years, LIGHT FLY, FLY HIGH is a beautifully shot, gripping and inspirational story of a courageous young woman who refuses to be anyone’s victim and ends up a hero of her own making against all odds.
Learn more