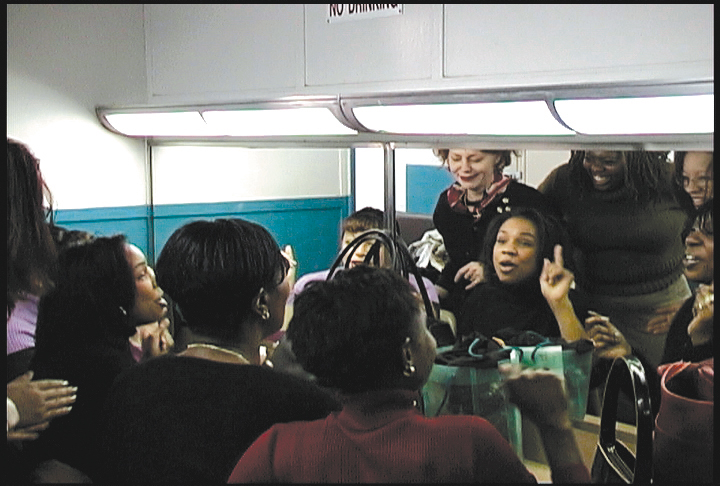 A film by Katja Esson

Academy Award Nominee for Best Documentary Short, FERRY TALES exposes a secret world that exists in the powder room of the Staten Island Ferry--a place that brings together suburban moms and urban dwellers, white-collar and blue-collar, sisters and socialites. For 30 minutes every day, they gather around mirrors to put on their makeup – talking not as wives, mothers, or professionals, but just as themselves. Sassy and honest, they dish on everything from sex scandals to stilettos, family problems to September 11th, leaving stereotypes at the door and surprising viewers with their straight-shooting wisdom.

In broaching such topics as divorce, single motherhood and domestic violence, FERRY TALES goes beyond the surface to show us the realities of life for working women. A rare and honest look at the intersections of race and class, this heartwarming film is also a must have for women’s studies, urban studies and sociology departments. Utterly charming and often outrageous, FERRY TALES gives these unlikely heroines their moment in the spotlight.

'Esson's film gives a fantastic glimpse into one of the countless secret sub-cultures of New York. Her brilliant portrayal rethinks class and gender and turns our ideas of the suburban/urban divide on their head...with important lessons for sociology, women's studies, and urban history alike."

“A delightful microcosm of a diverse group of women…their views of the world, race, relationships, and the challenges and the joys of the working woman in today’s society.”

“An exploration of a floating community, both transitory and enduring, cliquish and inclusive, performative and insular, this engaging documentary gives new meaning to the notion of the transference of identity…an important contribution to the study of gendered space, racial politics, and urban class dynamics.”

Academy® Award nominated director Katja Esson’s (FERRY TALES, LATCHING ON) exquisitely made film explores survival, strength and the power of the human heart, body and soul—as expressed through poetry. She highlights six different poets, who individually survived Hiroshima, the Holocaust, China’s Cultural Revolution, the Kurdish Genocide in Iraq, the Rwandan Genocide, and the Iranian Revolution. By summoning the creative voice of poetry to tell stories of survival and witness, each reclaims humanity and dignity in the wake of some of history’s most dehumanizing circumstances. POETRY OF RESILIENCE gives us an intimate look into the language of the soul and brings us closer to understanding the insanity of war and how art will flourish, in spite of any obstacle.This film is recommended for courses in poetry studies, literature, peace and conflict studies and genocide studies.
Learn more

After filmmaker Katja Esson’s sister gave birth in Germany, she was able to breastfeed her baby anywhere and at any time. Returning home to New York, Esson found that breastfeeding was rarely practiced and largely unseen. Academy Award® Nominee Esson (Ferry Tales) turned her quirky eye on the subject and set out to learn why this was so. Her wide-ranging, frequently funny documentary highlights the intersecting economic, social, and cultural forces that have helped replace mother’s milk with formula produced by a billion dollar industry, and reveals the challenges and rewards for women who buck the trend. Latching On draws on lively first-hand accounts from mothers of diverse ethnicities and economic backgrounds, as well as candid observations by pediatricians, healthcare providers, lactation specialists, and the proprietor of New York’s first breastfeeding boutique. Including data about paid maternity leave, hospital post-delivery policies, and workplace accommodations for nursing mothers, the film compares current US practices with standards adopted elsewhere. Tensions around public breastfeeding and "breast is best" promotion campaigns highlight society's perceived interest in regulating women's reproductive behavior, as well as the power of culture to assign sexual and moral meaning to mothers' bodies. Entertaining and insightful, Latching On is an important analysis of the politics of breastfeeding, illuminating the complexities behind a simple, natural act.
Learn more
Shopping Cart