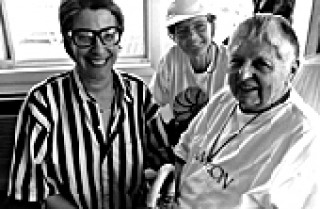 A film by Lucy Winer and Karen Eaton

Profiling the life of 93 year old lesbian activist Christine Burton, founder of a global networking service for mid-life and elder lesbians this documentary by Lucy Winer and Karen Eaton, exuberantly overturns our most deeply rooted stereotypes and fears of aging. By adding the wry and introspective narrative of the director undergoing a mid-life crisis, the film generates a groundbreaking, intergenerational dialogue about sexuality, life choices, and aging. At a time when the media commonly sentimentalizes, dismisses or altogether ignores the old, GOLDEN THREADS offers an urgently needed antidote. GOLDEN THREADS was produced for the Independent Television Service (ITVS) with funds provided by the Corporation for Public Broadcasting.

"Offers an exhilarating look at a tireless leader [and] integrates an intergenerational dialogue about intimacy, life choices, and what it means to grow old in America."

“…A brilliantly affecting and stylish film which turns seismic events into glorious cinema.”

“...A truly unsentimental, caring and yet challenging little gem. In one short hour, Golden Threads shows us what we are missing - our elders, our wisdom, our experience, our survival.”

"Winer's film about the work and indomitable spirit of the 93-year-old lesbian activist Christine Burton portrays the kind of history that we all need to know."

Karen Eaton, Producer/Art Director has been a multimedia graphic designer and artist for over 20 years. She was the founder and President of Canard Design, Inc., a multimedia design studio in New York. She served as Associate Producer on Winer’s films RATE IT X and TALES OF AN EXHAUSED WOMAN, as well as Art Director on Silent Pioneers. Most recently, Eaton acted as producer on a feature-length documentary entitled KING PARK: STORIES FROM AN AMERICAN MENTAL INSTITUTION. (8/14)

During the 1970s and 80s, thousands of New York’s primarily Jewish senior citizens migrated to Kings Point, a retirement community in Florida. Lured by blue skies, sunshine and the promise of richer social lives, they bought paradise for a mere $1,500 down payment. 2013 Academy Award® nominee for Best Documentary (Short Subject), KINGS POINT tracks the stories of five residents of this typical retirement complex who arrived decades ago with their health intact and spouses by their sides. Now that they and their community, comprised primarily of widowed women, face advanced age and mortality, paradise demands a higher price. Through candid interviews the film exposes the dynamic interplay of their desire for independence, need for community, and ambivalence toward growing old. Filmmaker and Emmy® nominee Sari Gilman deftly balances seriousness with humor, providing a bittersweet look at love, loss and self-preservation as well as a deeply empathetic portrait of aging in America and the American Dream’s last act.
Learn more
Shopping Cart