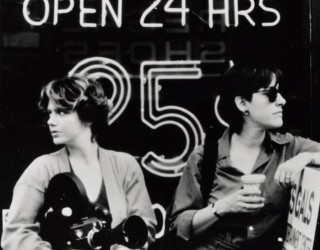 What do men really think of women? This provocative, highly acclaimed documentary provides an unflinching look at sexism in America. A series of disturbing though sometimes amusing portraits uncover obvious culprits such as advertising firms and porn shops as well as often overlooked pockets of sexist imagery which promote gender stereotyping and reinforce negative conceptions of women and sexuality. With great humor and compassion, the film reveals men's deeply imbedded attitudes, showing how sexism becomes rationalized through commerce, religion and social values. Hotly controversial upon its release, RATE IT X is a challenging, invaluable film that illuminates crucial issues of censorship, advertising, pornography and violence against women. Produced by Lynn Campbell, Claudette Charbonneau, Paula De Koenigsberg and Lucy Winer.

"Takes the blinders from our eyes. Not only entertains, it changes us."

"Superb. An important contribution to current discussions of feminism, sexuality and media culture."

"Funny and outrageous, produced with humor, insight and irony."

"Presents a comic yet insightful portrait of the sexism that still permeates American popular culture."

Profiling the life of 93 year old lesbian activist Christine Burton, founder of a global networking service for mid-life and elder lesbians this documentary by Lucy Winer and Karen Eaton, exuberantly overturns our most deeply rooted stereotypes and fears of aging. By adding the wry and introspective narrative of the director undergoing a mid-life crisis, the film generates a groundbreaking, intergenerational dialogue about sexuality, life choices, and aging. At a time when the media commonly sentimentalizes, dismisses or altogether ignores the old, GOLDEN THREADS offers an urgently needed antidote. GOLDEN THREADS was produced for the Independent Television Service (ITVS) with funds provided by the Corporation for Public Broadcasting.
Learn more

A kaleidoscope of music, dance, stories and laughter shared at the first gay and lesbian rights march on Washington.
Learn more

Inspired by a poem by Maya Angelou, this powerful film explores images of Black women in the media, focusing on the myths surrounding Black women's sexuality. Like COLOR ADJUSTMENT, in which Marlon Riggs looked at images of Black people on television, AND STILL I RISE uses images from popular culture to reveal the way the media misrepresents Black women's sexuality. A combination of fear and fascination produces a stereotypical representation which in turn impacts on the real lives of Black women. AND STILL I RISE intercuts historical and media images with hard-hitting contemporary views of women of African heritage as they struggle to create a new and empowered perspective. Both a celebration and a critique, AND STILL I RISE is essential viewing for those interested in African American studies, women's studies, media studies and popular culture. From the director of THE BODY BEAUTIFUL and COFFEE COLORED CHILDREN.
Learn more
Shopping Cart