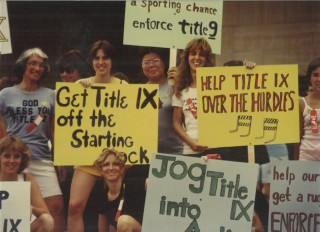 License to Thrive: Title IX at 35

A Film by Theresa Moore

“No person in the United States shall, on the basis of sex, be excluded from participation in, be denied benefits of, or be subjected to discrimination under any education program or activity receiving Federal financial assistance.”

In June of 1972, Congress passed a piece of legislation called Title IX of the Education Amendments, to provide educational access and opportunity for women and young girls throughout the United States. Although most closely associated with sports, no other piece of legislation since the 19th Amendment has been more crucial to opening doors and creating leadership opportunities for women in all arenas including education, science, math, finance, entertainment, the arts, business, law, and politics.

License to Thrive: Title IX at 35 is a smart and highly-entertaining exploration of the unique history of the Title IX legislation and its critical role over the past 35 years in creating female leaders. From the classroom to the boardroom to the courtroom to the green room to the locker room, women are making their mark via the impact of Title IX.

“Schools and organizations may use this film as an historical overview of Title IX or to help build self-esteem in young women."

“An informative and entertaining way to explore the unique story of [this] legislation, as well as its impact on past, current, and future generations…. [Title IX] has made a huge difference in the lives of millions of people.”

“A history lesson every student should see…. The best production I’ve seen showing how Title IX has been a major factor in the dramatic changes of women’s roles in American society over the past three decades, from the home, to the corporate boardroom and, possibly, the White House.”

From the track to the boardroom to behind the camera, Theresa Moore has created history all her life.

Then Moore truly began to make her own unique history. After several years in the business world and earning an MBA from Emory University in Atlanta, Moore got a job at Coca-Cola and then at ESPN where she flourished in the area of sports marketing.

At ESPN, Moore created an audience development platform and a programming initiative entitled The Block Party, which aired for three seasons. The program targeted the urban audience and advertisers seeking to reach that audience. She also created "Images in Black and White" for ESPN in 2005 as a part of the network's programming schedule for Black History Month.

Since leaving ESPN and launching her own company, T-Time Productions, Moore has moved into the world of film production. She now has executive producer, director and co-writer titles to her credit for two documentaries that simultaneously discuss and transcend the world of sports.

In 2007, Moore produced LICENSE TO THRIVE: TITLE IX AT 35 as a multimedia initiative designed to tell the unique history of the Title IX legislation and highlight its critical role in creating female leaders in numerous areas including sports. The initiative's commentary on the ground-breaking 1972 amendment has been highly regarded since its launch.

Her latest project, THIRD AND LONG: THE HISTORY OF AFRICAN-AMERICANS IN PRO FOOTBALL 1946-1989, is poised for similar success. Originally airing on CBS in December 2011, "Third and Long" examines the history, racial struggles, sacrifices and triumphs of African-Americans in professional football from 1946 through 1989, when Art Shell was named the first black head coach of the National Football League's modern era. As the documentary description outlines, THIRD AND LONG explores the history of racial integration in this country and the sport via the impact of societal events such as World War II, the Civil Rights Movement, Brown v. Board of Education, the assassinations of Dr. Martin Luther King and Bobby Kennedy and the Vietnam War. The film is filled with interviews with former players and their wives, coaches and others who were witnessed this time period when pro football integrated for a second time. (8/14)

GIRL WRESTLER follows 13-year-old Tara Neal, a Texas teenager who upsets traditional expectations by insisting that girls and boys should be able to wrestle on the same mat. Zander follows Tara through a crucial period in her wrestling career—the last year that she is allowed to wrestle boys under state guidelines. When Tara enters high school, her opportunities to compete will virtually disappear because so few girls wrestle. Over the course of the season, she deals with family conflicts, pressures to cut weight and fierce policy debates over Title IX. Tara represents a modern kind of girlhood, one that physically embodies feminism by literally placing girls into grappling competition with boys. This eye-opening film shows us how the gender roles we have constructed affect real adolescents as they crash against the boundaries of those norms. Ultimately, Tara’s story is a direct and immediate chronicle of such broader cultural issues as the social construction of masculinity and femininity, athleticism and eating disorders, gender discrimination in organized athletics, and the meaning and value of sport in American culture.
Learn more

From award-winning Hawaiian filmmaker Kimberlee Bassford (PATSY MINK: AHEAD OF THE MAJORITY) comes WINNING GIRL, an inspirational film that follows the four-year journey of Teshya Alo, a part-Polynesian, teenage judo and wrestling phenomenon from Hawai‘i. Teshya is only 16 years old and 125 pounds, but on the judo and wrestling mats, she dominates women twice her age and pounds heavier! Now Alo has her sights set on taking the Olympic gold at both the judo and wrestling world championships - and in doing so would be the first to accomplish that feat. WINNING GIRL tells the dynamic story of an elite athlete on her ascent, a girl facing the challenges of puberty and growing up with an entire family dedicated to a single dream. A great companion piece to any discussion on Title IX and gender.
Learn more
Shopping Cart