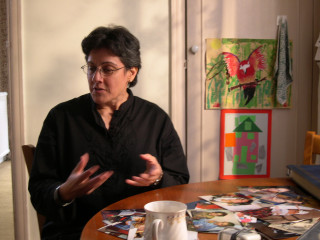 A film by Faction Films, Directed by Saeeda Khanum

Domestic violence in all forms—from physical abuse to forced marriages to honour killings—continues to be frighteningly common worldwide and accepted as “normal” within too many societies. Getting to the heart of current multicultural debates, LOVE, HONOUR, & DISOBEY reveals the issues around domestic violence in Britain’s black and ethnic minority communities through the eyes of the Southall Black Sisters, a small group of women who have been working to combat abuse for more than 25 years.

This powerful documentary combines chilling testimony from those abused with a forceful analysis of the issues that make domestic violence an even more difficult experience for minority women, who generally wait longer to report abuse and seek help. Also astutely examined are the roles of culturally sensitive policing, religious fundamentalism and the attitudes of minority communities themselves in continuing to endanger the lives of many women. This important film is essential viewing for those who wish to further their understanding of domestic violence within ethnic minority communities, including teachers, social workers, police, lawyers, health workers and other professionals working in this realm.

“Insightful and thorough in delineating the social and cultural pathology of domestic violence. Love, Honor, and Disobey stresses that while culture issues contribute to violent crime, these cannot ever be used as excuses to acquit the perpetrators of these actions. Recommended.”

“A gripping film celebrating the courage of women who have fought against all odds to assert their human right to a life free from violence and the threat of violence."

“Illustrate[s] how cultural traditions can promote patriarchal power patterns that play a role in abuse… Recommended for women’s rights collections.”

Saeeda Khanum has worked in television for the past ten years (as an associate producer) on prime time programmes such as "Da Ali G Show", "Kenyon Confronts", "So You Think You're a Good Driver", Undercover Customs and Channel Four News. Previous credits include "World in Action", "Network First", "After Dark" and "Omid's World" - a documentary with comedian Omid Djalili.

As a former print journalist she was runner-up Magazine Writer of the Year 1992 for her work on the New Statesman, and Housing Journalist of the Year 1994 for social housing journal "Inside Housing". She first came to national prominence as co-editor of the community newspaper "Leeds Other Paper" covering the Satanic Verses book burning in Bradford. "Love Honour and Disobey" is her directing debut. (03/06)

QUEST FOR HONOR, which premiered at Sundance and was shortlisted for an Academy® Award, investigates the still prevalent practice of honor killing in the Kurdistan region of northern Iraq.
Learn more

In October 1998, eighteen-year-old Linor Abargil was stabbed and raped while working as a model in Milan. Weeks later she was crowned Israel’s first Miss World. Over the course of five years, director Cecilia Peck (Shut Up & Sing) follows Abargil, on a mission to confront the trauma of her past, including a hunt for other victims of the man who raped her, preventing his parole. Abargil, a poised, magnetic and supremely empathic advocate travels from Hollywood to rape crisis centers, American college campuses and the townships of South Africa to share her story and inspire others to confront shame and to heal. Emmy nominated BRAVE MISS WORLD is a call for justice and a startlingly honest portrayal of how personal tragedy can be transformed into a global awareness campaign against sexual violence. This special edition includes both the theatrical version (88min) and the educational version (60min), which is tightly paced and specifically designed for student audiences. Also included are exclusive bonus scenes, a report by Gloria Allred on a previously unpublished campus rape investigation, survivor testimonials and filmmaker interviews.
Learn more
Shopping Cart