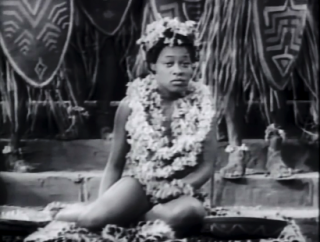 A film by Fatimah Tobing Rony

King Kong meets the family photograph in this provocative experimental film exploring the West's insatiable appetite for native bodies in museums, world's fairs, and early cinema. Intertwining personal narrative about race and identity in the U.S. with layered footage, artifacts and video effects, ON CANNIBALISM looks back at anthropological truisms with outrage and irony.

"...In these times of heated debates around diversity and multiculturalism, ON CANNIBALISM is bound to arouse interesting discussions concerning race, identity and difference. " - Teshome Gabriel, UCLA

"**** Well done and provocative. An excellent discussion starter. Any school or library wanting a vehicle to motivate thinking about colonialism...should consider purchasing this video."

Fatimah Tobing Rony is a writer, director, producer, and professor. She is a two-time winner of Directors Guild of America Student Film Awards, and has been awarded a Rockefeller Media Arts Fellowship, Berlinale Talent Campus, and an ABC/Disney Writing Grant. Her first book is THE THIRD EYE: RACE, CINEMA, AND ETHNOGRAPHIC SPECTACLE (Duke UP, 1996), which won the Society for Cinema Studies prize for best book in the field in 1998, and is in its third printing. Likewise, several of her films are still in distribution years after their initial release. CHANTS OF LOTUS [PEREMPUAN PUNYA CERITA] (2008), which was distributed and exhibited in major theaters in Indonesia, continues to play at film festivals around the world, including the Cinemalaya Philippine Independent Film Festival, the Indonesian Film Festival in Denmark, the Auckland Indonesian Film Festival in New Zealand, the Black Movie Festival in Switzerland, the Udine Far East Film Festival in Italy, and many others. Her short film, EVERYTHING IN BETWEEN (2000) was picked up for online distribution by the premier distributor of Gay and Lesbian Film, Frameline. She is Professor of Film and Media Studies at the University of California, Irvine. (07/19)

It is Hollywood’s favorite role for black women: the maid. Sassy or sweet, snickeringly attentive or flippantly dismissive, the performers who play them steal every scene they are in, and Tracy Moffatt’s entertaining video collage reveals the narrow margin Hollywood has allowed black actresses to shine in. But shine they do. Giving lip is proven an art form in these scenes from 1930’s cinema to present-day movies featuring a remarkable roster of undervalued actresses and their more celebrated white costars. Moffatt and Hillberg’s rough, no-budget assembly effectively highlights with familiarity and humor the disturbing realization of how black characters and white characters still interact on screen, under Hollywood’s eternally backwards eye.
Learn more

SLAYING THE DRAGON is a comprehensive look at media stereotypes of Asian and Asian American women since the silent era. From the racist use of white actors to portray Asians in early Hollywood films, through the success of Anna May Wong’s sinister dragon lady, to Suzie Wong and the ’50s geisha girls, to the Asian-American anchorwoman of today, this fascinating film shows how stereotypes of exoticism and docility have affected the perception of Asian-American women. Produced by Asian Women United, this invaluable resource has been widely used by universities and libraries. SLAYING THE DRAGON: RELOADED is a 30-minute sequel to SLAYING THE DRAGON. RELOADED looks at the past 25 years of representation of Asian and Asian American women in U.S. visual media — from blockbuster films and network television to Asian American cinema and YouTube — to explore what’s changed, what’s been recycled, and what we can hope for in the future.
Learn more
Shopping Cart