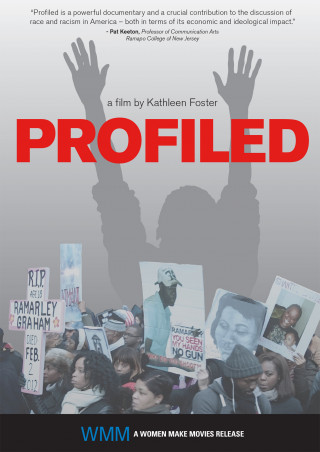 A film by Kathleen Foster

Profiled knits the stories of mothers of Black and Latino youth murdered by the NYPD into a powerful indictment of racial profiling and police brutality, and places them within a historical context of the roots of racism in the U.S. Some of the victims—Eric Garner, Michael Brown—are now familiar the world over. Others, like Shantel Davis and Kimani Gray, are remembered mostly by family and friends in their New York neighborhoods.

Ranging from the routine harassment of minority students in an affluent Brooklyn neighborhood to the killings and protests in Staten Island and Ferguson, Missouri, PROFILED bears witness to the racist violence that remains an everyday reality for Black and Latino people in this country. Moving interviews with victims’ family members are juxtaposed with sharply etched analyses by evolutionary biologist, Joseph L.Graves, Jr, (The Race Myth) and civil rights lawyer, Chauniqua D. Young, (Center for Constitutional Rights, Stop and Frisk lawsuit). PROFILED gives us a window on one of the burning issues of our time.

"… thought-provoking…shows the continued stark disparities in our racial justice system, particularly against African Americans and Latinos… the issue of racial profiling is not a new one; rather it aims to keep our attention trained on it so that we may create solutions."

"Unlike the dozens of films out there documenting the most recent wave of racist state violence, Kathleen Foster’s “Profiled” is neither tragedy nor spectacle. It is inspirational. The mothers, fathers, sisters, brothers, teachers, students, artists, neighbors, and organizers who tell their stories share a single message: mourn and organize, unite and fight. This stops today."

"Profiled is a powerful documentary and a crucial contribution to the discussion of race and racism in America – both in terms of its economic and ideological impact.”

"Excellent! A very real film showing statistics and accurate data of how our families were brutalized then, during our ancestors' time and now! This has to stop! We are more than hashtags and body bags."

“Foster’s superb documentary is part anthropology, part history and completely on message for here and NOW. The film’s topic is extraordinarily relevant as racial profiling has certainly become the center of explosive controversy in media and society. A must see !"

“…vibrant, empathetic, and intelligently realized work… Thank you for your work, your artistry, and your diligence in making it all come together.”

Foster is the recipient of a number of awards. In 2006 Women in Islam presented her with a Compass Awardfor her film Point of Attack. This award honors women whose work exemplifies the legacy of Dr. Betty Shabazz. Point of Attack also received the American Library Association’s Notable Video Award in 2005.At the Workers Unite Film Festival of 2013, 10 Years On: Afghanistan and Pakistan was named Best Short Documentary.

The authors of American War Cinema and Media Since Vietnam (Palgrave Macmillan, 2013) cited Foster’s 2007 documentaryAfghan Women: A History of Struggle as one of only three films that "challenge the dominant ideologies found in contemporary mainstream American war films."

Her current project, Profiled, scheduled to be released in early spring 2016, continues her commitment to films about social justice.

Her films are distributed by Cinema Guild, Third World Newsreel and Filmmakers Library. (4/16))

In much of America, progress in HIV/AIDS treatment suggests the worst is behind us, but every year 50,000 Americans are still diagnosed with the virus that causes AIDS. Astonishingly, it’s one of the leading causes of death of African American women. And nearly half of the Americans with HIV live in the South, where the AIDS epidemic has taken root in rural communities. WILHEMINA’S WAR is an intimate, personal narrative that tells the story of one family’s struggle with HIV over the course of five years. Despite facing institutional and personal obstacles every step of the way, 62-year-old Wilhemina Dixon works tirelessly to combat the stigma and care for her daughter and granddaughter, both HIV-positive. Emmy award winning journalist and Professor June Cross finds Wilhemina, a one woman army fighting against a systemic dehumanization that’s the result of centuries of racism, and lack of access to drugs and treatment. Her story touches upon many of the structural issues that contribute to the alarming rising trend of HIV-positive women in the South: lack of education, lack of access to quality healthcare, lack of transportation, and silence and stigma in the local church congregations. This urgent documentary lays bare the intersection of poverty, race and politics with women’s health and security in the rural south, while showing determination in the face of adversity, and the triumph of the human spirit. Essential viewing for African-American Studies and Public Health courses.
Learn more

When MIT Media Lab researcher Joy Buolamwini discovers that many facial recognition technologies misclassify women and darker-skinned faces, she delves into an investigation of widespread bias in algorithms.
Learn more

For many Black girls raised in the suburbs, the experiences of going to school, playing on the playground, and living day-to-day life can be uniquely alienating. BLACK GIRL IN SUBURBIA looks at the suburbs of America from the perspective of women of color. Filmmaker Melissa Lowery shares her own childhood memories of navigating racial expectations both subtle and overt-including questions like, "Hey, I just saw a Black guy walking down the street; is that your cousin?" Through conversations with her own daughters, with teachers and scholars who are experts in the personal impacts of growing up a person of color in a predominately white place, this film explores the conflicts that many Black girls in homogeneous hometowns have in relating to both white and Black communities. BLACK GIRL IN SUBURBIA is a great discussion starter for Freshman orientation week and can be used in a wide variety of educational settings including classes in sociology, race relations, African American Studies, Women's Studies, and American Studies.
Learn more