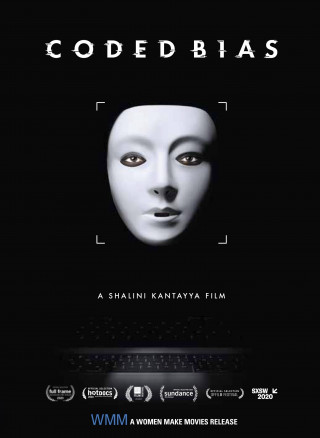 A film by Shalini Kantayya

When MIT Media Lab researcher Joy Buolamwini discovers that many facial recognition technologies misclassify women and darker-skinned faces, she delves into an investigation of widespread bias in algorithms.

When MIT Media Lab researcher Joy Buolamwini discovers that many facial recognition technologies misclassify women and darker-skinned faces, she is compelled to investigate further and start the Algorithmic Justice League. It turns out that artificial intelligence, which was defined by a homogeneous group of men, is not neutral. What Buolamwini learns about widespread bias in algorithms drives her to push the U.S. government to create the first-ever legislation to counter the far-reaching dangers of bias in a technology that is steadily encroaching on our lives.

Centering on the voices of women leading the charge to ensure our civil rights are protected, Coded Bias asks two key questions: what is the impact of Artificial Intelligence’s increasing role in governing our liberties? And what are the consequences for people stuck in the crosshairs due to their race, color, and gender?

"Thought-provoking. ‘Coded Bias’ serves as both a wake-up call (to invasive practices the public doesn’t yet realize are being implemented) and a call to action."

"The most cleareyed of several recent documentaries about the perils of Big Tech (“The Great Hack,” “The Social Dilemma”), “Coded Bias” tackles its sprawling subject by zeroing in empathetically on the human costs."

"Terrifying. Coded Bias takes you to the front lines of the digital revolution."

"‘Coded Bias’ is an eye-opening and important film that calls attention to a movement of resistance led by badass female data scientists and grassroots organizations examining an important civil liberties matter."

"A fascinating study of how even the seemingly impartial world of technology is subject to embedded racism and privilege."

"CODED BIAS isn’t just directed by and centered around a woman. The doc is dominated by women. Expert interviews tend to skew pale and male, especially in STEM docs, but CODED BIAS highlights the voices of women, and particularly women of color, in a rare and welcome change."

"Digs into how these technologies addict us, extract data from us for profit or control, or inadvertently work against already marginalized people."

"A chilling plunge into Orwellian reality."

"A sci-fi thriller dressed up a documentary's clothes, CODED BIAS is one of the most fascinating festival films in a lineup already filled with engrossing options."

"***1/2. CODED BIAS exemplifies the power of free will, which includes our right to learn about something, and the right to shut it down."

"The film is certainly realistic about the possibility of our increasing technological progress moving our society into a dystopia. But Kantayya and Buolamwini also keenly understand that if the dangers of A.I. are understood and addressed, it’s a tool that can ultimately do more good than harm."

"In a year where conversations about racial and criminal justice are more important than ever, Coded Bias‘ broader points about the way the tech industry projects its own gender and racial biases onto its technologies ring particularly true."

"By centering the voices and stories of brilliant women and people of color who have exposed dangerous biases in coding, algorithms, and technologies, CODED BIAS is a much-needed antidote to cultural stories and media that reproduce -- instead of challenge -- the dominance of white male expertise in tech. Everyone needs to see this film, so we can collectively understand the fight for racial justice happening on the new frontiers of code and computer science."

"Coded Bias lays plain so many of the pitfalls of AI and makes the danger impossible to ignore. It is a political, feminist issue."

"Coded Bias is the intersection of social justice and computer science. It wakes us up to the need for a diverse body of programmers to protect us from the technology we have created."

"An impressively extensive documentary on how racism and sexism creep into the unseen algorithms that control our lives, told by women activists who’re fighting the big tech companies that hold the code."

Filmmaker Shalini Kantayya’s feature documentary Coded Bias premiered at the 2020 Sundance Film Festival. She directed the season finale episode for the National Geographic television series Breakthrough, a series profiling trailblazing scientists transforming the future. Executive Produced by Ron Howard, it was broadcast globally in June 2017. Her debut feature film Catching the Sun, about the race for a clean energy future, premiered at the Los Angeles Film Festival and was named a New York Times Critics’ Pick. Catching the Sun released globally on Netflix on Earth Day 2016 with Executive Producer Leonardo DiCaprio, and was nominated for the Environmental Media Association Award for Best Documentary.

Kantayya is a TED Fellow, a William J. Fulbright Scholar, and a finalist for the ABC Disney DGA Directing Program. She is an Associate of the UC Berkeley Graduate School of Journalism. Kantayya finished in the top 10 out of 12,000 filmmakers on Fox’s On the Lot, a show by Steven Spielberg in search of Hollywood’s next great director. (10/20)

Dissecting one of the most influential platforms of the contemporary social media landscape, TIKTOK, BOOM., directed by CODED BIAS filmmaker Shalini Kantayya, examines the algorithmic, socio-political, economic, and cultural influences and impact of the history-making app.
Learn more

Belly of the Beast

Nerdy women - the "hidden half" of fan culture - open up about their lives in the world of conventions, video games, and other rife-with-misogyny pop culture touchstones.
Learn more

In the United States, women are vastly underrepresented in STEM (Science, Technology, Engineering & Math) fields, holding under 25% of STEM jobs and a disproportionately low share of STEM undergraduate degrees. Great Unsung Women of Computing is a series of three remarkable documentary films that show how women revolutionized the computing and Internet technology we use today, inspiring female students to believe that programming careers lie within their grasp. The Computers features the extraordinary story of the ENIAC Programmers, six young women who programmed the world’s first modern, programmable computer, ENIAC, as part of a secret WWII project. They programmed ENIAC without programming language (for none existed), and harnessed its power to perform advanced military calculations at lighting speeds. However, when the ENIAC was unveiled in 1946, the Programmers were never introduced and they became invisible. This stunning documentary features rare footage and never-before-seen interviews with the ENIAC Programmers. 70 years later, this is their story. The Coders tells the story of two extraordinary women, Sarah Allen and Pavni Diwanji whose technologies revolutionized the Internet: Sarah co-invented Flash, the first multimedia platform supporting video, graphics, games and animation for the internet, while Pavni invented the Java servlet to allow web applications to respond quickly to requests from users everywhere. In The Future Makers, Andrea Colaço, a young MIT PhD, shares her dream of a world in which we interact with our smart devices using natural hand gestures, not static keyboards or touchpads. She invented 3D “gestural recognition technology” and co-founded 3dim to develop and market it. In 2013, 3dim won MIT’s $100K Entrepreneurship Prize and launched Andrea towards her dream of innovation and changing the world.
Learn more

Who is a woman and who gets to decide?
Learn more

LIVING THINKERS: AN AUTOBIOGRAPHY OF BLACK WOMEN IN THE IVORY TOWER examines the intersection of race, class and gender for Black women professors and administrators working in U.S. colleges and universities today. Through their diverse narratives, from girlhood to the present, Black women from different disciplines share experiences that have shaped them, including segregated schooling as children, and the trials, disappointments and triumphs encountered in Academia. Though more than 100 years have passed since the doors to higher education opened for Black women, their numbers as faculty members are woefully low and for many still, the image of Black women as intellectuals is incomprehensible. And while overtly expressed racism, sexism and discrimination have declined, their presence is often still often unacknowledged. Through frank and sometimes humorous conversations, this documentary interrogates notions of education for girls and women and the stereotypes and traditions that affect the status of Black women both in and out of the Academy. A perfect companion film for any classroom discussion on the intersection of racism, sexism and/or feminism.
Learn more

"Ursula Biemann’s WRITING DESIRE is a video essay on the new dream screen of the Internet and how it impacts on the global circulation of women’s bodies from the third world to the first world. Although under-age Philippine 'pen pals' and post-Soviet mail-order brides have been part of the transnational exchange of sex in the post-colonial and post-Cold War marketplace of desire before the digital age, the Internet has accelerated these transactions. Biemann provides her viewers with a thoughtful meditation on the obvious political, economic and gender inequalities of these exchanges by simulating the gaze of the Internet shopper looking for the imagined docile, traditional, pre-feminist, but Web-savvy mate. WRITING DESIRE delights in implicating the viewer in the new voyeurism and sexual consumerism of the Web. However, it never fails to challenge pat assumptions about the impossibility for resistance and the absolute victimization of women who dare to venture out of the third world and onto the Internet to look for that very obscure object of desire promised by the men of the West. This film will promote lively discussion on third world women, the sex industry, mail order brides, racism and feminist backlashes in the West, and on women’s sexuality, desire, and new technologies." --Gina Marchetti, Ithaca College
Learn more

Essential viewing for students, educators, counselors, policy makers and parents, THE GENDER CHIP PROJECT is being hailed as an important resource for addressing the disparity of representation of women in the science, technology, engineering and math (STEM) fields. Although women comprise the majority of undergraduates in America, only 20 percent are earning degrees in engineering and computer science. With statistics like these—and controversies such as the firestorm created when a prominent university president suggested women lack innate abilities in math and science—it’s clear that the road to success in the high-stakes STEM professions is not an easy one for young women. THE GENDER CHIP PROJECT illustrates this challenge as it follows five extraordinary women majoring in the sciences, engineering and math at Ohio State University. Meeting regularly throughout their four years of school, they create a community to share their experiences and struggles as women stepping into traditionally male domains, and find support in dialog with their female professors. Now chaptered for easier use, the DVD shows how these extraordinary students are finding their own way to navigate and succeed in these male-dominated areas of study.
Learn more
Shopping Cart