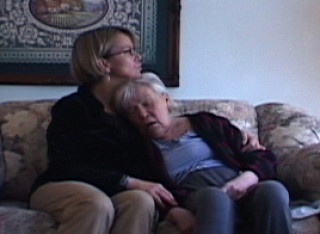 A film by Ann Hedreen and Rustin Thompson

Who are you if you can’t remember who you are? Ann Hedreen’s mother started showing symptoms of Alzheimer’s disease at the barely-old age of 60. Though it started with small signs—forgetting what she was doing and losing her way home—the irreversible disease would change her and her family's lives forever. Emmy-nominated QUICK BROWN FOX combines their moving personal journey with an insightful look at the science and politics of Alzheimer’s—a disease that now affects more than 18 million people worldwide.

Devastated and angry about her mother's decline, Hedreen began an uncompomising pursuit of information about possible causes and cures, volunteering as a long-term test subject at an Alzheimer's research center in Washington and interviewing prominent doctors and researchers to gain insight into the politics of funding and stem-cell research. Interweaving these experiences with Super 8 home movies, 1950s medical films and heartbreaking interviews with her family, Hedreen’s film bravely confronts the disease that has mangled the mind of her once brainy mom, and raises profound questions about the importance of memories in defining ourselves.

"Three and a half Stars. Recommended."

“Highly Recommended. Almost any video collection would benefit from the addition of this film. Anyone with a family member or friend suffering from this disease will find this informative, and those wanting to know more about Alzheimers will not be disappointed. This is an informative, thought provoking video which will linger long in any viewer’s mind.”

"An important film for our parents, for ourselves and for all those who stand in the path of this terrible disease."

“Elegiac, heartbreaking, and unrelentingly honest… the history of a life and a family and not a disease.”

“Imaginatively and beautifully filmed… alternately sad, frightening, humorous and hopeful… shows the value of loving family ties in confronting the thief of memory.”

“Intelligently and articulately put together, with irony and laughter and love."

"QUICK BROWN FOX interrogates memory, loss, identity, and love...[the filmmakers] have with great sensitivity created a film that allows us to perceive and challenge the contemporary cultural fantasy of a stable identity located in an isolated self."

Ann Hedreen is a writer, producer and director. She is the author of the award-winning memoir, "Her Beautiful Brain" (She Writes Press, 2014), which was inspired by Quick Brown Fox: an Alzheimer's Story. Her career has spanned broadcast and print journalism, public affairs and non-profit media strategy and storytelling. Hedreen earned her M.F.A. at Goddard College and her B.A. at Wellesley College. Co-director Rustin Thompson is an independent filmmaker with more than 30 years experience as a director, cinematographer, editor, and writer. He is the author of Get Close: Lean Team Documentary Filmmaking (Oxford University Press, 2019). Thompson is a graduate of the University of Washington. Hedreen and Thompson co-own White Noise Productions, known for its independent documentaries, short films, and Internet-ready media for non-profit clients. Recent feature documentaries include: Zona Intangible, The Church on Dauphine Street, Art Without Walls, and 30 Frames a Second: the WTO in Seattle. Hedreen and Thompson live in Seattle. (07/19)

Rustin Thompson is an independent filmmaker with more than 25 years experience as a director, cameraman, editor, and writer. In addition to making documentaries and short films, he worked for more than ten years as a freelance CBS cameraman and has years of experience shooting in third world locations, including Bangladesh, Haiti, Guatemala, and North Korea. He is also a freelance film critic and host of the alt-country show Roadsongs for Seattle radio station KBCS-FM, 91.3, and is a frequent contributor to Moviemaker magazine. Rustin is a graduate of the University of Washington. (09/09)

Complaints of a Dutiful Daughter

With profound insight and a healthy dose of levity, COMPLAINTS OF A DUTIFUL DAUGHTER chronicles the various stages of a mother's Alzheimer's Disease and the evolution of a daughter's response to the illness. The desire to cure the incurable-to set right her mother's confusion and forgetfulness, to temper her mother's obsessiveness-gives way to an acceptance which is finally liberating for both daughter and mother. Neither depressing nor medical, COMPLAINTS OF A DUTIFUL DAUGHTER is much more than a story about Alzheimer's and family caregiving. It is ultimately a life-affirming exploration of family relations, aging and change, the meaning of memory, and love.
Learn more