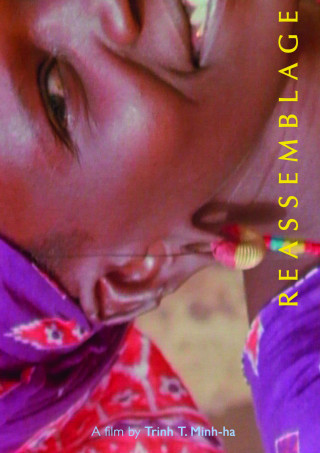 Women are the focus but not the object of Trinh T. Minh-ha’s influential first film, a complex visual study of the women of rural Senegal.

Women are the focus but not the object of Trinh T. Minh-ha’s influential first film, a complex visual study of the women of rural Senegal. Through a complicity of interaction between film and spectator, REASSEMBLAGE reflects on documentary filmmaking and the ethnographic representation of cultures.

“With uncanny eloquence, REASSEMBLAGE distills sounds and images of Senegalese villagers and their surroundings to reconsider the premises and methods of ethnographic filmmaking. By disjunctive editing and a probing narration this ‘documentary’ strikingly counterpoints the authoritative stance typical of the National Geographic approach.” — Laura Thielan

“Superbly crafted and visually exquisite, Reassemblage is also a work of film criticism—one that plays with the qualities of film itself. In its form and content, it critiques both western science and documentary traditions.”

The recipient of numerous awards and grants (including the 2014 Wild Dreamer Lifetime Achievement Award from the Subversive Festival in Zagreb, Croatia; the 2012 Women's Caucus for Art Lifetime Achievement Award; the "Trailblazers" Award at MIPDOC, Cannes; AFI National Independent Filmmaker Maya Deren Award, fellowships from the Guggenheim Foundation, the National Endowment of the Arts, the Rockefeller Foundation, the American Film Institute, The Japan Foundation, and the California Arts Council), her films have been given over forty eight retrospectives in Argentina, Croatia, Columbia, Mexico, Finland, Brazil, Canada, Italy, Korea, Spain, the Netherlands, Slovenia, France, Germany, Switzerland, Austria, Japan, India, Taiwan, Hong Kong, Australia, the UK, the US, and were exhibited at the international contemporary art exhibition Documenta 11 (2002) in Germany. They have shown widely in the States, in Canada, Senegal, Australia, and New Zealand, as well as in Europe and Asia (including in Italy, Belgium, Spain, Sweden, Finland, Japan, India, Taiwan, Jerusalem. REASSSEMBLAGE was initially exhibited at The New York Film Festival (1983) and had toured the country with the Asian American Film Festival among numerous other festivals. NAKED SPACES received the Blue Ribbon Award for Best Experimental Feature at the American Int'l. Film Festival and the Golden Athena Award for Best Feature Documentary at the Athens International Film Festival in 1986; it toured nationally and internationally with the 1987 Biennial of the Whitney Museum of American Art. SURNAME VIET GIVEN NAME NAM has received the Merit Award from the Bombay International Film Festival, the Film as Art Award from the Society for the Encouragement of Contemporary Art (SF Museum of Modern Art) and the Blue Ribbon Award at the American Film and Video Festival. SHOOT FOR THE CONTENTS won the Jury's Best Cinematography Award at the 1992 Sundance Film Festival and the Best Feature Documentary Award at the Athens International Film Festival, and toured internationally with the 1993 Biennale of the Whitney Museum. A TALE OF LOVE showed internationally in over twenty-four film festivals, including Berlin and Toronto. THE FOURTH DIMENSION (Locarno, Viennale, Edinburg, London) and NIGHT PASSAGE continue to exhibit widely (UK, Austria, Spain, Japan, Korea, Shanghai).

Trinh Minh-ha has traveled and lectured extensively - in the States, as well as in Europe, Asia, Australia and New Zealand - on film, art, feminism, and cultural politics. She taught at the National Conservatory of Music in Dakar, Senegal (1977-80); at universities such as Cornell, San Francisco State, Smith, and Harvard, Ochanomizu (Tokyo), Ritsumeikan (Kyoto), Dongguk (Seoul); and is Professor of Gender & Women's Studies and of Rhetoric at the University of California, Berkeley. (11/19)

Jean-Paul Bourdier is a French born photographer of unique style, skilled passion and compelling imagination. His images balance across the nexus of multiple crafts – among them painting, poetry, and performance art. He is the author of "Leap into the Blue," and "Bodyscapes," (co -authored by Trinh T. Minh), and has won the Guggenheim, American Council of Learned Societies, NEA, Graham, UC President’s Humanities and Getty awards. He is also a Professor of Architecture, Photography and Visual Studies at UC Berkeley and has worked as a production designer for seven films, co - directing two with Trinh Minh. Bourdier. (01/20)

Made in homage to Kenji Miyazawa’s children’s sci-fi classic MILKY WAY RAILROAD, NIGHT PASSAGE is an experimental feature from celebrated filmmaker Trinh T. Minh-ha and artist Jean Paul Bourdier (REASSEMBLAGE, THE FOURTH DIMENSION, A TALE OF LOVE, SHOOT FOR THE CONTENTS, SURNAME VIET GIVEN NAME NAM). This provocative digital tale tells the story of three young friends traveling for a brief moment together on the train between life and death. Their journey into and out of the land of ‘awakened dreams’ occurs on a long ride on a night train. Ingeniously framed through the train window, filmmaker Trinh T. Minh-ha and artist Jean Paul Bourdier create whimsical and sensual dreamscapes, which is matched by an equally beautiful and other-worldly music score. Once again, Minh-ha shifts the way she engages with the form and the spirit of the cinema—to challenge and provoke her audience.
Learn more

One of the myths surrounding the creation of Vietnam involves a fight between two dragons whose intertwined bodies fell into the South China Sea and formed Vietnam’s curving S-shaped coastline. Influential feminist theorist and filmmaker Trinh T. Minh-ha’s lyrical film essay commemorating the 40th anniversary of the end of the war draws inspiration from ancient legend and from water as a force evoked in every aspect of Vietnamese culture. Minh-ha’s classic Surname Viet Given Name Nam (1989) used no original footage shot in the country; in Forgetting Vietnam images of contemporary life unfold as a dialogue between land and water—the elements that form the term "country." Fragments of text and song evoke the echoes and traces of a trauma of international proportions. The encounter between the ancient as related to the solid earth, and the new as related to the liquid changes in a time of rapid globalization, creates a third space of historical and cultural re-memory—what local inhabitants, immigrants and veterans remember of yesterday’s stories to comment on today’s events.
Learn more

Shot with stunning elegance and clarity, NAKED SPACES explores the rhythm and ritual of life in the rural environments of six West African countries (Mauritania, Mali, Burkino Faso, Togo, Benin and Senegal). The nonlinear structure of NAKED SPACES challenges the traditions of ethnographic filmmaking, while sensuous sights and sounds lead the viewer on a poetic journey to the most inaccessible parts of the African continent: the private interaction of people in their living spaces.
Learn more

A Tale of Love

Portraying the Vietnamese immigrant experience through Kieu, A TALE OF LOVE follows the quest of a woman in love with ‘Love’. The film is loosely inspired by THE TALE OF KIEU, the Vietnamese national poem of love which Vietnamese people see as a mythical biography of their ‘motherland,’ marked by internal turbulence and foreign domination. A free-lance writer, Kieu also works as a model for a photographer who idealizes the headless female body and who captures Kieu sheathed by transparent veils. Voyeurism runs through the history of love narratives and voyeurism is here one of the threads that structures the ‘narrative’ of the film. Exposing the fiction of love in love stories and the process of consumption, A TALE OF LOVE marginalizes traditional narrative conventions and opens up a denaturalized space of acting where performed reality, memory and dream constantly pass into one another. Sublimely beautiful to watch, A TALE OF LOVE eloquently evokes an understanding of the allusive and powerful connections between love, sensuality, voyeurism and identity.
Learn more

Shoot for the Contents

Reflecting on Mao’s famous saying, “Let a hundred flowers blossom and a hundred schools of thought contend,” Trinh T. Minh-ha’s film—whose title refers in part to a Chinese guessing game—is a unique excursion into the maze of allegorical naming and storytelling in China. The film ponders questions of power and change, politics and culture, as refracted by Tiananmen Square events. It offers at the same time an inquiry into the creative process of filmmaking, intricately layering Chinese popular songs and classical music, the sayings of Mao and Confucius, women’s voices and the words of artists, philosophers and other cultural workers. Video images emulate the gestures of calligraphy and contrast with film footage of rural China and stylized interviews. Like traditional Chinese opera, Trinh’s film unfolds through “bold omissions and minute depictions” to render “the real in the illusory and the illusory in the real.” Exploring color, rhythm and the changing relationship between ear and eye, this meditative documentary realizes on screen the shifts of interpretation in contemporary Chinese culture and politics.
Learn more

Acclaimed filmmaker Trinh T. Minh-ha ventures into the digital realm with her stunning feature, THE FOURTH DIMENSION, an incisive and insightful examination of Japan through its art, culture, and social rituals. As is the case with Trinh's previous films, her film is a multi-layered work addressing issues around its central theme: the experience of time, the impossibility of truly "seeing," and the impact of video on image-making. THE FOURTH DIMENSION is an elegant meditation on time, travel, and ceremony in the form of a journey. In her first foray into digital video, Minh-ha deconstructs the role of ritual in mediating between the past and the present. She explains, "Shown in their widespread functions and manifestations, including more evident loci such as festivals, religious rite and theatrical performance, 'rituals' involve not only the regularity in the structure of everyday life, but also the dynamic agents in the world of meaning." With its lush imagery, Minh-ha's Japan is viewed through mobile frames, with doors and windows sliding shut, revealing new vistas as it blocks out the old light. “Trinh T. Minh-ha’s newest essayistic work and her first videotape, cuts an intricate key for unlocking this elusive culture. Her tack finds great visual pleasure in the everyday, composing and decomposing the social landscape, while constructing a poetic grid of temporalities, symbolic meaning, and ritual. In THE FOURTH DIMENSION, Trinh’s lyrical narration guides us through ‘Japan’s likeness,’ the perfected framing of the sacramental familiar.” - Steve Seid
Learn more

In this acclaimed, hauntingly beautiful film, director Aliona van der Horst follows the unconventional Japanese-Dutch pianist Tomoko Mukaiyama as she explores the miracle of fertility and the cycle of life—sometimes joyful, sometimes tragic. When Mukaiyama recognized that her childbearing years were ending, she created a multimedia art project on the subject in a village in Japan, constructing what she calls a cathedral, out of 12,000 white silk dresses. While Mukaiyama’s own mesmerizing music provides a haunting backdrop to the film, her installation elicits confessions from its normally reticent Japanese visitors, many of whom have never seen art before—and in moving scenes they open up about previously taboo subjects. Mukaiyama’s courageous approach to a subject that remains unspoken in many cultures is explored with an elegance and sophistication that deepens our understanding of the relationship between body and mind.
Learn more
Shopping Cart