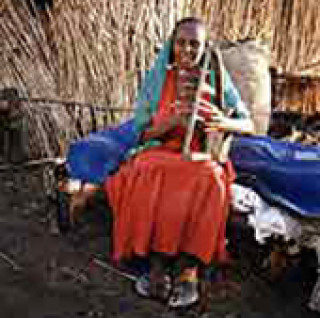 A film by Salem Mekuria

During the past two decades, more than two million refugees have left Ethiopia. Famine, poverty and political strife as well as the religious persecution caused by Eritrea’s annexation have already cost countless lives. Narrated by Salem Mekuria, an Ethiopian filmmaker in the US, this lucid documentary presents the life stories of three women refugees in neighboring Sudan. It traces the attempts of individual women to survive displacement, resettlement camps and ineffectual bureaucracy. An astute, politically sophisticated analysis of social and economic crisis from the perspective of Third World women.

“Exemplary in its depiction of the plight of refugee women. It is time that they tell their own stories.”

She is currently working on the last installment of Square Stories: A Trilogy, and a feature documentary, Awra Amba's Utopia. (7/19)

As I Remember It

This intimate portrait of writer Dorothy West explores the forgotten role of women in the Harlem Renaissance. From the perspective of her 83 years, the still active writer relates her memories of growing up African American, privileged and enthralled by literature. Archival footage and photographs, interviews and excerpts from her autobiographical novel, THE LIVING IS EASY, capture West's fascinating story.
Learn more

Since 2006 when Europe closed its borders, human trafficking has burgeoned in Egypt’s Sinai Desert, where Eritrean asylum seekers and refugees heading north to Israel are kidnapped, held hostage, and tortured by Bedouin smugglers demanding exorbitant ransoms for their freedom. Fleeing an oppressive military dictatorship at home, with a “shoot-to-kill” policy at the border and where only pregnant women are exempted from service, over 300,000 Eritreans have fled their homeland in North Africa. Many of these men, women and children die in Sinai’s torture camps. This powerful documentary intimately follows Swedish-Eritrean journalist Meron Estefanos and her efforts to aid the hostages and their families. From Stockholm she runs a popular online radio show, fielding calls for help from Eritrean victims and their relatives. Her activism takes her to Israel and Egypt’s Sinai Desert to seek the release of a badly abused young woman held captive with her baby and to search for another who disappeared along the Egyptian-Israeli border after her ransom had been paid. Both eloquent and harrowing, SOUND OF TORTURE spotlights one of today’s most underreported human rights violations and the one woman who is making it her mission to create change.
Learn more