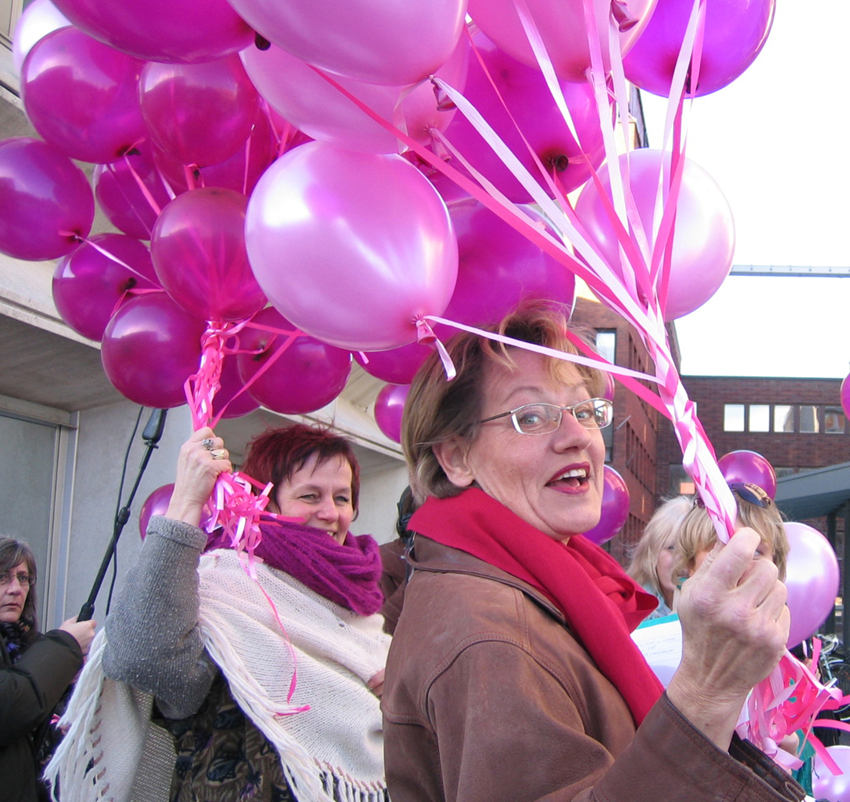 A film by Liv Weisberg

The Feminist Initiative reveals the passion, pitfalls and promise of a diverse group of women working to establish the world’s first feminist political party in Sweden in the spring of 2005. Even in one of the most gender-equal societies in the world, the advancement of women’s agenda within the patriarchal establishment requires a revolution. Beginning from the innovative and inclusive decision to elect three party leaders rather than one, the film charts every trail-blazing step (and misstep) of the Feminist Initiative (F!) from their energetic start to the climactic moments of their inspiring, celebrity-supported rally.

In the face of internal discord, public backlash, and a worrisome lack of funds, the Feminist Initiative forges a new path towards parliament, raising critical questions along the way about what women really want from their government and about gender differences in leadership. This is an invaluable story about the struggle to have women’s voices heard in a patriarchal, modern society, and an amazing behind-the-scenes film about what women do with power, and what power can do to women.

“An inspiring, educational journey…. Despite the odds against electoral success and hostility they encounter, these women remain positive and determined—feminists who dream that ‘if you build it, they will come’...eventually.”

“Compelling story of the need for ongoing feminist activism…. Reveals not only their achievements, but also the magnitude of opposition to gender equity and the power of media to perpetuate the status quo.”

"I recommend the film for classroom use—in women’s studies, international studies, political science, and sociology - but individual viewers also will find the film instructive and inspiring."

“Three and a half Stars. This inside look at the growing pains of a new political movement is dramatic and compelling… highly recommended.”

“An excellent film for Women’s Studies and Political Science, especially students of social movements and third parties… Captures the essence of the movement towards real democracy. I highly recommend this film and I will be rooting for F! in the future!”

Liv Weisberg is a young documentary filmmaker based in Stockholm, Sweden. She started her career at 18 when she made a film about a journey she took with her grandfather to the concentration camps where he was a Nazi prisoner for five years during the Second World War.

She was brought up in a ‘70s collective by her Swedish mother and American father. Social awareness was often discussed and Liv developed a passion for justice. Her first films dealt with social issues, such as the problems of integration and racism in Sweden.

The idea for the film The Feminist Initiative came about in a public discussion about the fact that even though Sweden is one of the most gender-equal countries in the world, there are still urgent problems to be solved such as rape, violence against women, and lower pay. Liv Weisberg wanted to follow the women who took on this battle for equality.

Documentaries have always been a big part of Liv´s life, as her father Ted Weisberg worked with video all through her childhood. The camera was always close by and became a tool with which she could describe her world.

Perhaps her strongest drive is her curiosity. That is why her filmography covers such a broad range of topics, from the Holocaust, to racism, and even life in Hollywood.

Today Liv Weisberg is an established filmmaker in Sweden, with films being broadcast on TV and shown at festivals throughout the country. (8/14)

The Tunisian Revolution sparked the Arab Spring. But revolution was the easy part—as two women learned on the journey from protest to functioning government. Emna Ben Jemaa and Jawhara Ettis represent opposite sides of their country’s politics: One is a well-known journalist in the city, fighting for free speech. The other is a strict Islamist from a rural town, elected to help draft the new constitution. Despite their differences, both face the threat of extremists hijacking their fragile political process, and both Emna and Jawhara have to make difficult choices to balance their public political roles with their domestic environment. The film is a gripping and surprising perspective on the clash between Islam and secularism, and the political role of women in the Arab world. Offering an insightful portrait of the messy work of democracy, A REVOLUTION IN FOUR SEASONS is especially poignant in this global era of divided politics.
Learn more
Shopping Cart