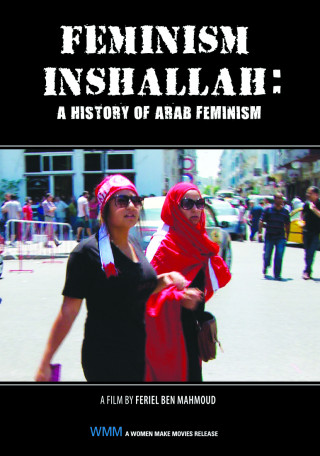 A film by Feriel Ben Mahmoud

The struggle for Muslim women’s emancipation is often portrayed stereotypically as a showdown between Western and Islamic values, but Arab feminism has existed for more than a century. This groundbreaking documentary recounts Arab feminism’s largely unknown story, from its taboo-shattering birth in Egypt by feminist pioneers up through viral Internet campaigns by today’s tech-savvy young activists during the Arab Spring. Moving from Tunisia to Egypt, Algeria, Morocco, Lebanon and Saudi Arabia, filmmaker and author Feriel Ben Mahmoud tracks the progress of Arab women in their long march to assert their full rights and achieve empowerment. Featuring previously unreleased archival footage and exclusive multigenerational interviews, FEMINISM INSHALLAH is an indispensable resource for Women’s Studies, Global Feminism, Middle East and Islamic Studies.

"Makes an invaluable intervention in contemporary debates on feminism by shattering the monolithic ways in which the “Muslim woman” is often framed."

They Call Me Muslim

In popular Western imagination, a Muslim woman in a veil – or hijab – is a symbol of Islamic oppression. But what does it mean for women’s freedom when a democratic country forbids the wearing of the veil? In this provocative documentary, filmmaker Diana Ferrero portrays the struggle of two women – one in France and one in Iran – to express themselves freely. In 2004, the French government instituted an "anti-veil law," forbidding Muslim girls from wearing the hijab to school. Samah, a teenager in Paris who, at 14 decided to wear the veil, explains how the law attacks her sense of identity – and does not make her feel liberated. “Who says that freedom is not wearing anything on your head?” she asks. Half a world away in Tehran, “K,” forced to wear the hijab by the Islamic regime, defiantly wears it her own way – and her translucent scarf loosely draped over her hair puts her at risk of arrest. When Ferrero films her at home, K, comfortable in a tank top and shorts, says, “They call me Muslim... But do you see me as a Muslim? What do you have in your mind for a Muslim person?” Beautifully shot and finely crafted, THEY CALL ME MUSLIM highlights how women still must struggle for the right to control their own bodies – not only under theocratic regimes, but also in secular, democratic countries where increasing discrimination against Muslims and sexism intersect.
Learn more

By returning to the roots of Islam and understanding how societies have found justification for their treatment of women within Islamic sources, this thoughtful and far reaching film is an essential resource that debunks myths about women and Islam. Renowned Muslim feminist scholars and journalists, including Asra Q. Nomani, Mona Eltahawy, Azadeh Moaveni, Dr. Amina Wadud, Dr. Khaled Abou El Fadl and Asma Gull Hasan, detail how from early on very different understandings of the Qur’an lead to vastly different translations, with enormous repercussions for women living in different Islamic societies around the world. The film alternates between the history of Mohammad and issues facing Muslim women today—from the wearing of the veil, to praying in the mosque, and attitudes towards domestic violence and honor killings. It also looks at how feminism works within Islam in the modern era. RIGHTS & WRONGS is indispensable for courses on Islamic and Middle Eastern studies, comparative religion, women’s studies and more.
Learn more

As political conflict and change sweep the Arab world, CASABLANCA CALLING highlights a quiet social revolution under way in Morocco, where 60% of the women have never attended school. For the first time, Moroccan women are trained and employed as official Muslim leaders or morchidat. Charged with teaching an Islam based on tolerance, compassion and equality, they provide vital support and guidance to communities, especially to girls and women. At the film’s heart are Hannane, Bouchra and Karima, three morchidat assigned to mosques in different parts of Morocco. CASABLANCA CALLING follows them for a year on rounds to schools and other sites to provide advice on marriage and employment; champion education for girls and women; caution against early marriage; and help resolve personal problems. Offering unique access to a story we rarely see, this illuminating documentary demonstrates how women’s empowerment through moderate Islam is transforming a nation.
Learn more

As the forces of ISIS and Assad tear through villages and society in Syria and Northern Iraq, a group of brave and idealistic women are taking up arms against them—and winning inspiring victories. Members of “The Free Women’s Party” come from Paris, Turkish Kurdistan, and other parts of the world. Their dream: To create a Democratic Syria, and a society based on gender equality. Guns in hand, these women are carrying on a movement with roots that run 40 years deep in the Kurdish Workers’ Party (PKK) in Turkey. GIRL’S WAR honors the legacy of Sakine Cansiz, co-founder of the PKK who was assassinated in Paris in 2013, and reflects on the sacrifices made by all of the women in the movement, who have endured jail, rape, war, and persecution in their quest to liberate their lives and sisters from male dominance. With scenes of solidarity, strength, and love amongst these brave women soldiers, GIRL'S WAR is a surprising story of Middle Eastern feminism on the front lines.
Learn more