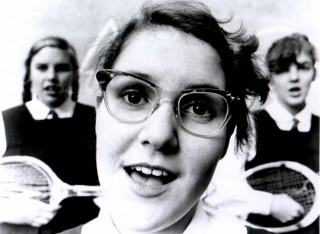 The Films of Jane Campion

The internationally acclaimed director of THE PIANO, AN ANGEL AT MY TABLE and SWEETIE first displayed her visual flair and dark humor in these award-winning shorts. The compilation includes:

A GIRL'S OWN STORY is about Beatlemania, the sixties and growing up. Some stories about girlhood: where family is strange, adutlhood lonely, and innocence perverse.

PASSIONLESS MOMENTS is a series of wry vignettes: Sean and Arnold Not Speaking; Scotties, Part of the Grand Design of the Universe; Angela Eats Meats, Ironing on Sunday; and others...

PEEL takes place on a hot Australian summer's day, a recalcitrant, freckled, red-headed family of three go on a Sunday drive in the country. Their outing results in an intrigue of awesome belligerence. Winner of the Palme d'Or at the Cannes Film Festival.

"A beautifully photographed, sharply drawn drama...A lovely debut which will be compared to Jane Campion's later work but will certainly live up to the comparison."

"These deceptively fragile-looking and tough-minded short films reveal familiar power plays from multiple points of view, punctuated by telling close-ups. A promising young director's take on the origins of narrative."

New Zealand director, producer and screenwriter Jane Campion is one of cinema’s most notable filmmakers. She is the first woman to receive two Oscar nominations for Best Director – the first of which was in 1994 for THE PIANO, and the second of which she also won in 2022 for THE POWER OF THE DOG. She was also the first woman director to receive the coveted Palme d’or at Cannes for THE PIANO in 1993 and went on to win Best Screenplay. In 2021, she was honored with the prestigious Prix Lumière Award at the Lumière Film Festival in Lyon, France.

Jane studied anthropology at Victoria University in Wellington and then painting at London’s Chelsea School of Arts and the Sydney College of the Arts before moving to film in the early 1980s, while studying at the Australian Film and Television School. Her first short film, PEEL (1982), winner of the Short Film Palme d’or in 1986 in Cannes, was followed in 1989 by SWEETIE, her first feature film, and, a year later, by AN ANGEL AT MY TABLE about New Zealand author Janet Frame. Subsequent to the multi-award-winning THE PIANO were THE PORTRAIT OF A LADY (1996); HOLY SMOKE (1999), currently being adapted for the stage; IN THE CUT (2003) and BRIGHT STAR presented in Competition at Cannes, in 2009. Campion has recently won remarkable public and critical acclaim with a television series, TOP OF THE LAKE. (03/22)

A confronting and realistic short drama by Academy Award-winning director, Jane Campion, about sexual harassment in the office. A young office worker alleges her boss sexually harassed her when she worked late at his request. She loses her job as a result of the claim. The investigator for the case finds it difficult to gather evidence from the tight-lipped and uncooperative office workers. Delicately drawn, AFTER HOURS raises important questions about discrimination, sexual harassment, gender relations and the interpretation of events.
Learn more

The filmmaker's sister, Jane Campion, journeys home to New Zealand to audition her onetime actress mother for a small role as a schoolteacher in her film adaptation of Janet Frame's autobiographies, AN ANGEL AT MY TABLE. The mother is somewhat resistant to the role, the camera and what she perceives as her daughter's manipulation. The daughter has her own resistance-to her mother's dark vision of the world. This deceptively simple drama, filmed with elegance and restraint, reveals nuances of mother/daughter roles while challenging the realist aesthetic.
Learn more
Shopping Cart