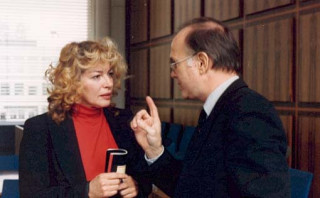 The Germans and Their Men

A film by Helke Sander

"If a woman doesn't have equal rights, is she equally responsible for the crimes of a nation?" Helke Sander's quasi-documentary turns a wry and revealing lens on German masculinity and national identity. This powerful critique offers popular sentiments and startling insights with biting wit and clarity, making provocative connections between feminism, fascism and the legacy of sexism in German history. Produced for ZDF (German television). "Still the best female helmer on the scene in Germany, Helke Sander takes her time between productions to pour as much personal philosophical reflection into her films as possible." -Variety

"An incisive and wonderfully funny exposé."

"A worthwhile film for those wanting a fix on Germany's ruling male elite. Recommended."

Born in Berlin, Sander attended school in Remscheid and drama school in Hamburg (1957/58). Sander married a Finnish author Markku Lahtela in 1959 and had a son, Silvio, before moving to Helsinki, where she directer directed and performed in Ernst Toller's play "Der deutsche Hinkemann" three or four times a week, as well as a production of Grass' "Noch zehn Minuten bis Buffalo." If that weren't enough she also taught classes on drama and improvisation. In 1964, she worked as a director for Finnish TV, but when she returned to Germany the following year, she couldn't find work. So, she began her studies at the Deutsche Film- und Fernsehakademie in Berlin (Berlin film and Television Academy), becoming one of its first graduates. Active in the students' movement, Sander founded the "Aktionsrat zur Befreiung der Frau" in 1968 and spoke at the SDS (Socialist German Students)-conference in Frankfurt, where she stressed that women are only accepted when they adapt - not only in society as a whole, but in the students' movement too.
Her speech is often considered the beginning of the New German Women's Movement.
She co-founded the women's group "Brot und Rosen" in 1972 and the journal Frauen und Film in 1974, which became the first European feminist film journal. Sander was the journal's editor until 1981.
Her first feature-length movie Redupers (Die allseitig reduzierte Persönlichkeit - Redupers) appeared in 1977. Although most of Sander's films emphasize the role of women, The Subjective Factor (1980/81) deals with the beginning of the New Women's Movement. Love is the Beginning of all Terrors (Der Beginn aller Schrecken ist die Liebe) (1984) is a satire on sexual politics.
Now, Sander has produced many short films and documentaries and also works for German TV. Since 1981, she's been a professor at the Hochschule für bildende Künste in Hamburg. She writes for the taz Berlin and for Frauen und Film, and lives in Hamburg and Berlin. (09/09)

Eve discovers the rapture of the apple and offers it to Adam thus committing the original sin. Told in studio-bound cartoon style, this tale serves as an allegory for the plight of the contemporary male/female relationship. Part of the SEVEN WOMEN-SEVEN SINS series which answers the question, " What constitutes a deadly sin in this day and age, and how do you approach such a subject?" Seven of the world’s best-known women directors produce their own version of celluloid sin in this omnibus film.
Learn more

After spending nearly a decade as a journalist documenting young women sold as slaves into the sex trade, award winning filmmaker Mimi Chakarova (THE PRICE OF SEX) sets out on a journey across the United States to explore how men feel about women and love. Piecing together a rich tapestry of vignettes, woven from stories shared by men of different races, ages, and socio-economic backgrounds, Chakarova weaves a stunningly honest and unapologetic portrayal of masculinity in America. With a diverse set of subjects from tiny blues bars of the Deep South to hedge funds of Manhattan and from ranchers in New Mexico to farmers in the Midwest, MEN: A LOVE STORY is a poignant and at times unforgettable dark comedy that reveals a deeper multilayered understanding of maleness, sexuality and gender performance in America today.
Learn more
Shopping Cart