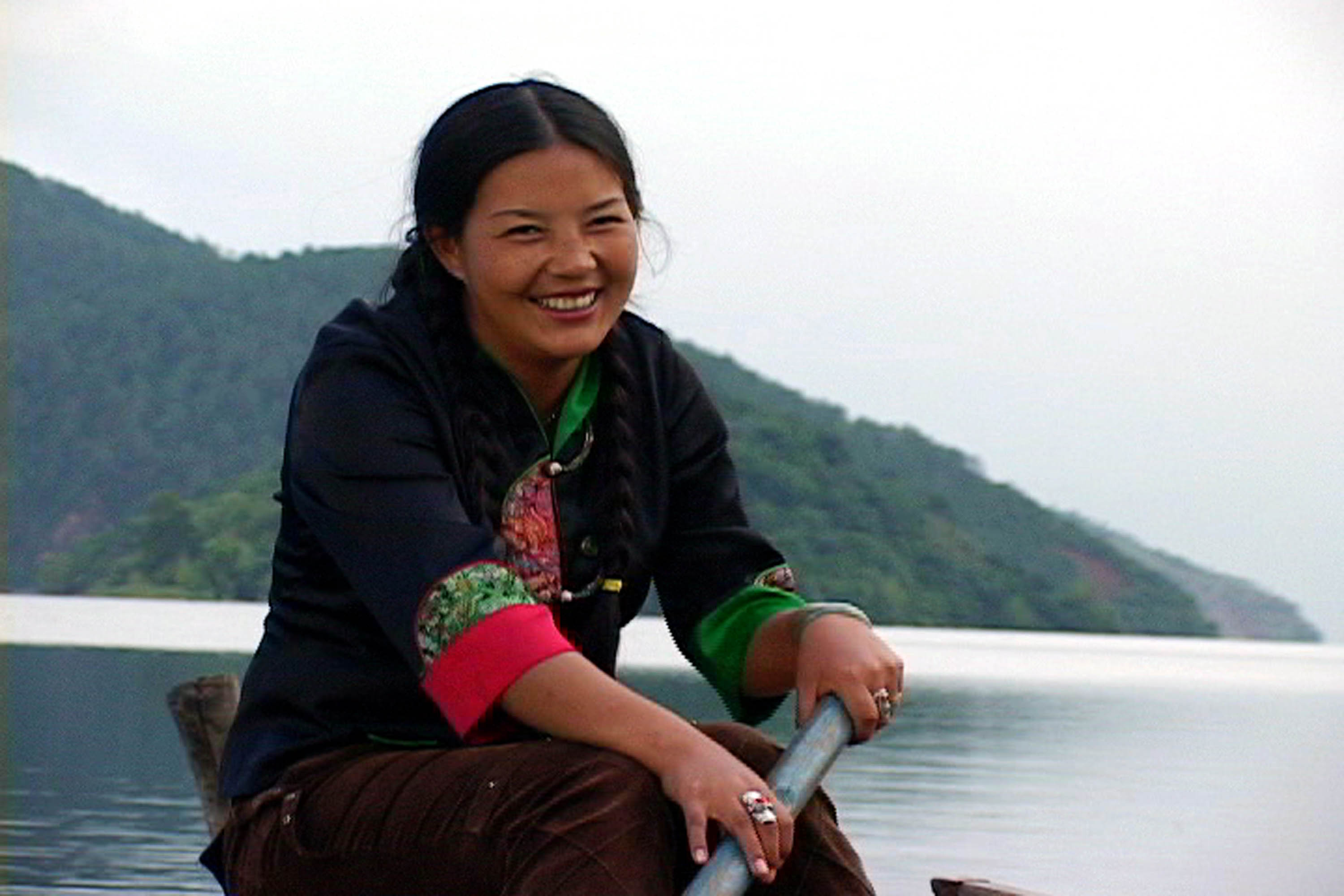 Keepers of one of the last matriarchal societies in the world, Mosuo women in a remote area of southwest China live beyond the strictures of mainstream Chinese culture – enjoying great freedoms and carrying heavy responsibilities.

Beautifully shot and featuring intimate interviews, this short documentary offers a rare glimpse into a society virtually unheard of 10 years ago and now often misrepresented in the media. Mosuo women control their own finances and do not marry or live with partners; they practice what they call "walking marriage." A man may be invited into a woman’s hut to spend a "sweet night," but must leave by daybreak. While tourism has brought wealth and 21st century conveniences to this remote area, it has also introduced difficult challenges to the Mosuo culture – from pollution in the lake, to the establishment of brothels, to mainstream ideas about women, beauty and family. This finely wrought film is a sensitive portrayal of extraordinary women struggling to hold on to their extraordinary society.

“A lovely film about a rural culture challenging the assumptions of mainstream Chinese society.”

“3 ½ stars. Highly Recommended. Sophisticated… does a fine job of presenting an overview of a fascinating and complex culture.”

Xiaoli Zhou is an award-winning documentary filmmaker and instructor at University of Chicago Laboratory Schools with a strong journalism background. As a native Chinese and a graduate of UC Berkeley’s Graduate School of Journalism, Zhou specializes in international reporting and making documentaries about Asian cultures.
Zhou’s work has aired on The Discovery Channel, PBS and Al Jazeera, among others. Her documentaries have screened at various film festivals around the world. For the past few years, she has been honored by the Foreign Press Association, American Women in Radio and Television, Asian American Journalists Association and Academy of Television Arts and Sciences.

The documentary short Utopia 3: The World’s Largest Shopping Mall produced by Zhou has premiered in the 2009 Sundance Film Festival.

Most recently, Zhou has co-produced and co-directed The Colony about the Chinese in Africa with her husband Brent E. Huffman for Al Jazeera. Zhou also translated former Vice President Al Gore’s global warming presentation, featured in the documentary film An Inconvenient Truth, for a Chinese audience. (8/14)

Brent E. Huffman is an award-winning director, writer, and cinematographer of documentaries and television programs. His work ranges from documentaries aired on The Discovery Channel, The National Geographic Channel, NBC, CNN, PBS and Al Jazeera, to Sundance Film Festival premieres, to films made for the China Exploration and Research Society. He has also directed, produced, shot and edited short documentaries for online outlets like TIME, Salon, Huffington Post and PBS Arts.

Huffman has been making social issue documentaries and environmental films for more than a decade in Asia, Africa and the Middle East. These films have gone on to win numerous awards including a Primetime Emmy, Best Conservation Film-Jackson Hole, Best Documentary-Fresno, three Cine Golden Eagle Awards, a College Emmy, a Student Academy Award and a Grand Jury Award at AFI's SILVERDOCS.

Huffman was also an editor of Julia Reichert’s and Steven Bognar’s Primetime Emmy winning PBS documentary series A LION IN THE HOUSE, about children battling cancer.

Huffman is also a writer whose work has been featured in CNN, The Asia Society, Tricycle Magazine, Bust Magazine, The Wilson Quarterly, FRONTLINE and The China Digital Times. He recently completed a book about his experiences in China called "Life in the Heart of China: Diary from a Forbidden World."

In 2009, Huffman covered Vortex 2, the world's largest tornado research project for NBC and The Weather Channel. Most recently, he completed the award-winning documentary THE COLONY for Al Jazeera about China in Africa. He is currently working on a new documentary about the race to save an ancient Buddhist city in Logar province, Afghanistan. (8/14)

In a critical examination of changing concepts of beauty and sexuality in modern China, WOMAN BEING illustrates how a flood of Western pop culture is adversely affecting women's expectations and self-worth. Revisiting her hometown Chengdu after a long absence,filmmaker Wen-Jie Qin traces the impact of a newly booming beauty industry in a country where thirty years ago women were beat up for wearing makeup. Combining interviews and footage from glamour photo studios and television, WOMAN BEING explores the rise of a new super-feminine, highly sexualized ideal. "This hard-nosed look at women in contemporary China makes a persuasive case for how the economies of pleasure, beauty, and consumption are transacted through exploiting women's bodies and images. It provides a sobering prognosis of what 'freedom' might mean for women in China today." - Marina Heung, Baruch College, CUNY
Learn more

In feudal China, women, usually with bound feet, were denied educational opportunities and condemned to social isolation. But in Jian-yong county in Hunan province, peasant women miraculously developed a separate written language, called Nu Shu, meaning "female writing." Believing women to be inferior, men disregarded this new script, and it remained unknown for centuries. It wasn't until the 1960s that Nu Shu caught the attention of Chinese authorities, who suspected that this peculiar writing was a secret code for international espionage. Today, interest in this secret script continues to grow, as evidenced by the wide critical acclaim of Lisa See’s recent novel, Snow Flower and the Secret Fan, about Nu Shu. NU SHU: A HIDDEN LANGUAGE OF WOMEN IN CHINA is a thoroughly engrossing documentary that revolves around the filmmaker's discovery of eighty-six-year-old Huan-yi Yang, the only living resident of the Nu Shu area still able to read and write Nu Shu. Exploring Nu Shu customs and their role in women's lives, the film uncovers a women's subculture born of resistance to male dominance, finds a parallel struggle in the resistance of Yao minorities to Confucian Han Chinese culture, and traces Nu Shu's origins to some distinctly Yao customs that fostered women's creativity.
Learn more
Shopping Cart