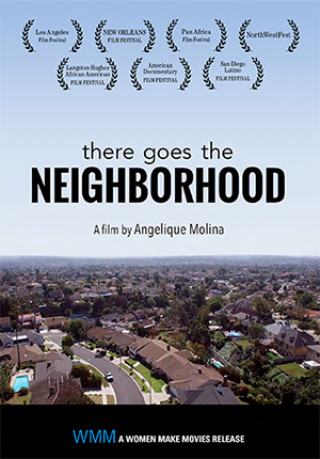 A film by Angelique Molina

THERE GOES THE NEIGHBORHOOD intimately follows an extended Black family of View Park-Windsor Hills, California as they experience changes due to gentrification and reflect on their shifting community.

THERE GOES THE NEIGHBORHOOD intimately follows an extended Black family of View Park-Windsor Hills, California as they experience changes due to gentrification and reflect on their shifting community.

View Park-Windsor Hills is the largest Black middle-class neighborhood in the country. Adele Cadres is a longtime resident and mother of three who gives us insight into the history of the neighborhood. Her eldest daughter Ayana Cadres raises her biracial children with the hopes that they foster the utmost respect and reverence for the Black community she grew up in. Adele’s youngest daughter, Aida, struggles to find an affordable home in the neighborhood due to increasing property value. As the family and other residents reflect on the history and culture of their neighborhood, they debate the issues of maintaining a changing community.

As the national conversation about the housing crisis continues and more and more people are being priced out of the market, THERE GOES THE NEIGHBORHOOD provides intimate access to the families most affected by this growing issue.

"The film was masterfully directed, beautifully shot, and left me as an audience member filled with empathy, curiosity, and perhaps most importantly, humility."

Angelique, an LA native, spent her time as an undergraduate student studying Child and Adolescent Development at San Francisco State University. Upon graduating, she dedicated much of her time to a local art collective and photography classes. Inspired by visual storytelling, she moved back to Los Angeles to pursue a career in filmmaking. After working as a production and camera assistant she to applied to the University of Southern California, where she studied to become a cinematographer and director. While attending USC she shot and directed multiple short films ranging from the documentary HOMEGIRLS to the Student Academy Award nominated, fictional drama, AMELIA'S CLOSET. She is currently working on extending her short film THERE GOES THE NEIGHBORHOOD into a television docuseries. (5/19)

While busing may be a rapidly fading memory in most American schools, it continues to be a reality for more than 3,000 Boston students every year. FAR FROM HOME spotlights Kandice, an insightful, precocious African-American teenager participating in METCO, a voluntary Boston school integration program. Since kindergarten, she has risen before dawn each day to be bused to Weston, an affluent, predominantly white suburb. Now in her last two years of high school, she takes us inside her personal triumphs and daily negotiations: serving as the first black class president, playing the college admissions game, defying stereotypes she feels from white society, living up to her family’s tradition of activism. Kandice’s grandfather, a civil rights activist murdered in 1968, helped found the busing program and her mother was among the first black students bused to the suburbs in the late 1960s. Through cinema verité and interviews, the film weaves together Kandice’s current school life with a family history that has been profoundly shaped by racially integrated educational experiences. With more than fifty years separating Kandice’s story from the landmark Brown vs. the Board of Education decision, this compelling film illustrates the ways in which a truly desegregated education system is still an unachieved goal in this country.
Learn more