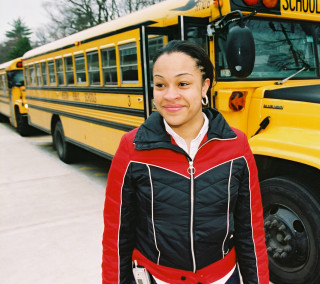 A film by Rachel Tsutsumi

While busing may be a rapidly fading memory in most American schools, it continues to be a reality for more than 3,000 Boston students every year. FAR FROM HOME spotlights Kandice, an insightful, precocious African-American teenager participating in METCO, a voluntary Boston school integration program. Since kindergarten, she has risen before dawn each day to be bused to Weston, an affluent, predominantly white suburb. Now in her last two years of high school, she takes us inside her personal triumphs and daily negotiations: serving as the first black class president, playing the college admissions game, defying stereotypes she feels from white society, living up to her family’s tradition of activism. Kandice’s grandfather, a civil rights activist murdered in 1968, helped found the busing program and her mother was among the first black students bused to the suburbs in the late 1960s. Through cinema verité and interviews, the film weaves together Kandice’s current school life with a family history that has been profoundly shaped by racially integrated educational experiences.

With more than fifty years separating Kandice’s story from the landmark Brown vs. the Board of Education decision, this compelling film illustrates the ways in which a truly desegregated education system is still an unachieved goal in this country.

“Recommended. [Kandice’s] experience[s] of what it is like being a black student in a white community are told honestly and candidly. More than a story of busing and race it is a personal story worth watching.”

“Issues of race, busing, and segregation in America’s schools are seldom addressed in such a straightforward and honest manner... This powerful and moving portrait of an African-American teenager is a wake-up call and must be seen by teenagers and anyone who works with them.”

“..a rich source of ideas for bringing some difficult discussions to the forefront …an excellent professional development source for our work on anti-bias teaching and learning practices … as we strive to promote high standards and achievement for all students. ”

“Juxtaposing discussions with her class mates about the impact of affirmative action against conversations with her family about the murder of her grandfather, an integration activist and one of the founders of METCO, this film documents the distances- socially, culturally, and academically- between the educational opportunities available to children in America.”

“A powerful depiction of what a Boston student enrolled in the METCO program endures on a daily basis to succeed.”

“…a compelling and provocative look at the continuing struggle for a truly desegregated educational system more than fifty years after Brown vs. the Board of Education.”

“A poignant coming-of-age story…Touching…engages the viewer as if Kandice were a member of the family.”

“An engaging look at an unforgettable young woman.”

Rachel Tsutsumi began her career as an editor of illustrated art books. Following her work in publishing, she worked as a video producer at Teachscape, a company that provides online professional development to public school teachers. During this time she independently produced, directed, and shot the documentary FAR FROM HOME. The film was the winner of CNN/HBO’s Life Through Your Lens grant award and aired on CNN in 2005. Rachel grew up in the Boston area and attended high school in Reading, MA. She is a graduate of Yale University and lives in New York City. (09/09)

THERE GOES THE NEIGHBORHOOD intimately follows an extended Black family of View Park-Windsor Hills, California as they experience changes due to gentrification and reflect on their shifting community.
Learn more
Shopping Cart