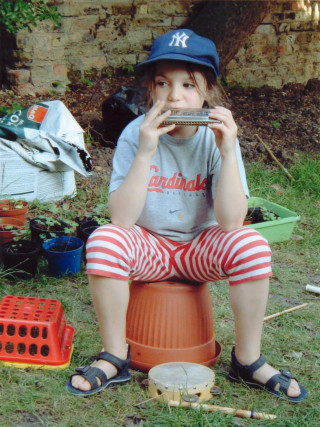 A film by Julie Akeret and Christian McEwen

Are tomboys tamed once they grow up? This lively and inspiring documentary explodes that archaic myth with the stories of proud tomboys of all ages: African-American teenager Jay Gillespie; Massachusetts firefighter Tracy Driscoll, lesbian artist Nancy Brooks Brody and the inimitable political activist Doris Haddock, aka “Granny D”, whose walk across America in support of campaign finance reform has gained global attention. Interviews with these feisty women are intercut with personal photographs and archival footage to celebrate tomboys of all ages. Exploring the myriad ways gender identity is constructed from a very young age, TOMBOYS makes the connections between rebel girl and spirited women gloriously clear. With additional commentary by girls’ studies pioneer Carol Gilligan, these tales of energy and enterprise are a revelation to us all.

“An excellent video not only for the general public but also for those who work with girls and young people. It emphasizes the importance of diversity and the value of encouraging all children to explore who they are and who they want to be."

"Elicits laughter, tears and deep satisfaction. It is perfect for use in high school and college classes."

“A rambunctious documentary that gets to the heart of the matter by talking with ‘tomboys’ of all ages and what it feels like to be embodied, lively, and full of themselves”

“…offers insights into the ways that spirited women have defied convention. The film should empower girls and hearten those who dare to be different.”

Julie Akeret is an Emmy-award-winning documentary filmmaker with a BA from Columbia University in psychology. For the past thirty years, she has worked in various capacities of the film industry as a sound editor, camera operator, director and producer. Her films focus on education, the arts, and rights issues. Her first film, Not Just Garbage, a film about Mierle Ukeles, artist-in-residence at the New York City Department of Sanitation, premiered at the New York City Department of Cultural Affairs and won Best Documentary Short in the USA film Festival in 1986. Julie received a fellowship from the Massachusetts Cultural Council and grants from foundations such as the Massachusetts Foundation for the Humanities, The Sister Fund and the Community Foundation of Western Massachusetts among others. In 2012, Julie received a Boston/New England Emmy for Theatre on the Edge, a film exploring the collaborative process at Double Edge, a laboratory theatre based on a farm in Western Massachusetts. Big Ideas for Little Kids: Teaching Philosophy through Picture Books, released in 2015, also received a Boston/New England Emmy and was acquired by APT for national distribution. Julie Akeret's films are distributed nationally to educational institutions through Women Make Movies, Filmakers Library and Bullfrog Films. Julie now lives in Leeds, Massachusetts with her husband and two children. (01/20)

Christian McEwen is a freelance writer and cultural activist. Her play, "Legal Tender: Women and the Secret Life of Money", opened in Spring 2014 with four sold-out performances. Her latest book is World Enough & Time: On Creativity and Slowing Down (2011), now in its fifth edition. A linked booklet of "slow quotes" - The Tortoise Diaries - will appear in Fall 2014.

A collection of her poems, "In the Wake of Home," was published by Meadowlark Press in 2004.

McEwen has taught poetry to teachers through the Creative Arts in Learning Program at Lesley University, and also worked as a writer-in-the-schools through the Teachers & Writers Collaborative and ALPS (Alternative Literary Programs). McEwen lives in Northampton, Massachusetts. (8/14)

This popular documentary from Toronto filmmakers Maya Gallus and Justine Pimlott takes viewers inside the adrenaline-fueled phenomenon of women’s roller derby. With over 1,400 leagues worldwide, it is now the fastest growing women’s sport. DERBY CRAZY LOVE accompanies Montreal’s top team, New Skids on the Block, on its exhilarating journey to regional championships, where they face off in a pitched battle against U.K. powerhouse, London Rollergirls, and reigning world champions, New York’s Gotham Girls. New Skids players and their British and U.S. rivals share stories of being powerful women in traditional sports, along with insights about derby’s recent rebirth, after decades of decline, as a vibrant, original expression of third wave feminism and Amazon-like physicality rooted in punk’s colorful DIY counterculture. Deftly tackling issues of masculinity, femininity, aggression, body image, queer identity and gender norms, this fast-paced yet reflective film captures the spirit of community, inclusiveness, and sisterhood at roller derby’s core today.
Learn more

Who is a woman and who gets to decide?
Learn more
Shopping Cart