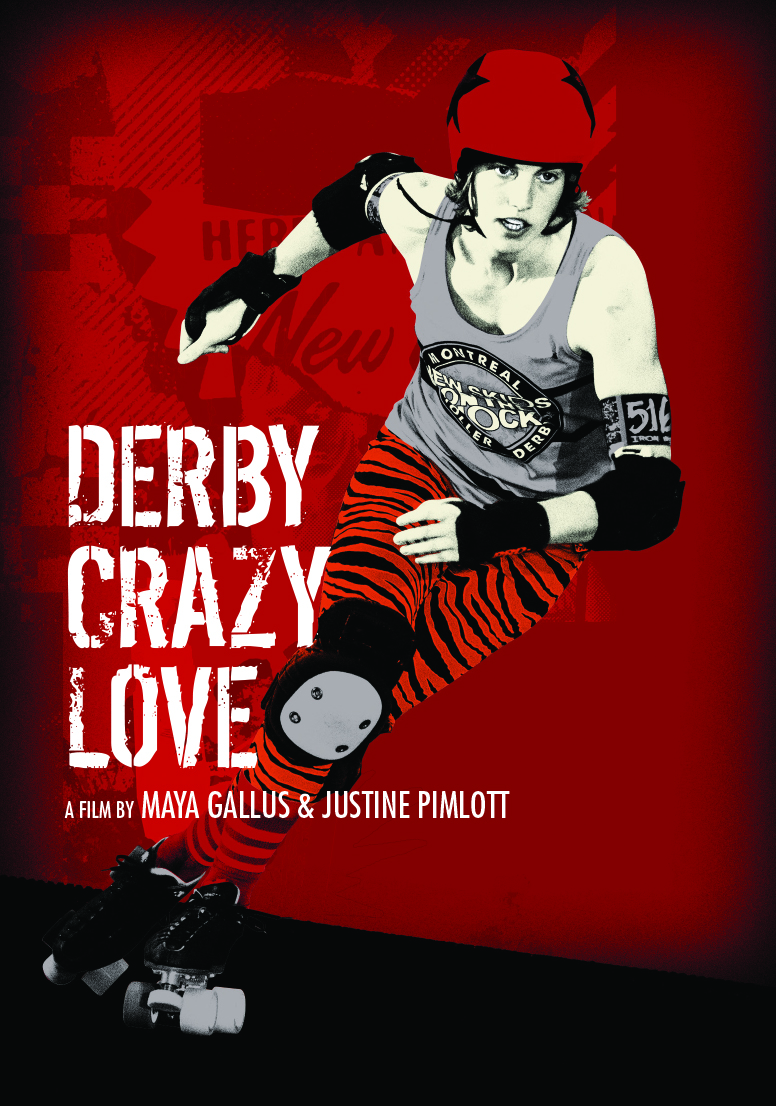 This popular documentary from Toronto filmmakers Maya Gallus and Justine Pimlott takes viewers inside the adrenaline-fueled phenomenon of women’s roller derby. With over 1,400 leagues worldwide, it is now the fastest growing women’s sport.

DERBY CRAZY LOVE accompanies Montreal’s top team, New Skids on the Block, on its exhilarating journey to regional championships, where they face off in a pitched battle against U.K. powerhouse, London Rollergirls, and reigning world champions, New York’s Gotham Girls. New Skids players and their British and U.S. rivals share stories of being powerful women in traditional sports, along with insights about derby’s recent rebirth, after decades of decline, as a vibrant, original expression of third wave feminism and Amazon-like physicality rooted in punk’s colorful DIY counterculture. Deftly tackling issues of masculinity, femininity, aggression, body image, queer identity and gender norms, this fast-paced yet reflective film captures the spirit of community, inclusiveness, and sisterhood at roller derby’s core today.

"The film deftly tackles the stereotypes of masculinity, femininity and the inherent aggression both genders possesses."

"DERBY CRAZY LOVE takes us to the heart of one of the last decade’s most thrilling sporting phenomena."

"The “DIY punk rock” environment is what keeps roller derby true to its core of being community-oriented and inclusive…people who feel marginalized because of their gender identity or sexual orientation find a safe space to play sports."

"As gritty as any doc set in the wide and wild world of sport, DERBY CRAZY LOVE is also as revealing as any in the genre."

Are tomboys tamed once they grow up? This lively and inspiring documentary explodes that archaic myth with the stories of proud tomboys of all ages: African-American teenager Jay Gillespie; Massachusetts firefighter Tracy Driscoll, lesbian artist Nancy Brooks Brody and the inimitable political activist Doris Haddock, aka “Granny D”, whose walk across America in support of campaign finance reform has gained global attention. Interviews with these feisty women are intercut with personal photographs and archival footage to celebrate tomboys of all ages. Exploring the myriad ways gender identity is constructed from a very young age, TOMBOYS makes the connections between rebel girl and spirited women gloriously clear. With additional commentary by girls’ studies pioneer Carol Gilligan, these tales of energy and enterprise are a revelation to us all.
Learn more

Boxing champion Michele Aboro grew up in South London, where life for a girl was never easy, let alone for a mixed-race lesbian girl. Thanks to her tenacious spirit and an uncanny talent for combat sports, she put her difficult past behind her and managed to sign a contract with the biggest boxing promoter in Europe. She won all 21 fights, 18 of them with a knockout - an exceptional achievement in women’s boxing. But despite her spectacular record in the ring, her career came to a sudden halt when her promoter broke her contract under the belief that she was not "promotable." Refusing to vamp up her image and pose naked in magazines, this undefeated world champion was abandoned by an industry more interested in selling sex than sport. A KNOCK OUT interweaves Aboro’s personal story with interviews with boxers whose wild success strikes a painful contrast with Aboro's struggles. Searching for logic behind Aboro’s case, this poignant documentary captures a universal story of fighting for one's identity and offers a probing look at the intersection of gender, ethnicity, sexuality and the increased commercialization of women's sports.
Learn more

Tracing the influence of the Women’s Movement’s Second Wave on art and life, THE HERETICS is the exhilarating inside story of the New York feminist art collective that produced “Heresies: A Feminist Publication on Art and Politics” (1977-92). In this feature-length documentary, cutting-edge video artist/writer/director Joan Braderman, who joined the group in 1975 as an aspiring filmmaker, charts the collective’s challenges to terms of gender and power and its history as a microcosm of the period’s broader transformations. On the road with her camera crew from New Mexico to Italy, Braderman reconnects with 28 other group members, including writer/critic Lucy Lippard, architect Susanna Torre, filmmaker Su Friedrich, and artists Ida Applebroog, Mary Miss, Miriam Schapiro, and Cecilia Vicuña. Still funny, smart and sexy, the geographically dispersed participants revisit how and why they came together and the extraordinary times they shared—supporting and exploring women’s art and demanding the right to be heard. Enlivened by striking digital motion graphics, THE HERETICS intercuts interviews with archival film clips, video and stills from the period, texts and images from “Heresies” magazines, and footage of completed artworks and works-in-progress. An exuberant, multi-layered collage, the film brings the Heresies collective—and its strategies for unlocking the potential in women’s lives—vividly to the screen.
Learn more

Thulasi, a young Indian woman in her twenties, is literally willing to box her way out of poverty and into a better life. A Dalit or “untouchable” born outside of caste, she rejected her place on society’s lowest rung at an early age and was forced to leave her parents’ home when only 14. Ten years later, despite her impressive record in the ring, ranking 3rd in India’s Light Fly category, Thulasi remains stuck at the bottom, deprived of opportunities she rightly deserves. Despite an uphill battle against sexual harassment, poverty and the pressure to marry, Thulasi refuses to compromise herself and her goals and takes her destiny into her own hands. Filmed during three eventful years, LIGHT FLY, FLY HIGH is a beautifully shot, gripping and inspirational story of a courageous young woman who refuses to be anyone’s victim and ends up a hero of her own making against all odds.
Learn more
Shopping Cart