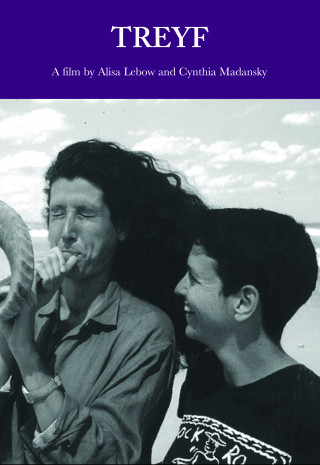 A film by Alisa Lebow and Cynthia Madansky

TREYF —“unkosher” in Yiddish— is an unorthodox documentary by and about two Jewish lesbians who met and fell in love at a Passover “seder”. With personal narration, real and imagined educational films, and haunting imagery, filmmakers Alisa Lebow and Cynthia Madansky examine the Jewish identity of their upbringings and its impact on their lives. Incisive cultural critics, astute, poignant, and poetic—never cynical—they weave their way from New York to Jerusalem in pursuit of a progressive, secular Jewish identity that draws from their childhood reminiscences as much as from their contemporary queer lives. As referenced in Alisa Lebow’s book First Person Jewish, TREYF is iconoclastic and intelligent, humorous and poignant, a personal journey from kibbutz summers to coming out, from keeping kosher to “Bat Mitzvahs.” A reflection on culture, community, and individual desire, this witty film follows the filmmakers as they discover what they thought was most profoundly “treyf” about their worldviews still has roots in Jewish history.

“Courageous, angry, witty, and joyous, this docu-diary examines the construction of lesbian Jewish-American identities with unflinching honesty and considerable love.”

“Far more than autobiographical navel-gazing, this is a thoughtful exploration of contemporary Jewish identity—the Holocaust, religious practices and Israel—as well as how Jewish American lesbians of different ages and races live their lives with regard to family, homophobia, Judaism and anti-Semitism.”

Alisa Lebow is a writer and independent video- and filmmaker. In 1995 she completed a half-hour video on HIV and substance use in the gay Latino community entitled ASI ME GUSTA. In 1994 she made OUTLAW, starring Leslie Feinberg. Her other credits include Associate Producer on the award-winning documentary film about women and AIDS, THE HEART OF THE MATTER (Hollibaugh/ Retticker, 1994) which aired on POV in July 1994; and Line Producer on Ellen Spiro's ITVS-sponsored video, GREETINGS FROM OUT HERE (1993). Lebow has curated several film and video programs for The Festival in New York and a queer Jewish program for MIX '94, HAVA-NA-GAY-LA. Lebow is an adjunct professor of Cinema Studies at NYU where she is pursuing her PhD. (8/14)

Cynthia Madansky (co-producer, director, writer) is a filmmaker, visual artist, and graphic designer. She recently completed a conceptual art installation entitled "On the Jewish Question." In 1995, she also made two short films: INTERNAL COMBUSTION (distributed by Video Data Bank) in collaboration with Alisa Lebrow, and WE AT HER, shown at the Jerusalem Cinematheque and screened at the prestigious Feminale in Cologne, 1996. In 2002, she completed another film, PAST PERFECT which premiered at the Rotterdam Film Festival. Madansky is a graduate of the Cooper School of Art, Whitney Independent Study Program, Bezalel Academy of Art in Jerusalem, and has completed her MFA at the Mason Gross School of Art, Rutgers University. Her films have been exhibited at the Museum of Modern Art and her other work in East and West Jerusalem, Caracas, Sydney, Paris, Montreal, Toronto, San Francisco, and NYC.

She has recently finished 1+8, documenting life in Turkey and the eight surrounding countries. (8/14)

During the 1970s and 80s, thousands of New York’s primarily Jewish senior citizens migrated to Kings Point, a retirement community in Florida. Lured by blue skies, sunshine and the promise of richer social lives, they bought paradise for a mere $1,500 down payment. 2013 Academy Award® nominee for Best Documentary (Short Subject), KINGS POINT tracks the stories of five residents of this typical retirement complex who arrived decades ago with their health intact and spouses by their sides. Now that they and their community, comprised primarily of widowed women, face advanced age and mortality, paradise demands a higher price. Through candid interviews the film exposes the dynamic interplay of their desire for independence, need for community, and ambivalence toward growing old. Filmmaker and Emmy® nominee Sari Gilman deftly balances seriousness with humor, providing a bittersweet look at love, loss and self-preservation as well as a deeply empathetic portrait of aging in America and the American Dream’s last act.
Learn more