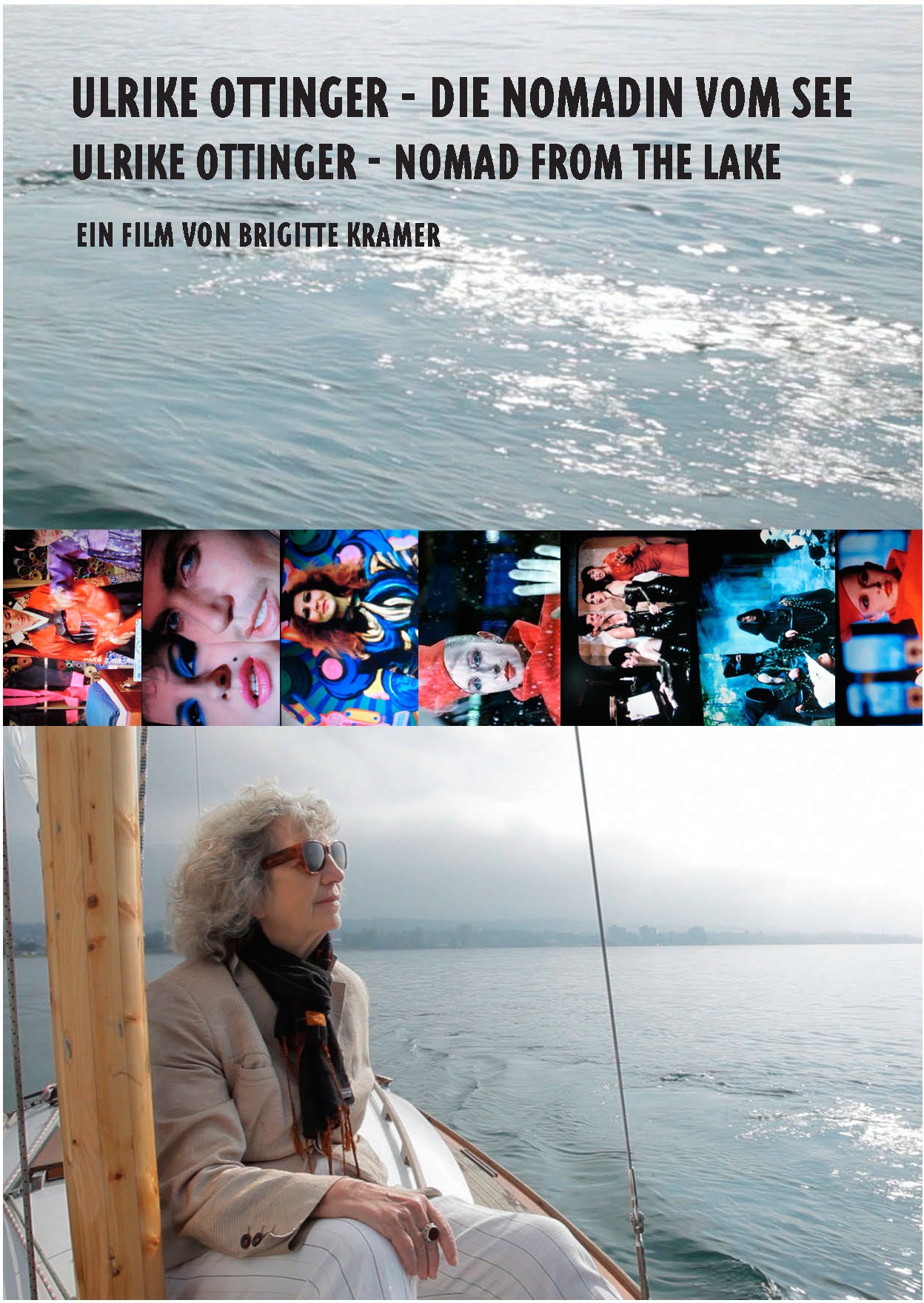 Ulrike Ottinger - Nomad from the Lake

A film by Brigitte Kramer

This intimate personal portrait of Ulrike Ottinger, a unique, influential voice in women’s cinema for over four decades, begins at the lakeside city of Constance, where she was born and started her career. Describing key moments in her life, including the impact of student protests in Paris and her move from painting to filmmaking, Kramer traces Ottinger’s artistic development. Excerpts from her films, notably Madame X; Dorian Gray in the Mirror of the Yellow Press; Johana d’Arc of Mongolia; and documentaries shot in Asia (recently released by WMM), explore her luxuriant cinematic style combining fact and fiction in opulent, idiosyncratic images. Interviews with collaborators and friends offer further insights into Ottinger’s singular body of work. A richly rewarding close-up of the woman director who, along with Margarethe von Trotta and Helke Sander, helped launch New German Cinema on world screens, ULRIKE OTTINGER—NOMAD FROM THE LAKE is an indispensable companion for any Ottinger film.

"One of the leading German and worldwide avant-garde filmmakers... The subjects of her films, be they historical or imaginary figures, are always portrayed from a feminine perspective which constantly opens up into other worlds."

"Ottinger seamlessly convenes imagination with reality in her unique style of storytelling, and it is this ease in combining forms, along with her adventurous curiosity, that cements her place in art cinema"

"Deliriously sumptuous and transgressive, Ulrike Ottinger 's world can hardly be confused with humdrum reality. Watching her films is like traveling through an undiscovered country of marvels, a journey alternately dazzling, infuriating, hilarious, and rewarding.”

Born in Konstanz in Germany in 1954, she studied politics and German language and literature in Marburg and subsequently worked as a dramatic advisor at Frankfurt’s Schauspiel theatre. From 1980-95 she was a commissioning editor for ZDF’s Kleine Fernsehspiel and from 1995-97 she produced films for the Documenta X together with Catherine David. She has worked with Raoul Peck, Aleksander Sokurov and others. Since 1990 she and Jörg Jeshel have directed a number of documentaries and dance films including a screen adaptation of a Sasha Waltz choreography. A resident of Berlin, she has been a freelance dramatic advisor since 1996. (3/13)

Ulrike Ottinger's epic adventure traces a fantastic encounter between two different worlds. Seven western women travelers meet aboard the sumptuous, meticulously reconstructed Trans-Siberian Express, a rolling museum of European culture. Lady Windemere, an elegant ethnographer played by the incomparable Delphine Seyrig in her last screen role, regales a young companion with Mongol myths and lore while other passengers-a prim tourist (Irm Hermann), a brash Broadway chanteuse and an all-girl klezmer trio-revel in campy dining car cabaret. Suddenly ambushed by a band of Mongol horsewomen, the company is abducted to the plains of Inner Mongolia and embark on a fantastic camel ride across the magnificent countryside. Breathtaking vistas, the lavish costumes of Princess Ulun Iga and her retinue, and the rituals of Mongol life are stunningly rendered by Ottinger's cinematography. Dubbed a female Lawrence of Arabia and just as sweepingly romantic, JOHANNA D'ARC OF MONGOLIA is a grandly entertaining, unforgettable journey.
Learn more

"Ulrike Ottinger has a larger body of work than almost any other lesbian filmmaker, and her rarely seen first feature contains most of the elements that make her work so unique and ahead of its time. In this extravagantly aestheticized, postmodern pirate film she appropriates the male genre for feminist allegory. Madame X — the cruel, uncrowned ruler of the China seas — promises "gold, love, and adventure" to all women who'll leave their humdrum lives behind. Gathered aboard her ship, Orlando, are a range of types: a frumpy housewife, a glamorous diva, a psychologist, a very German outdoorswoman, a bush pilot, an artist (played by Yvonne Rainer), and a "native" beauty. Their utopia devolves into betrayal and self-destruction—leading to eventual transformation—as the power games of the outside world are ritualized among the women. Tabea Blumenschein, who designed the film's outrageous costumes, appears in a dual role as the pirate queen and the ship's lovely, leather clad figurehead. Refusing conventional storytelling and realism for a rich, non-synchronous soundtrack, the film invites its audience along for an unprecedented journey that celebrates the marginal." — Patricia White, Swarthmore College
Learn more

A portrait of two unusual but also extremely different women. One rich, eccentric, hiding her feelings behind a rigid mask, consciously drinks herself to death. The other is a known drinker in town. In the course of the story they try to get to know each other, but they cannot come together. The background is Berlin, thrown open to a grotesque kind of sightseeing (drinkers’ geography) and complemented by authentic contributions from people who live here or are visiting, rock singers, writers, artist, taxi drivers. With Tabea Blumenschein, Magdalena Montezuma, Nina Hagen and Eddie Constantine.
Learn more

Ulrike Ottinger’s provocative mélange of ethnography, stunning tableaux and baroque vignettes was inspired by what she calls the “well-stocked miracle” of Korean wedding chests, assembled according to time-honored customs. This exploration of love and marriage in South Korea looks closely at ancient and present-day rituals, revealing what is old in the new and new in the old. Her inquiry leads us from shamans, temples and priests, to the enchanted maze of 21st-century Seoul, where vendors of medicinal herbs co-exist with high-tech beauty salons for wedding couples and secular marriage palaces. Using film much like a canvas, Ottinger creates a modern fairytale flush with mythological heroes, traditional rites, ancestral symbolism, dreams of eternal love, and a whole lot of Western kitsch. One of her most acclaimed documentaries, it captures the amazing phenomenon of new mega-cities and their contradictory societies caught in a balancing act.
Learn more

In the Echigo region of northwestern Japan, where heavy snow blankets entire landscapes and villages for more than half the year, a distinctive way of life has evolved. Time follows a different, slower rhythm, and everyday routines, along with religious rituals, wedding traditions, festivals, foods, songs, and games, are adapted to Echigo’s austere living conditions and natural beauty. Ulrike Ottinger’s latest film leads us into this mythical country, turning her lens on daily and communal life under the snowy mountains. Narrated in English by American literary and media theorist Lawrence A. Rickels, this stunning documentary sequences merge with the tale of students Takeo and Marko, played by Kabuki performers. Their journey through the past and repeated encounters with the present find them wondrously transformed with help from a beautiful vixen fox. Under Snow is clear evidence that Ottinger, whose career spans more than four decades, remains one of world cinema’s most original artists.
Learn more

In GOLDEN GATE GIRLS author and professor S. Louisa Wei tells the story of filmmaker Esther Eng, the first woman to direct Chinese-language film in the US, and the most prominent woman director in Hong Kong in the 1930’s. A San Francisco native and open lesbian, her contribution to film history is sadly overlooked – her 11 feature films mostly lost. After the retirement of director Dorothy Arzner in 1943 and before Ida Lupino began directing in 1949, Eng was the only woman directing feature length films in the US. Wei’s documentary paints a fascinating picture of how Eng’s career in filmmaking broke through gender and racial boundaries in Hollywood and Hong Kong, at a time when opportunities for Chinese women in the industry were few and far between. With a captivating archive of newly discovered images and interviews with those who knew her, Wei uncovers a rich chapter of film history that challenges both gender hierarchies and national narratives. Essential viewing for Cinema Studies and Asian American Studies.
Learn more
Shopping Cart