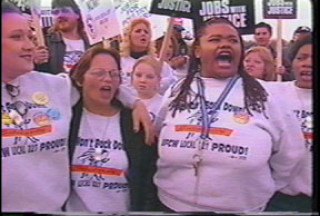 WOMEN ORGANIZE! is an inspirational, half hour film that portrays women organizers across the U.S. who are involved in the global struggles for racial, social, and economic justice. In this film, we meet five women organizers of various backgrounds, peek at the campaigns they wage, and watch as they begin to pick up the tools to document their own transformative work. From working with high schools girls in a low-income neighborhood in Oregon to speaking out for Black lesbians and gays against homophobia or working with Asian immigrant women factory workers in California for decent working conditions, WOMEN ORGANIZE is an important film that should be used in women’s and ethnic studies classes and community based organizations.

"Designed to spark discussion on organizing tactics and strategies while inspiring any audience I can imagine, this short documentary would work well in community study groups and those undergraduate sociology and political science courses that include community-based research, grassroots leadership training, and youth organizing."

"These woman organizers--in our unions and in our communities--are showing us that yes, indeed, it can be done. The spirit of Si, se puede is alive and well, and it is women who are making it happen."

“Women Organize is a refreshing, inspiring portrait of five women whose life work is economic and social justice. Pedagogically and analytically sharp, and deeply moving. A must-see for Women's Studies, Race and Ethnic Studies, Labor Studies, and any curriculum involved with social transformation.”

“The video was very moving. As a filmmaker and an activist, I was thrilled to see these women honored by the video. They, in turn, will be role models and inspirations to other women.”

The Women and Organizing Documentation Project (DC) is a collaboration between a Union Institute Faculty member (NY), the Center for Third World Organizing (CA), and The Women's Educational and Industrial Union (MA) to train and support twenty-five women organizers to analyze, critique and document their work of the past two decades. This eighteen-month project produces a workbook on women's activism across a variety of movements as well as a teaching video. (09/09)

WITHOUT A WHISPER - KONNON:KWE is the untold story of the profound influence of Indigenous women on the beginning of the women’s rights movement in the United States.
Learn more
Shopping Cart